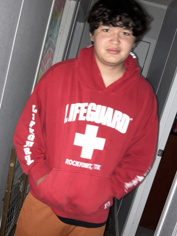 Update: Simon Ulises Montoya, a Kyle teenager who was reported missing Friday, has been found safe, according to the Hays County Sheriff's Office

Original Post: The Hays County Sheriff's Office is searching for a 15-year-old boy who is reportedly in possession of a handgun and may be suicidal.

On Thursday, around 12 p.m., Simon Ulises Montoya left his residence on foot near Schubert Lane in Kyle.

Montoya, who is descrived as approximatley 5-food-4, 170 pounds with black hair and brown eyes, may be wearing the same red hooded sweater as pictured above. He is diagnosed with severe emotional problems. There are concerns that Montoya is suicidal and was recently hospitalized in a local mental health facility. Montoya is reportedly in possession of a handgun and has told a girlfriend that he was going to kill himself.

If you see Simon, do not approach him, please call 911. If you have seen Montoya or have any information regarding his whereabouts, call the Hays County Sheriff’s Office at 512-393-7896. You can also contact Crime Stoppers anonymously by calling 1-800-324-8466 or you can submit your information on-line to Tip Line P3tips.com as well as submit a tip on the Hays County Sheriff’s Office App.