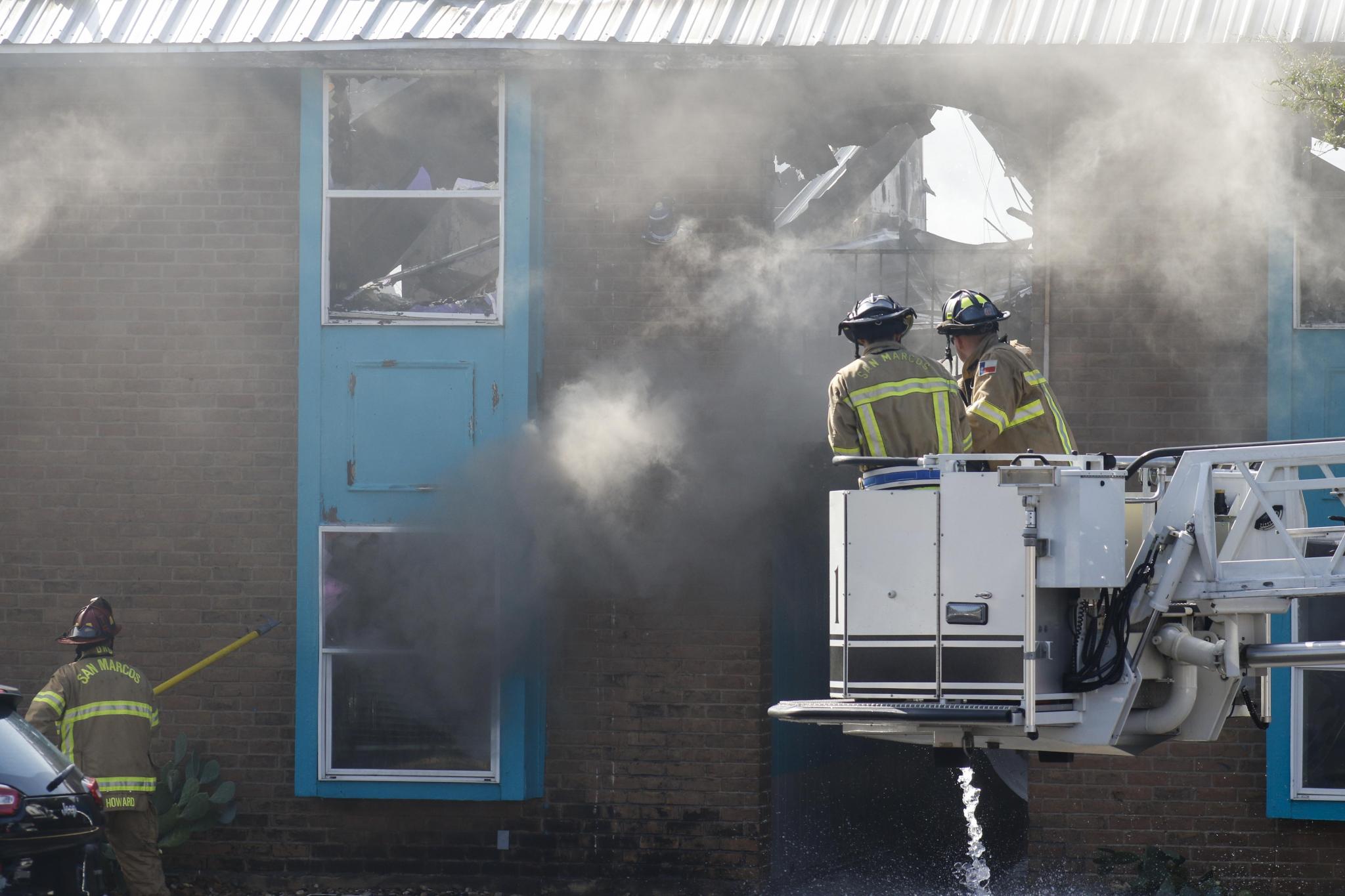 With their platform lowered to ground level, firefighters wait to continue spraying down the building until another firefighter can break open the windows in the apartments facing the parking lot. Daylight streams from a breech in the roof of the buiding, which was one of several that burned. Daily Record Photo by Denise Cathey

Friday afternoon, the smell of smoke lingered in the air near the apartment complexes on North LBJ Drive that were affected by a large fire early that morning. More than 200 people were affected by the fire at Iconic Village and Vintage Pads; several residents jumped out of windows to escape, and officials said that many residents went door to door to get their neighbors out.

Six people reportedly were injured; at least one resident was hurt jumping out of her building. According to city officials, one person suffered critical injuries in the fire and was transported to Brooke Army Medical Center, five sustained non-life-threatening injuries and five remain unaccounted for. Residents of the Iconic Village and Vintage Pads apartments who stayed there last night and have not checked in with the city are being asked to call the information hotline at 512-754-2291.

Streets near the apartment complexes remained blocked off Friday afternoon. Officials also closed the San Marcos River and canceled activities on Spring Lake after residue from the fire made its way into the waters. After environmental testing, the river is set to reopen at 5 p.m.

Before firefighters could completely douse the flames, the community of San Marcos began responding to the needs of those displaced by the fire. The city offered the Activity Center as a shelter for people displaced by the fire who needed a place to go and cool off. CTMC provided meals and the Red Cross was on the scene. A family assistance center will be established at Westover Baptist Church, 1310 Advance St., for people affected by the fire. The city has also set up a hotline at 512-754-2291 for people who need information about the fire and resources available to those who were affected. The San Marcos animal shelter offered temporary homes to the pets of people displaced by the fire, and San Marcos Computers offered free data recovery and free labor for computer repairs for those whose computers were damaged in the fire. The Blanco River Regional Recovery Team is coordinating financial donations. Visit www.br3t.org, click “Donate,” and enter the word “Iconic” in the comments.

At a press conference Friday morning, San Marcos Fire Marshal Kelly Kistner said the investigation could not begin until firefighting operations had ended. Thus, there is no word on the cause or origin of the fire or of conditions in the buildings when the fire broke out. Kistner said the size of the buildings, their proximity to each other and wind all contributed to the challenges firefighters faced.