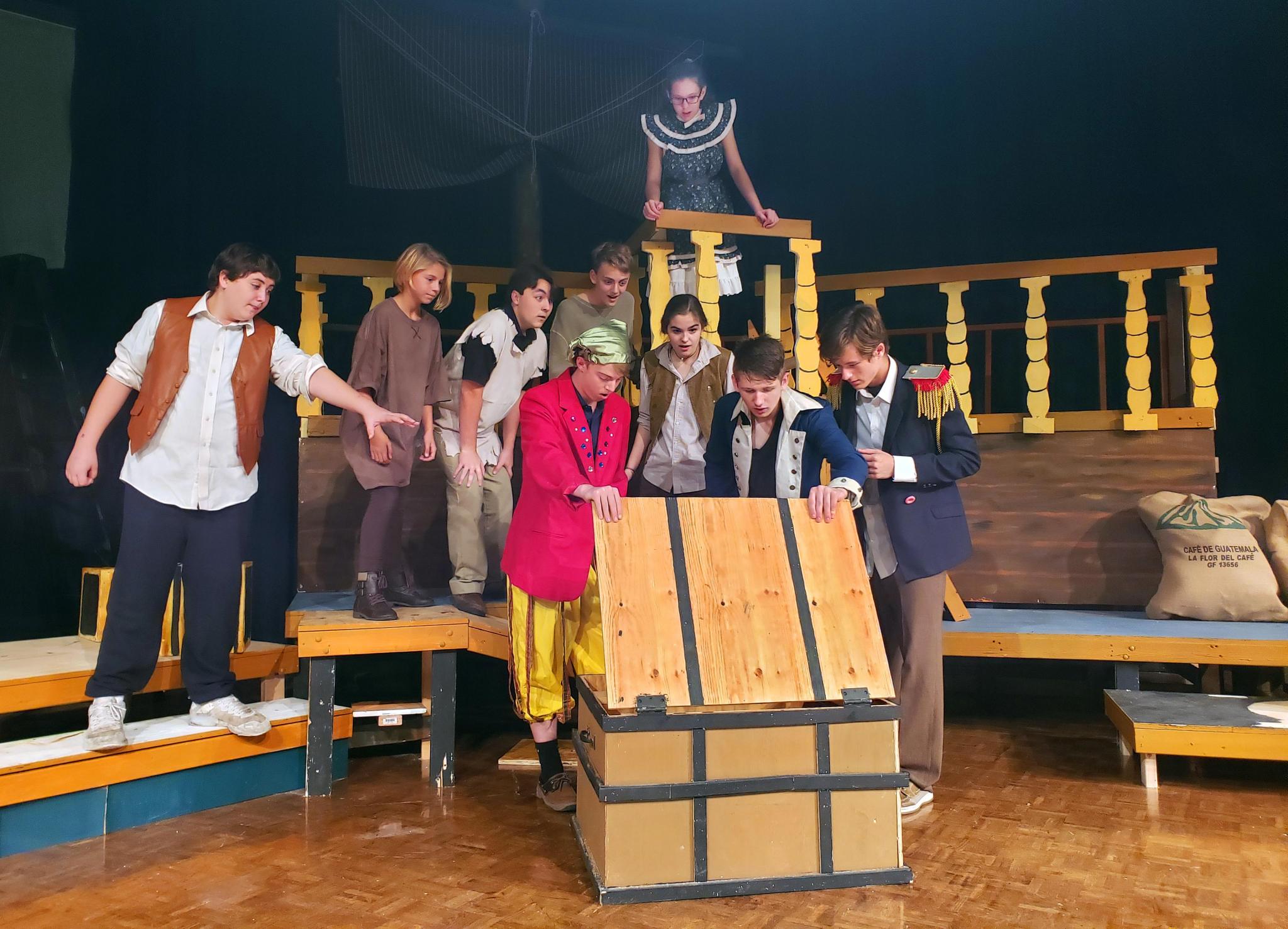 As Molly, Lord Aster, Peter Pan and the Lost Boys look on, pirates Smee and Black Stache find a surprise aboard their ship. The San Marcos Academy is performing "Peter and the Starcatcher" this weekend only. Photo courtesy of SMA

‘Peter and the Starcatcher’

San Marcos Academy’s Theatre Department is putting on a production of "Peter and the Starcatcher," based on the 2004 novel by Dave Barry and Ridley Pearson.

Performances are scheduled for Saturday, Jan. 18 at 7:30 p.m. and Sunday, Jan. 19 at 3 p.m. in the Robinson Christian Center of San Marcos Academy. Admission is free.

Dave Barry and Ridley Pearson’s "Peter and the Starcatchers" and Rick Elice’s theatrical adaptation each act as a prequel to the beloved J. M. Barrie’s play and novel. Each sets up the familiar story of the boy who refused to grow up — preferring, instead, to live in Neverland with his band of Lost Boys and be chased eternally by the pirate Captain Hook.

Both adaptations reveal who Peter was (the Orphan Boy), before he became Peter Pan, explain why he can fly and why he’ll never grow up (the magical starstuff), and how he (through a shipwreck) and the island’s inhabitants came to live on Neverland. Still, the two versions of the story are inherently different, with each taking advantage of its respective medium’s conventions to frame and tell the story.

Story Theatre is used to structure the play. Actors perform both a character role and the role of narrator or story teller. This allows for fluidity of movement and the imagination of the audience to create location and action. The story centers on Molly, played by Selah Portis, an apprentice Starcatcher whose mission is to protect the magical starstuff from falling into the hands of Black Stache and his band of pirates.

As the show opens, two identical trunks are delivered to the port. One contains precious cargo belonging to the queen, who has entrusted Lord Aster, Molly’s father, played by Bennett Blair, to take it to the island of Rundoon aboard the Wasp and destroy it there; the other, meant for the Neverland, contains only sand. The captain of the Neverland, Bill Slank, played by Cortlyn Haresnape, swaps the trunks so that the queen’s cargo is loaded aboard his ship, and the identical trunk is hoisted aboard the Wasp.

Molly is put aboard the Neverland with her nanny, Mrs. Bumbrake, played by Lillian Facile, and promises to meet up again with her father after their mission is complete. Aboard the Neverland, she stumbles on a group of orphans and one in particular catches her eye, Orphan Boy, played by Zach Christensen. Not having a name, Orphan Boy is given the name Peter and the last name of Pan.

All goes awry when Black Stache, played by Ian Faris, and his cohort Smee, played by Truett Martin, and their band of pirates take over the Wasp hoping to claim the starstuff for themselves. Discovering only a trunk full of sand, Stache vows to catch up to the Neverland and capture his treasure. What ensues is a fast paced hunt and hide as Molly, Peter, and the Lost Boys try to elude Black Stache and return the starstuff to Lord Aster while Mrs. Bumbrake, separated from Molly, tries to catch up to her again. She is aided by Alf, a kindly sailor, played by Austin Lee.