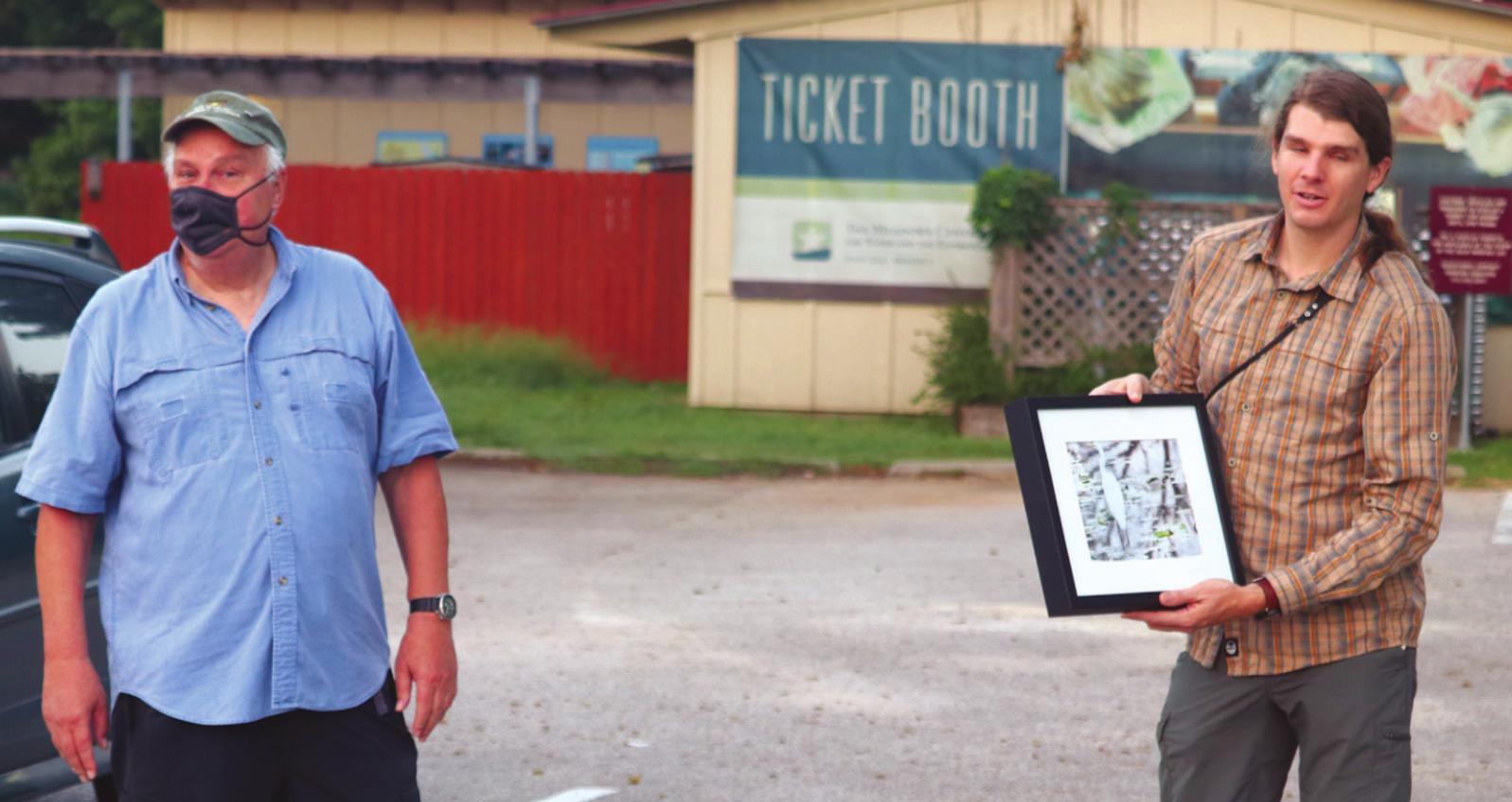 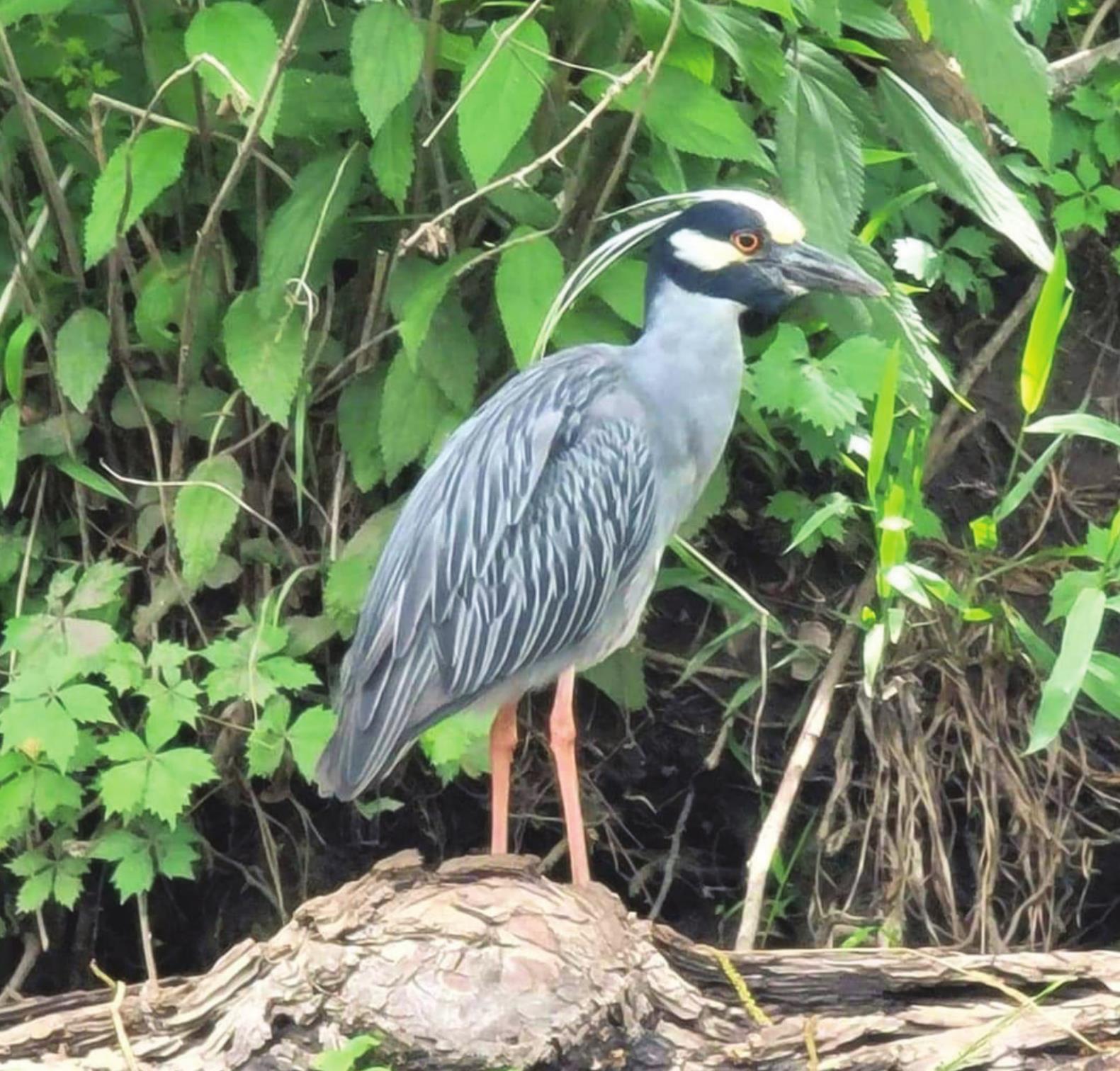 A yellow-crowned night heron perches on a log near the headwaters of the San Marcos River. 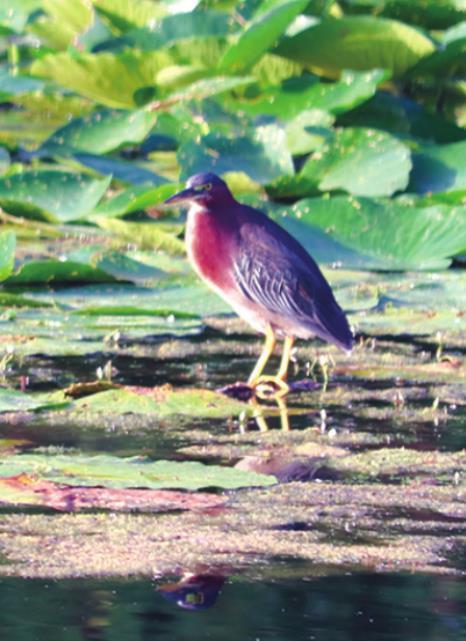 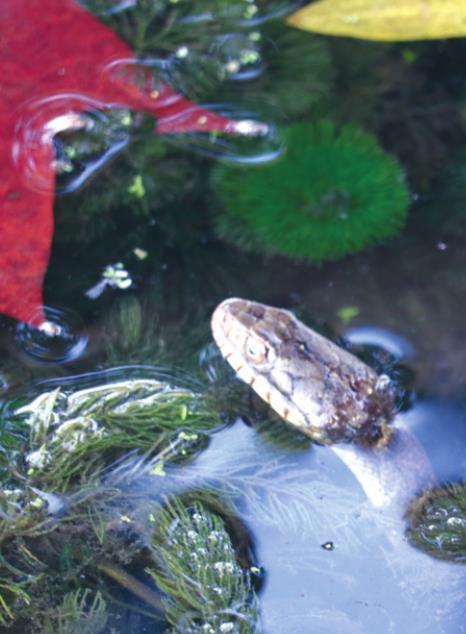 This happy little water snake relaxes in Spring Lake near the Meadows Center. 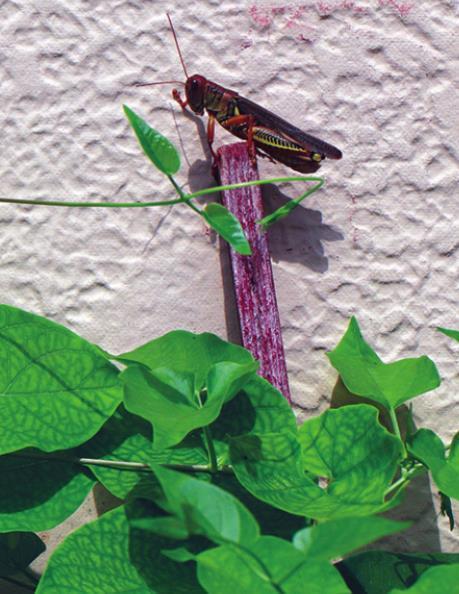 In addition to birds, Ramirez treats Bird Walk participants to a host of diverse wildlife found in the San Marcos area. Photos by Jason Cook

Bird to the Wise

It was one of those perfect San Marcos Saturdays: cool and cloudless, with a light breeze stirring through the trees. At 7 a.m., a small crowd gathered in the Meadows Center parking lot — families with children, pairs and trios of college students, older couples and groups of friends. Some of them had field guides, some had binoculars; all were gathered to hear Texas State graduate Stephen Ramirez talk about birds.

This is not an uncommon occurrence. In fact, for 10 years, Ramirez has been giving these Bird Walks on the first Saturday of every month. At the gathering on Sept. 4, the San Marcos Greenbelt Alliance presented Ramirez with a commemorative framed photograph by Susan Hanson, retired professor and former writer for the Daily Record, to celebrate 10 years of Bird Walks.

“The photo is a Great White Egret taken in the San Marcos River,” said Lance Jones of the SMGA. “It symbolizes Stephen’s passions of the river and birding.

As Ramirez accepted the photograph from Jones, he said, “I’m so excited to be here 10 years later. I’m so happy to do this for the community to introduce people to the beautiful birds around us.”

Ramirez didn’t become curious about the outdoors or birds in particular until he was a college student at Texas State, where he studied Geographic Information Science and mapmaking.

“It basically just hit me one day that there were birds around me and I didn’t know what they were,” Ramirez said. “From that point, I dove into those curiosities and quickly learned all about the birds in San Marcos, and some unique areas in the southwest.”

Ramirez put his Texas State degree to good use in his career of land conservation with the Texas Land Conservancy, where he is the Hill Country Program Director. “I didn’t study biology or ornithology in school,” he said, “but I am a Hays County Master Naturalist and self-taught for various fields in natural science.”

The September Bird Walk took participants around Spring Lake onto the Meadows Center’s Wetlands Boardwalk. Ramirez brought a stationary scope, calibrating it to the group’s smallest member so that everyone would have a chance to look at the birds and wildlife in the park. Before even leaving the parking lot, Ramirez had identified a dozen species of birds, including a pair of red-shouldered hawks, a downy woodpecker, cave and cliff swallows, hummingbirds and the ubiquitous turkey vultures who nest around the headwaters.

“San Marcos is well situated for a diversity of birds,” Ramirez explained. “On the west side of town we have the beginnings of the Edwards plateau with its oak-juniper woodlands and savannas, and on the east side of San Marcos is the open Blackland Prairie, plus the perennial waters of the San Marcos River that runs right between the two habitat regions. A lot of our birds only make short stops during their spring and fall migrations through central Texas, which is part of the central flyway. Birds stay quite attached to their preferred habitats so a diversity of habitats throughout the city creates opportunities to have and see a diversity of birds that favor those habitats.”

Though Bird Walkers turned out to see birds in particular, they also experienced other animals along the way, including water snakes, white-tailed deer and red-ear sliders. They walked at a leisurely pace, taking in the warm morning air while talking excitedly about the various animals they identified.

Because San Marcos is such a suitable habitat for birds and wildlife, Ramirez and others like him make education and conservation a priority. One such person is fellow Bird Walk participant Colton Robbins, who has been a volunteer since 2015. Robbins graduated from Texas State with a degree in Wildlife Biology.

“I took a class and found I loved it,” Robbins said, and has been doing professional bird surveys for seven years in the central Texas area.

In addition to Ramirez and Robbins, the SMGA and the San Marcos River Foundation continue to support conservation efforts in the city.

“We’re fortunate in San Marcos to have a lot of support for protecting and investing in these natural resources,” Ramirez said. “There are opportunities to volunteer with groups like the San Marcos Greenbelt Alliance, San Marcos River Foundation, and the city’s Habitat Conservation Plan/Parks and Rec programs to maintain and improve our open spaces such as managing trails, removing invasive species, and restoring habitats.”

Ramirez conducts the San Marcos Bird Walks every first Saturday of the month at sunrise rain or shine. “We visit different parks and open spaces around San Marcos,” he said. “The exact time and location changes throughout the year, and is posted to the email list and Facebook group (San Marcos Bird Walk) a day or two prior to the event.”

The group is open to people of all ages (no pets, please) and no RSVP is required. Tours typically last an hour and a half, and they’re free.

“Just show up,” Ramirez said, “and we now have access to 10 spare binoculars for those who don’t have any.” Though for cooperative birds, he does set up a telescope.

The San Marcos Bird Walks are an excellent Saturday morning activity to connect with nature and learn about the wildlife in our community.