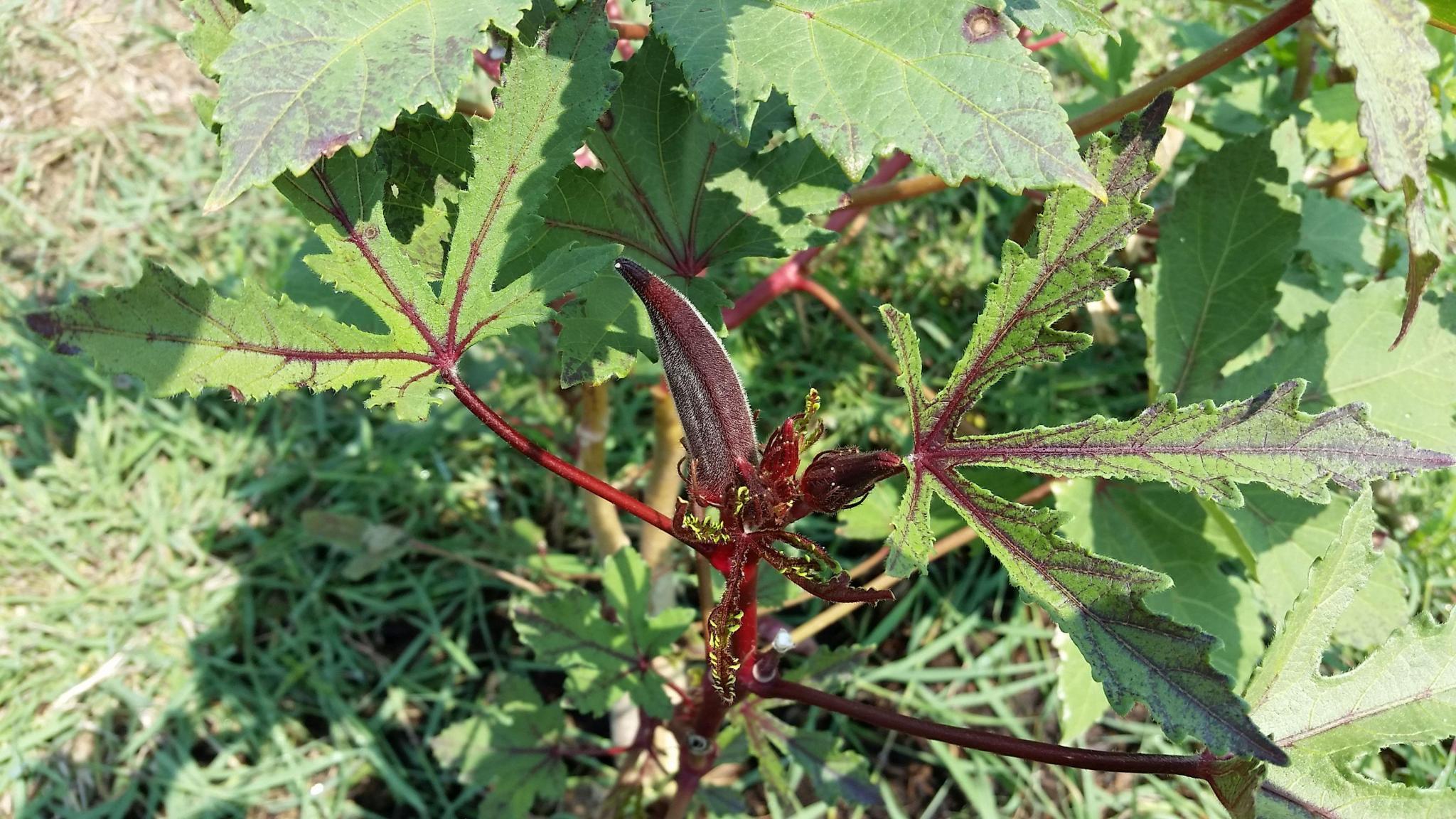 Many heirloom varieties of okra are resurfacing from the gardens of the past, including the Hill Country Red, a vivid velvety red okra from right here in Central Texas. Photo courtesy of Joe Urbach

Okra. With that one word many readers have chosen to move on to another article in the paper. But if you have made it this far you are either a lover of okra (like me), a regular and loyal reader of my column (thanks by the way) or you have some affliction that forces you to continue to read an article once you have started it. Whatever the reason, please keep reading as I hope to provide some interesting okra information below.

Like it or not, you are probably aware that okra is used in southern and Texas cooking and you have probably heard that it is a “controversial” vegetable. Many gardeners north of the Mason-Dixon Line have never even heard of it let alone tried growing it. Folks in the Lone Star State take one of two sides in regard to okra, they either love it or they hate it. No one, and I mean no one at all, seems to fall between these two extremes.

Okra lovers passionately love okra in all manners and shapes and forms. Boiled, fried, steamed, grilled, broiled, pickled, whole, sliced and julienned. Personally, I love it raw right off the vine or sliced in a salad. You name it, okra lovers love okra. Those who hate it think it’s slimy, gooey and gummy. Some even go as far to say it is nothing more than “mucilaginous ick.” I suppose that is fair, but as an okra lover I know that my garden will always have a nice spot for growing okra.

You can start okra seeds indoors in peat pots under full light 3 to 4 weeks before the last spring frost date. You can start it directly in your garden 3 to 4 weeks before the last spring frost date as long as you cover the plants with a cold frame or grow tunnel until the weather warms up. Just ensure that the covering is about three feet tall so that the plants have room to grow. If you do not start your okra plants early, and I did not this year, then you needed to wait until the soil warmed to between 65 and 70 F, and that is now. For me, May is the latest I want to get my spring/summer okra in the ground.

For a good fall crop, I’ll allow the plants to keep going if we have had a mild summer but, in most cases, it is best to plant a new set of okra for a quality fall crop. For that I will plan to have my fall okra seeds in the ground around the first part of August. Okra seed should be planted about 1 inch deep and 4 inches apart in the row. Space the rows at least 30-36 inches apart. As soon as the okra emerges and forms its second true leaves, thin the plants so that they are about 12-18 inches apart. After thinning the okra be sure to side dress with a good rich compost and mulch your okra to help them maintain moisture.

It is not entirely certain from where okra originated, but as it is a main component in making gumbo, we can use that as a clue. There are two main thoughts for the etymology of the word “gumbo.” The first suggests that in Bantu, the language family of Southern Africa, okra is called ngumbo, and this is where gumbo originates. The second is that “gumbo” is simply a corruption of the Portuguese, quingombo, or the word quillobo, which is the native name for the plant in the Congo and Angola. Either case strongly suggests an African origin.

We are sure that we have okra in the United States because native Africans brought it across the Atlantic Ocean during the slave trading era. Little is known about the early history and distribution of okra, but it is thought to have originated in equatorial Africa. It eventually making its way into Northern Africa, the Mediterranean, and India before its journey across the Atlantic to the New World. Okra is not, however, solely found in growing wild in Africa so, the ancient routes by which okra was taken from central Africa to Egypt to the eastern Mediterranean and to India is not certain, but we do know that okra is found in wild abundance in several major areas today; East Africa, India, and Southeast Asia. It is also found in pockets in the Caribbean, as well as in South America.

One thing this is certain is that if the weather gets hot, okra will grow. There are actually 50 species of wild and cultivated okra around the world. According to the USDA, okra grows best in zones 4a through 11 in the United States. One acre of okra usually produces 200 to 250 bushels of okra, or approximately 600-750 pounds. Now that is a lot of gumbo.

Depending on the variety, the plant will tower up to 12 feet in the Texas garden. Clemson Spineless is the favorite hybrid of most gardeners, but many heirloom varieties are resurfacing from the gardens of the past, including Star of David, a stumpy starshaped pod; Hill Country Red, a vivid velvety red okra from right here in Central Texas; and Perkins Mammoth Long Pod, an okra varietal that produces edible pods that can still be eaten at lengths of up to 16 inches. But most okra doesn’t taste good and is not even close to edible when it’s that long; it becomes tough and woody.

In general, look for young, small pods no longer than 4-inches in length, depending on the variety. Okra is called “lady’s fingers” in some countries and that is because when harvesting one should pick pods smaller than a lady’s finger. At the market, buy okra that is firm, unblemished, and brightly colored. Green is the most common color available, but you may also find red or deep burgundy varieties, even pale green, almost white, especially at local farmer’s markets. Make sure to avoid limp, bruised, blemished and moldy pods.

Okra may not be the most conventional vegetable in the garden, but it has a rich content of vitamins and minerals, including B vitamins as well as vitamin A, C, E and K, as per the USDA National Nutrient Database. It also contains calcium, iron, magnesium, potassium and zinc. Furthermore, it contains high levels of nutritious mucilaginous fiber, colloquially called “okra slime.” Most of the health benefits are due to the presence of minerals, vitamins and organic compounds found in it. Okra has potent antioxidant power in its seeds and peel, which specifically help people with Type 2 diabetes. It is also known to help regulate blood glucose levels, aid in digestion, alleviate asthma, help fight fatigue, reduce stress, lower cholesterol levels and aid in hypertriglyceridemia, a condition that occurs when there is a high level of a certain type of fat (triglycerides) in the blood.

The health benefits alone are a great reason to grow okra in your garden, of course you have to eat it to get those benefits but since okra is a multipurpose, drought hardy, easy to grow (you can even grow it in a pot on the patio), and tremendously delicious veggie, that ought to be no worry at all.