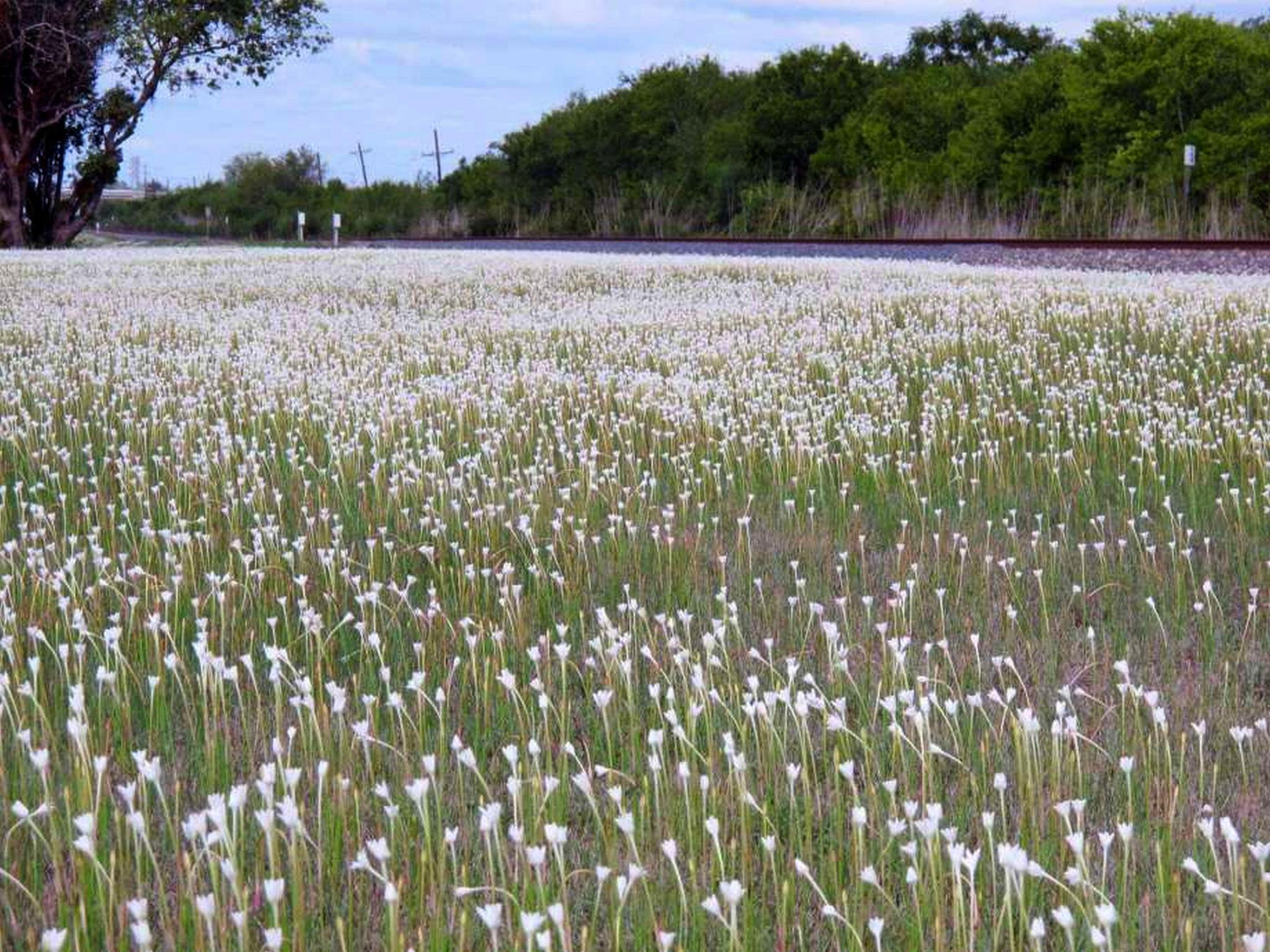 What a refreshing change the first cool weather of fall has made it. After such a brutal summer, the cooler days and nights have been very welcome. And with the cooler temperatures has also come some much-needed rain, several inches in my garden.

One of my favorite things about getting some rain is that the rain lilies make an appearance. Most wildflowers bloom with the seasons, but not rain lilies, these little beauties are free spirits. They bloom a few days after a good rain during spring, summer or fall. The narrow leaves of rain lilies may resemble grass, but no grass produces blooms like those of the rain lily.

Just two days after our recent rain many native grasses began to green up, a few flowers even began to bloom again. Plants that looked dead just days before were sending up seed heads valiantly trying to reproduce before the first frost of the year. But to me, the most spectacular are always the rain lilies.

These white trumpet-shaped flowers pop up just a few days after a good rain and all of us can spot a few popping up here and there. But in certain areas, like my friend Nathan’s property south of Austin, they covered acres. A literal carpet of showy white blooms blanketed one of his pastures in particular.

After the plant soaks up the rain’s moisture, it sends up a green stalk capped by a bud. In an open field, the flower stems may grow up to a foot high. When the stem is sufficiently high, its bud opens overnight into a pure white, trumpet-shaped blossom whose petals gradually spread apart to form one of the most elegant of Texas wildflowers. The bloom looks straight up at the sky for only a day or two before its petals fall.

They say that death and taxes are the two things in life that you can count on — I would like to add rain lilies to that list. Cooperia pedunculata, sometimes called fairy lilies, zephyr lilies or rain lilies, will always show up after a good rain and you can count on it.

They pop up and bloom looking like 6-petaled white flowers but technically they have 3 petals and 3 sepals that look almost identical. The flower is on an unbranched stem that, although it can grow taller, usually reaches around 8 inches high. The blooms start out as a tight trumpet in the evening opening slowly to beautiful fragrant blossom sometimes measuring 2 inches across by morning.

I've seen and photographed many rain lilies over the years, but the explosion of them I experienced after the recent rains last week were by far the most dramatic I've seen in a long, long time. Fields of countless rain lilies placed portions of the Central Texas landscape under a blanket of white that, from a distance, resembled the aftermath of a hail or snowstorm. If you have a camera when you see such a scene, be sure to stop and take photos. The flowers last only a few days, so if you wait until the next day, many of the flowers will already be drooping.

Rain lilies are among many wildflowers set back by drought conditions across Texas. But they grow from bulbs, and this feature makes them particularly drought-tolerant in the wild and even in neglected gardens. Small clusters of them appeared in my yard and elsewhere after each of several summer showers. But let’s face it, we had too little rain during the summer for anything to grow really well and so there were far fewer rain lily blooms than usual.

The rain lily shortage changed dramatically when a cold front pushing a layer of dense moisture-laden air from the north sprayed much of our county with long-awaited rain. The day after a few inches of rain arrived, rain lilies responded with abandon, not everywhere of course, but if you were lucky, you had some in your area.

If rain lilies do grow on your property, and if you want to encourage them to spread, it is good to allow them to go to seed before mowing them. But if you accidentally mow some of them, don’t worry too much, they will be back. That's because rain lily bulbs are underground and not damaged by your mower. The bulbs stay loaded with energy and prepared for a burst of rapid growth when triggered by mother nature’s life-giving rains.

You can help get more of these jewels bursting up in your yard if you want to, it is not hard as they are actually pretty easy to grow. Even though the rain lily is a bulb it will still set seed and reproduce by seed. So, if you see a few clusters popping up, be patient and wait to mow until after the seed has dispersed. This way, when the next rains come, you will likely see an even bigger cluster. Keep repeating the process and in no time at all a good soaking from mother nature will start a burst of rain lilies making their appearance in your yard.

Rain Lilies will grow practically anywhere, and few pests bother rain lilies other than an occasional caterpillar or grasshopper munching the leaves.

The seeds are black and are as shiny as a new pair of black patent leather shoes. Toss the seeds out and in a couple of years you too can experience the magic of the Rain Lily. Like bluebonnets and Indian paintbrushes, rain lilies enjoy company. Often dozens can be found blooming close together in small patches. Once I spot them, I watch for the seeds to appear, I gather them and spread them to other areas of the yard by hand.

Observe the flower, that is easy as its beauty will draw your eye to it, after the flower is gone, you will notice that it leaves behind a capsule neatly packed with stacks of thin, shiny black seeds around a quarter of an inch across. These capsules weigh much more than the flower's discarded petals, so as the seeds mature, the stems gradually droop over to one side of the plant. This keeps competition away from the parent plant while spreading its offspring outward. This is also when I go and gather the seeds.

Once common in pots on Southern porches, rain lilies were passed along by generations of gardeners who shared them with friends and neighbors. This is a tradition we really ought to bring back.