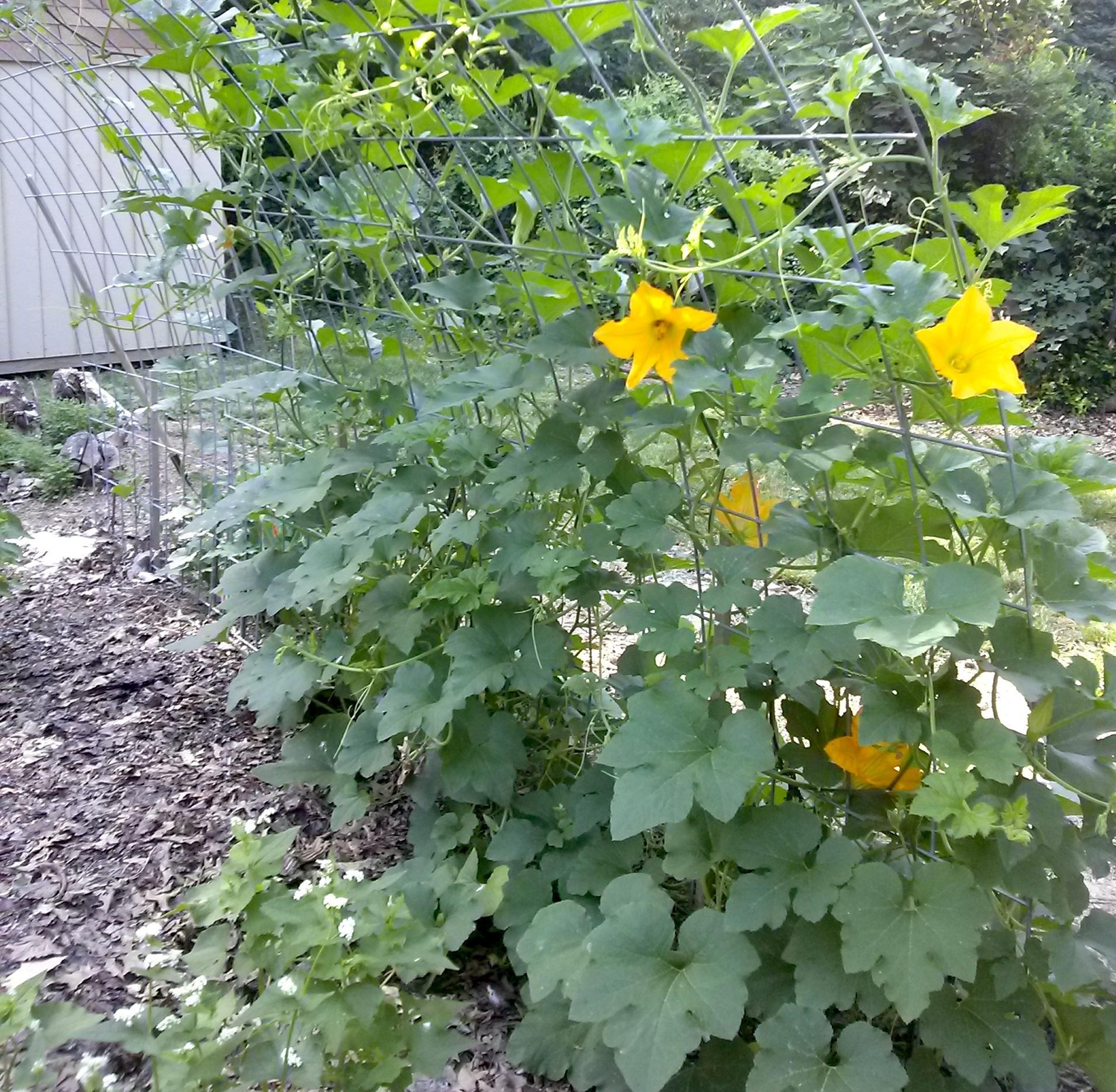 Tatume squash are hardy and productive summer squashes, and almost immune to the squash borer, because of their prolific vining. Photo courtesy of Joe Urbach

Growth in gardening: The Tatume Squash

Do you like to try new things in the garden? If so, then Tatume — also often called "Calabacita" — squash could be a worthy candidate for your next garden experiment.

This hardy, open pollinated native of Mexico grows well in our hot climate and it produces pound after pound of flavorful firmfleshed squash. The long vines are prolific bloomers and they produce a large number of flowers that are beautiful to look at and almost as good to eat as the squash itself.

I first heard about the tatume squash after a summer of battling one of Texas gardener’s most hated foes, the squash vine borer. Once I realized these pests had invaded my garden and were not about to leave, I got mad because almost overnight I had lost almost half of my zucchini plants. I was determined not to have a repeat the next time I planted squash, so I started doing some in-depth research of squash varieties, there had to be one that was more tolerant of these borers. That is when I found the incredible tatume squash.

That next spring, I purchased a small amount of tatume seeds and planted them next to my other summer squash and zucchini. At first all was great; the squashes were all doing well. The tatume squash, I noted, seemed to vine out much more like a winter squash does, not like a typical summer squash that is bushier. It seemed a bit smaller than my other squash and I soon learned that it took a little more time to get going than summer squash, but once it got going it really started to spread.

Then one morning, it happened again; I walked out to water my garden and found that nearly all of my summer squash, half of my zucchini, and even the tatume squash had all become victims of the vine borer. I was devastated and as I began to dig out the infected squash plants, I noticed that the tatume, while infected was still alive and growing. I pulled out the others but left the tatume in place, I watered it and I watched.

I soon realized that Tatume was no normal squash. In a little over a week it had sent out new vines that were over six feet long. Everywhere a node lay against the ground, it rooted and sent out even more shoots. In just two weeks’ time, half of my garden was overrun by these wonderful aggressive plants. I was afraid it would cover the entire garden, but I was comforted by how lovely it was. The vines were covered with beautiful big yellow flowers and there was no more sign of vine borer damage. Then, once it flowered, the growth rate decreased. I decided to do some additional research and see what I had gotten myself into.

What made this variety so much more tolerant to the squash vine borer?

Native to Mexico, the tatume squash is a little-known heirloom vegetable that deserves a lot more attention. Tatume squash is a variety of Cucurbita pepo, the species that makes up most of the squash we know and love. These squash plants are mostly native to Central and South America, where they were domesticated as long as 10,000 years ago. The tatume squash hasn’t traveled much farther than its birthplace.

As far as I can tell, there are only two drawbacks to this amazing squash; finding it and containing it.

Since tatume is an heirloom, or open pollinated variety, it is not carried by all of the major seed companies. It also appears to be the squash of many names. Many seed catalogs list it as "Tatume" or "Tatuma," but I have also seen it listed as "round zucchini," "green pumpkin zucchini" and "Mexican zucchini." In the markets of Mexico, it is most often called "Calabacita" – meaning little pumpkin. Whatever you call it, it is a very versatile and flavorful squash.

Tatume does have an aggressive vining habit. It is not uncommon for this squash to send out vines 10-to-1 feet in length. Each node on a vine can root and send out even more vines, this is how it manages to outwit the squash vine borer. So, if you are going to plant it make sure you have plenty of room to let it run.

Tatume squash is an open pollinated variety or an heirloom variety so you can save the seeds from year to year. The fruits are round or oblate in shape. Their skin is stripped green and they resemble a small watermelon or pumpkin in their immature form. It is best to harvest tatume when it is about the size of baseball. If left to mature, their skin will become a mottled deep green and they can grow to almost the size of a soccer ball.

Tatume is a staple in Mexican cooking. Mexican cooks use this squash in soups, breakfast dishes, casseroles and as a standalone side dish. This past year, my wife and used it in lieu of yellow squash in all of our squash recipes. We have fried it, baked it, boiled it with onions and made it into a casserole. We even harvested and sautéed the blossoms. However, our favorite thing about tatume is the way that it cooks on the grill. Tatume is more flavorful than yellow squash and its flesh is much firmer. Its round shape and firm texture allow it to be cut into thick round patties that are perfect for the grill. A little oil, garlic, salt and fresh ground black pepper make for a simple but delicious summer side dish.

One of my favorite things about this awesome vegetable is that the tatume squash can be harvested as a summer or a winter squash. It’s like getting two for the price — and work — of one.

To harvest it as a summer squash, pick it when it is about the size of a softball or a little smaller. If you want to use it as a winter squash, let it mature on the vine and harvest it when its skin is hardened, and the vines have started to dry out. Like I mentioned above, they can get pretty large, I even mistook one for a small watermelon in my garden last year.

Tatume is a squash variety that possesses all of the traits that make squash one of my favorite summer vegetables to grow. It is hardy and productive, and almost immune to the squash borer, which makes it a reliable garden vegetable in infested areas. Its long vines produce a fabulous show of big yellow flowers that draw bees into the garden. It is tasty and versatile in the kitchen, but keep in mind that if you do plant this variety, the vine is pretty aggressive so be sure to give it some space. Most likely it will end up clear on the other side of the garden from where you planted it.

This squash is so versatile, tastes so great and is so darn hardy, that I knew right away that my experiment with tatume was a success and convinced me to add this delightful veggie to my keeper list. I highly recommend giving it a shot in your garden, especially if you have issues with the squash vine borer in your area like I do.