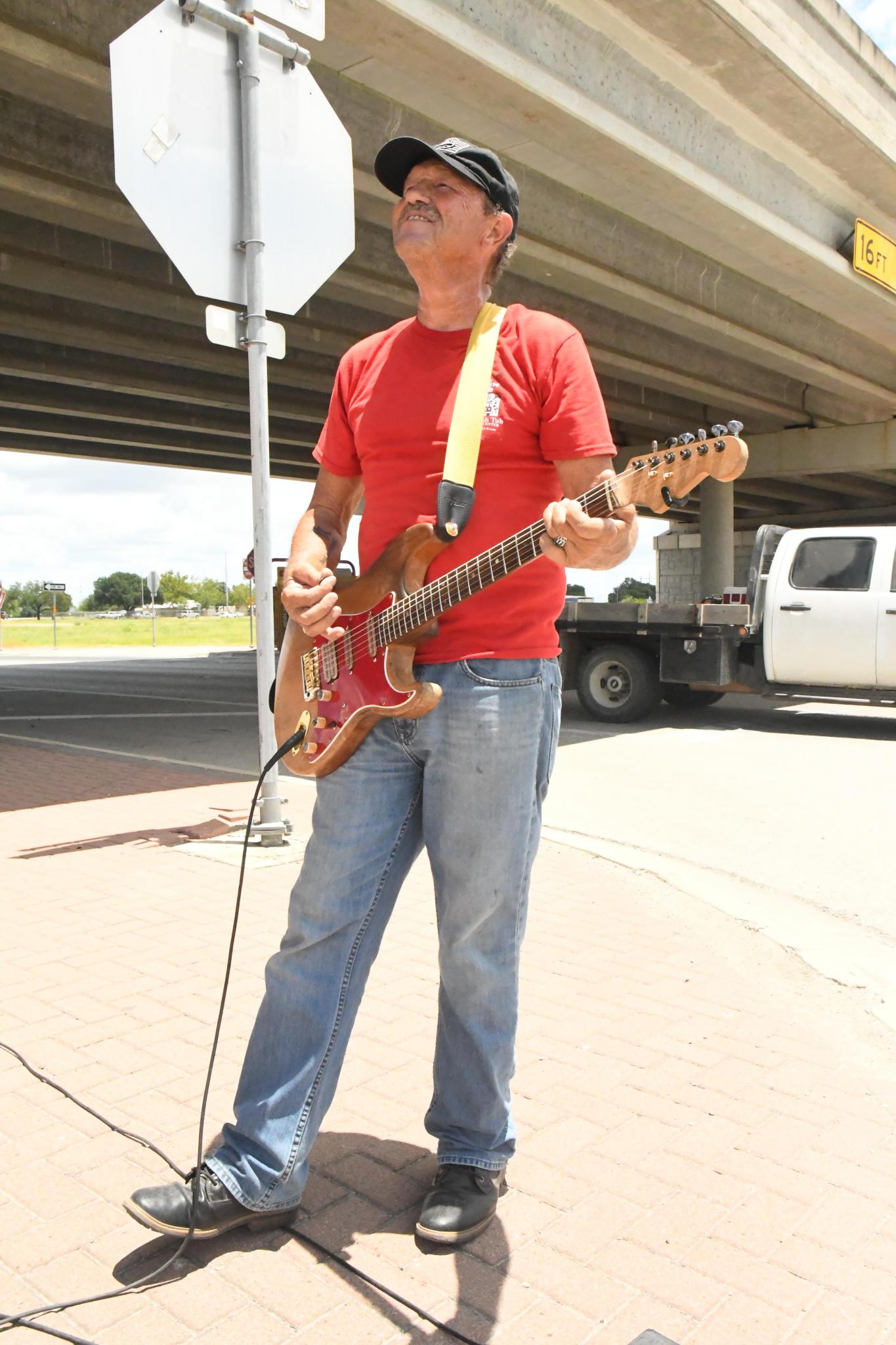 Local musician James Taylor plays his guitar at the corner of State Highways 21 and 80.Daily Record photo by Lance Winter

Harmonizing near the highway

Do what you love, and you’ll never work a day in your life.

It’s an expression 62-year-old James Taylor subscribes to when it comes to music. No, he's not the James Taylor that’s won five Grammy's. But there are similarities — besides the same moniker.

Granted, the venues in which they play are a little different. The Rock and Roll Hall of Famer can still pack in a crowd of loyal followers, while Hays County's rendition can be found busking, at the intersection of State Highways 80 and 21.

But that in no way diminishes one similarity the two clearly share and that’s their love of music.

Taylor said he always had a passion for the guitar, but that it was his father who had other plans for his son.

“My father said I’d never make money playing guitar not fully understanding how much I loved it,” Taylor said. “So, I went out to prove a point.”

In the late 70’s Taylor headed to New Orleans. It was there he said he both learned and saw a lot. But more importantly he perfected his craft and began busking, the activity of playing music on the streets, or other public places, for voluntary donations.

Taylor said he quickly made a friend, Frank Williams, and the two joined forces and performed in multiple locations.

“It was funny, people would laugh and say James Taylor and Hank Williams were performing for them. We quickly corrected them telling them no — the name was Frank Williams,” Taylor said.

Taylor's exploits took him from Florida to Oregon before finally settling in Austin seven years ago.

“I had three dollars in my pocket so playing guitar became a necessity,” he said.

A year later he settled in San Marcos where he got a job working in heavy equipment operations.

“When that played out, I picked back up the guitar and never quit,” Taylor said. “I used to play outside Taco Cabana, and later near Aarons, before coming here.”

Taylor said he was invited to the street corner where he currently performs by a panhandler acquaintance.

“I came out here one day and started playing the guitar and the folks driving by seemed to like it. They even encouraged me to never stop,” Taylor said. “That was more than three years ago. Oh, I’ve had to go to court a couple of times because of citations for panhandling, but as soon as I proved I was busking everything was fine, and things went back to normal.”

He said most people are very friendly and occasionally drop off a little money for his efforts, clothes – even food.

Asked if he was homeless Taylor firmly exclaimed, “No.”

“I’ve been homeless and don’t want to be that way again,” Taylor said. “It wasn’t due to drugs or alcohol. It was due to a lack of drive to work.”

He said he knows some assume he’s a drunk or has a drug problem but that the only medication he’s taking is for high blood pressure and for an ulcer.

“I also survived stage three liver cancer from a tattoo I received. It developed into Hepatitis C and damaged my liver,” Taylor said. “But I’m proud to say I’m living with it, and life is good.”

“I’m not an addict – I do this – play the guitar, out of love” he said. “I do it because God gave me a talent and it’s my responsibility to make that talent grow and share it.”

Listen in:  James Taylor plays Thursday – Sunday. Throw a smile his way when cruising to a stop at State Highways 80 and 21, and perhaps some spare change.