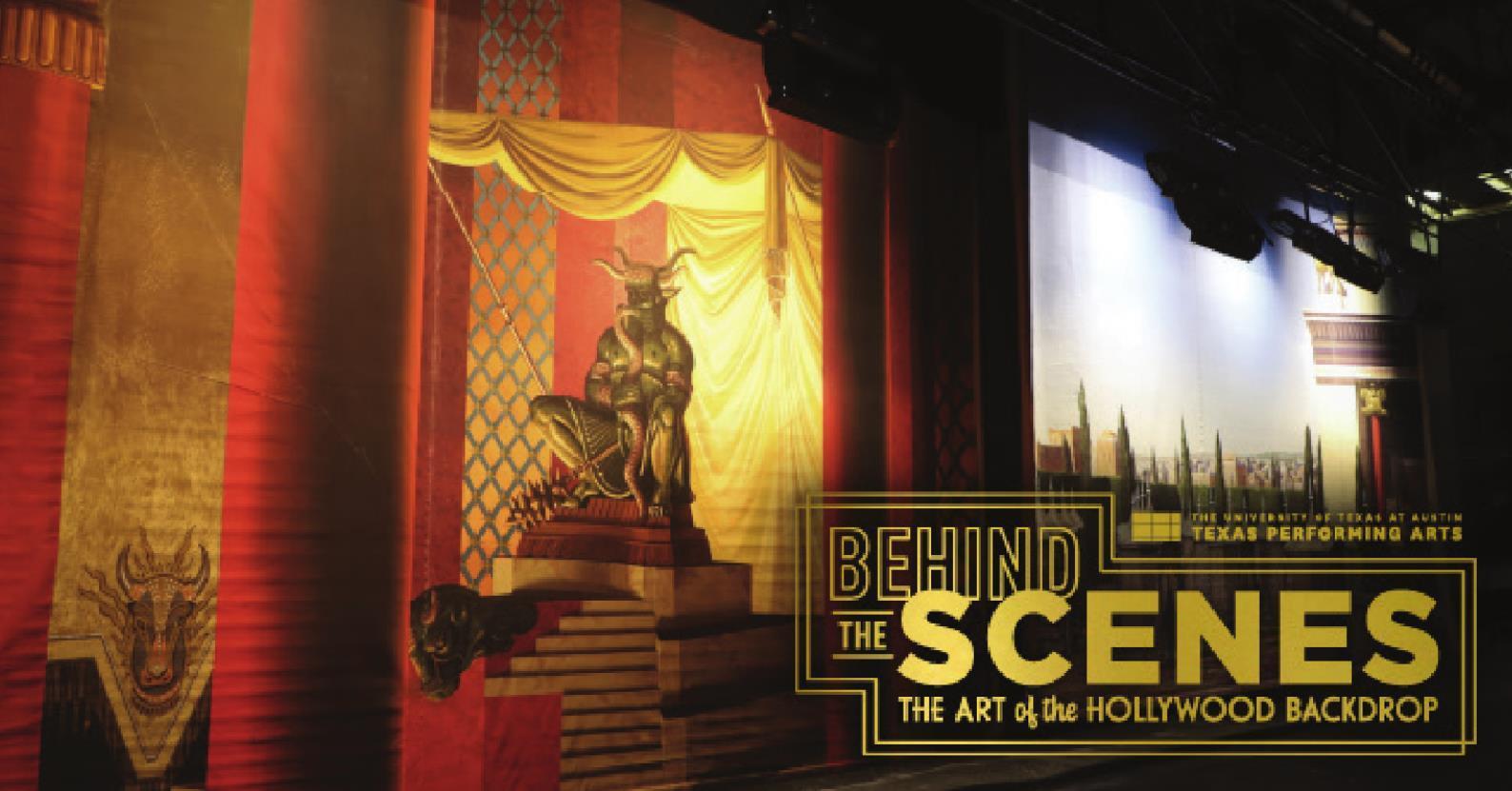 Imagine standing at the base of a painting that measures 93 feet in width and stands 40 feet tall. Then imagine feeling an odd sense of deja vu upon seeing this epic tapestry, realizing that it occupies a place rooted in Hollywood nostalgia.

With the latest exhibit at Bass Concert Hall, visitors will be able to see this first-ever public viewing of 12 historic Golden Age of film backdrops, which will provide an up-close look into the nearly lost art of hand-painted Hollywood motion picture scenic art.

From Feb. 11 - March 21, Texas Performing Arts has converted the vast Bass Concert Hall stage into a gallery space to showcase these works of art, allowing viewers to visit mid-century Hollywood without ever leaving Austin.

The exhibit is curated by Karen L. Maness, scenic art supervisor at TPA and faculty member in both the Theater & Dance and Arts & Entertainment Technologies departments at the University of Texas at Austin.

“Texas Performing Arts was able to receive these backdrops as part of a partnership with the Art Director’s Guild,” Maness explained. “I worked with the guild from 2012 to 2016 to chronicle the contributions of the backdrop scenic artists.”

In 2012, the Art Director’s Guild (ADG) Archives began the Backdrop Recovery Project, an effort to preserve the legacy of Hollywood’s motion picture scenic artists. This resulted in the preservation of 207 historic backings, creating the world’s most comprehensive archive of Hollywood scenic art history. ADG donated these historic drops to museums, motion picture archives and academic institutions, including The University of Texas at Austin through the Texas Performing Arts scenic studio. Texas Performing Arts now houses 50 MGM backdrops used to educate the next generation of scenic artists for stage and screen.

During that time frame, Maness learned that the historic Metro-Goldwyn-Mayer warehouse which housed these massive scenic backdrops was changing.

“My first question was, ‘what’s gonna happen to the backdrops?’ They have all of the holdings of MGM and 20th Century Fox, over 2,000 paintings,” Maness said. “They were working backdrops; they weren’t just in storage. So the long and short of this was, the backdrops were leaving the space, and we asked the candid question, ‘are you taking everything?’”

Maness explained that some of the paintings hadn’t been opened to the light of day in over 30 years. Acting with urgency, Maness and her department sent out a massive call for help to get these one-of-a-kind paintings opened, photographed and housed.

“They were too important to history,” Maness explained. “Sony Studios offered a soundstage for 10 days. The guild managed to bring in their people, and they photographed them as a whole.”

Maness felt this was vital to preserving the large-scale scope of the backdrops, but as a painting professor, she also wanted to capture the intricate details of the process up close for the sake of teaching this nearly lost art to future generations.

“This kind of painting knowledge has been supplanted by digital technology,” Maness said. “This place was responsible for creating and holding space for some of the most extraordinary paintings in cinematic history, from Wizard of Oz to the Hateful Eight of Tarantino, King Kong and Independence Day. My set position is of connecting people and art-making.”

As the chronicling part of the project continued, Maness saw the opportunity to further the preservation efforts as a way of celebrating these scenic artists, most of whom have never been credited for their work.

“UT-Austin now owns the largest educational collection of Hollywood Motion Picture backdrops in the world.” Maness explained. “Created in the guarded secrecy of MGM's studio system and designed to transport audiences to far off locations while filming on soundstages in Culver City, these backdrops have never been accessible for public viewing. Discover the ‘Below the Line’ artists who shaped cinematic history. These are the masterworks of artists who painted for films like The Wizard of Oz, An American in Paris, Singin' in The Rain, and North by Northwest. You’ll be astonished by these monumental illusions.”

Maness was particularly excited to share the scale and magnitude of these works of art.

“They’re massive,” she said. “That’s the really fun part of this. People get to walk behind the stage of Bass, but you also get to stand among paintings that were part of the illusion of telling the story of a film.”

Maness also explained that, unlike with other art exhibits, being up close and taking photos is encouraged. “That part is important because the backdrop was made to hold a story,” she said. “The human aspect to the painting makes the design more effective.”

Maness now stands at the threshold of a new evolution in scenic background painting, passing the paintbrush of Hollywood’s Golden Age to students who will marry those traditional techniques with the technological advances of CGI.

“Old Hollywood techniques do still exist,” Maness said. “It has been woven in and out of films. We’ve entered into the next evolution with the Mandalorian. They’re still shooting in camera, and baby Yoda is an example of that need to have the handmade magic that’s possible at the intersection of these technologies. J. J. Abrams realized they wanted walk-about characters. Not Jar Jar Binks. Now we’re choosing when to use digital effects to best tell the story, and which things work better when they’re made by hand. Even the Mandalorian’s costume is painted. That fauxfinishing is still relevant to our students.”

While large-scale indoor performances remain suspended due to the pandemic, the Bass Concert Hall stage has been transformed into an exhibition hall, offering viewers a unique opportunity to see these enormous historic paintings up close.

The exhibit also includes recreations of other backdrops in the collection that were painted by UT Austin scenic art students training with Professor Maness in the Texas Performing Arts studios. “These MGM backdrops hold the key to every discipline required to succeed in the art of scenic painting,” Maness said.

The exhibit is open by reservation for one-hour long visits on Thursdays through Sundays from Feb. 11 to March 21, 2021, as well as on President’s Day, February 15, 2021. Timed slots are available at 2:30 p.m. and 4 p.m. on Thursdays and Fridays and at 10 a.m., 11:30 a.m., 2 p.m., and 3:30 p.m. on weekends and President’s Day. The number of visitors per onehour timed entry slot is strictly limited. Advanced reservations are required and may be made at texasperformingarts.org.

Tickets are $12 for adults and $5 for non-University of Texas at Austin students of any age. Tickets are free for UT students, faculty and staff, healthcare professionals, essential workers, and military. Social distancing protocols will be observed and masks are required.