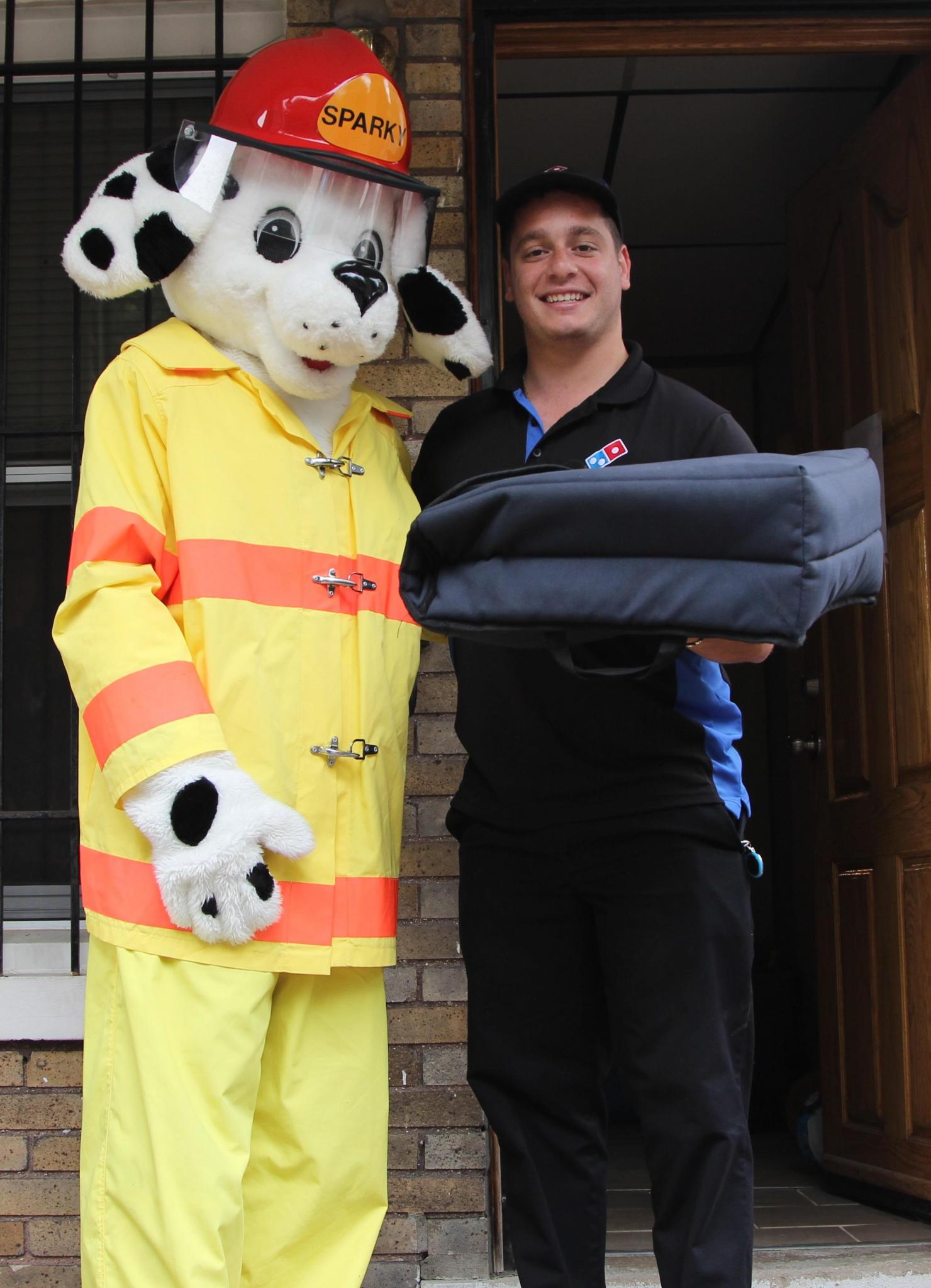 San Marcos Domino's and the National Fire Protection Association are teaming up with the San Marcos Fire Department for Fire Prevention Week. A Domino's team member with Sparky the Fire Dog.

San Marcos Domino’s, located at 1290 Wonder World Drive, and the National Fire Protection Association (NFPA) are teaming up with San Marcos Fire Department to promote fire safety during Fire Prevention Week (Oct. 6-12). On Oct. 10 from 3-5 p.m., anyone who orders a Domino’s pizza may be randomly selected and surprised at the door when their pizza arrives aboard a fire engine. If the smoke alarms in the home are working, the pizza is free. If the smoke alarms are not working, the firefighters will install fully-functioning alarms or replace the batteries.

“Fire safety is extremely important,” said Alan Murph, San Marcos Domino’s franchise owner. “We’re excited to partner with the NFPA and San Marcos Fire Department for a program that not only promotes the safety of our friends and neighbors, but rewards those who make fire safety a priority.”

This year’s Fire Prevention Week campaign theme is “Not Every Hero Wears a Cape. Plan and Practice Your Escape!”

“In a typical home fire, you may have as little as one to two minutes to escape safely from the time the smoke alarm sounds,” San Marcos Fire Chief Les Stephens said. “Escape planning and practice can help you make the most of the time you have, giving everyone enough time to get out. These steps can make all of the difference and we hope to raise awareness about them through our partnership with Domino’s.” 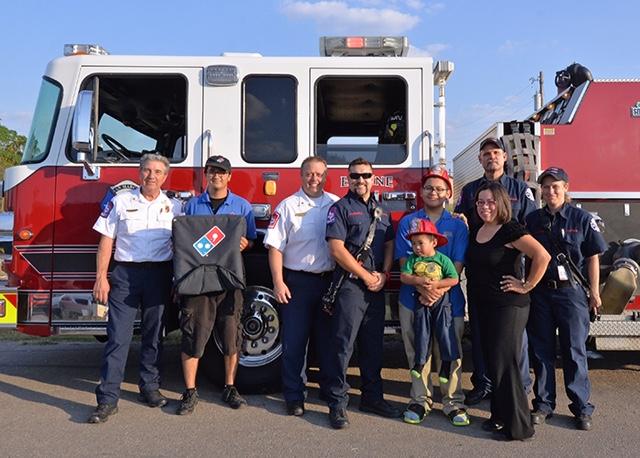 Above, a photo from the 2018 National Fire Prevention Week in San Marcos. Submitted photos

Customers can call Domino’s in San Marcos at 512-392-7272 to place their order and be eligible for the fire engine delivery.

Founded in 1896, NFPA is a global, nonprofit organization devoted to eliminating death, injury, property and economic loss due to fire, electrical and related hazards. The association delivers information and knowledge through more than 300 consensus codes and standards, research, training, education, outreach and advocacy; and by partnering with others who share an interest in furthering the NFPA mission. For more information, visit www.nfpa.org. All NFPA codes and standards can be viewed online for free at www.nfpa.org/freeaccess.

NFPA has been the official sponsor of Fire Prevention Week since 1922. According to the National Archives and Records Administration's Library Information Center, Fire Prevention Week is the longest running public health and safety observance on record. The President of the United States has signed a proclamation proclaiming a national observance during that week every year since 1925. Visit www.firepreventionweek.org for more safety information.

Founded in 1960, Domino’s Pizza is the largest pizza company in the world based on retail sales, with a significant business in both delivery and carryout pizza. It ranks among the world’s top public restaurant brands with a global enterprise of more than 16,300 stores in over 85 markets. Domino’s had global retail sales of over $13.5 billion in 2018, with nearly $6.6 billion in the U.S. and more than $6.9 billion internationally. In the second quarter of 2019, Domino’s had global retail sales of over $3.2 billion, with over $1.6 billion in the U.S. and over $1.6 billion internationally. Its system is comprised of independent franchise owners who accounted for 98% of Domino's stores as of the second quarter of 2019. Emphasis on technology innovation helped Domino’s achieve more than half of all global retail sales in 2018 from digital channels. In the U.S., Domino’s generates over 65% of sales via digital channels and has developed several innovative ordering platforms, including Google Home, Facebook Messenger, Apple Watch, Amazon Echo and Twitter – as well as Domino’s Hotspots®, an ordering platform featuring over 200,000 unique, non-traditional delivery locations. In late 2017, Domino’s began an industry-first test of self-driving vehicle delivery, and in June 2019 announced a partnership with Nuro, furthering its exploration and testing of autonomous pizza delivery.