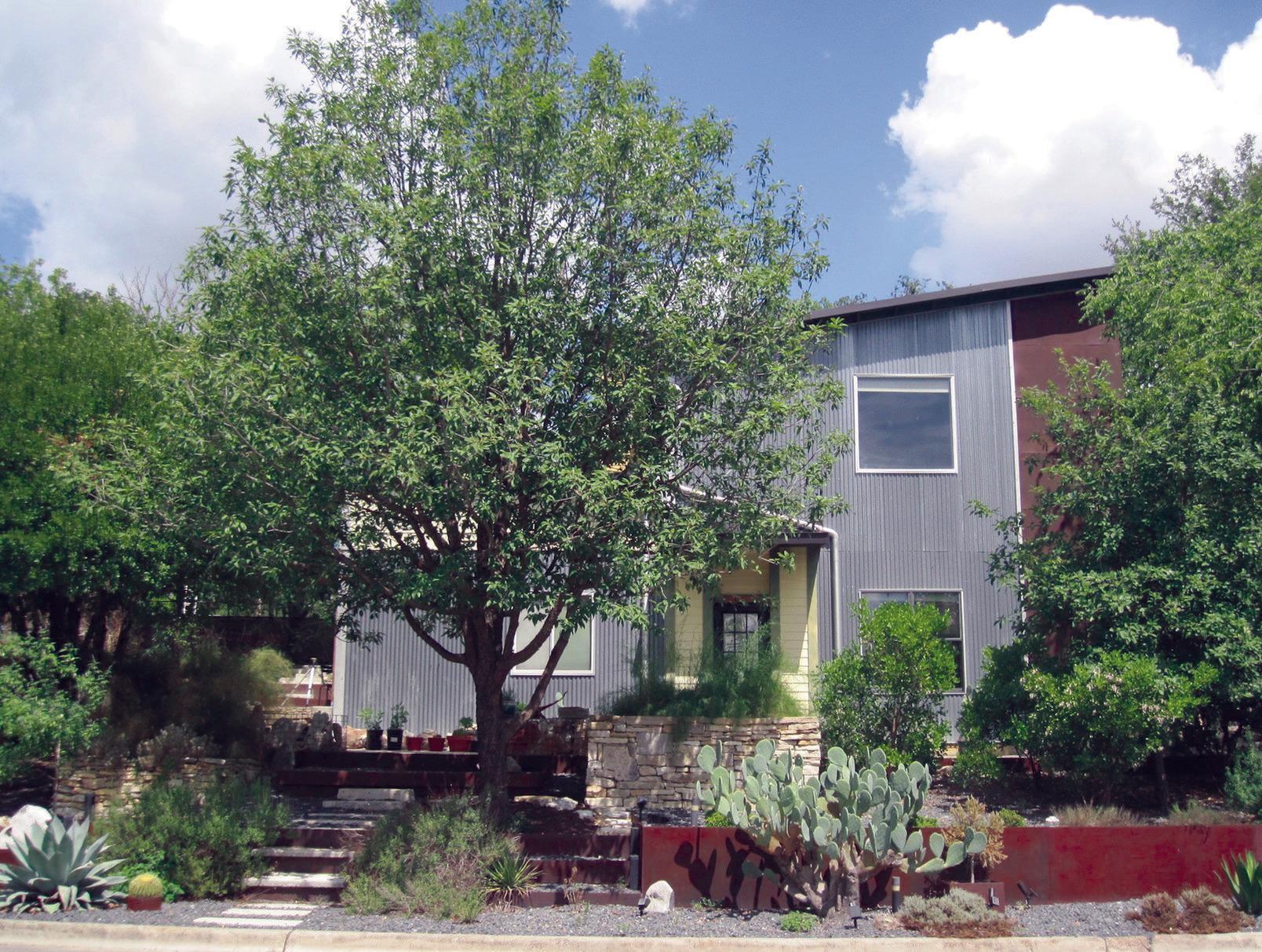 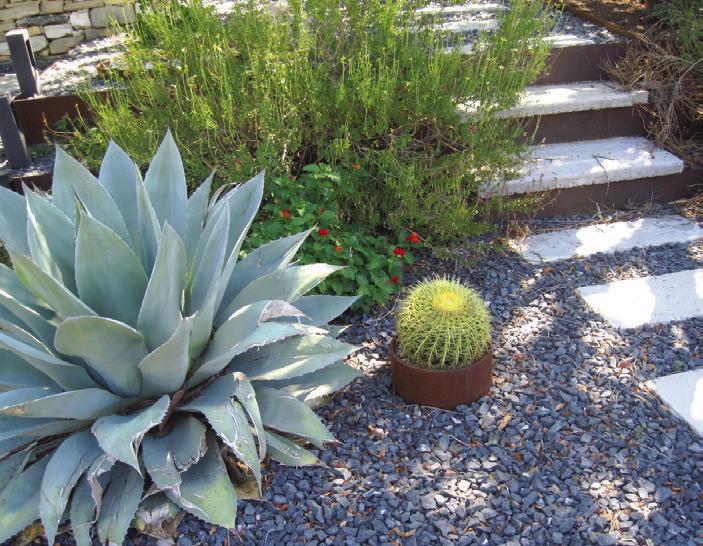 Agave dwarfs barrel cactus by front steps with lantana and sage in background. 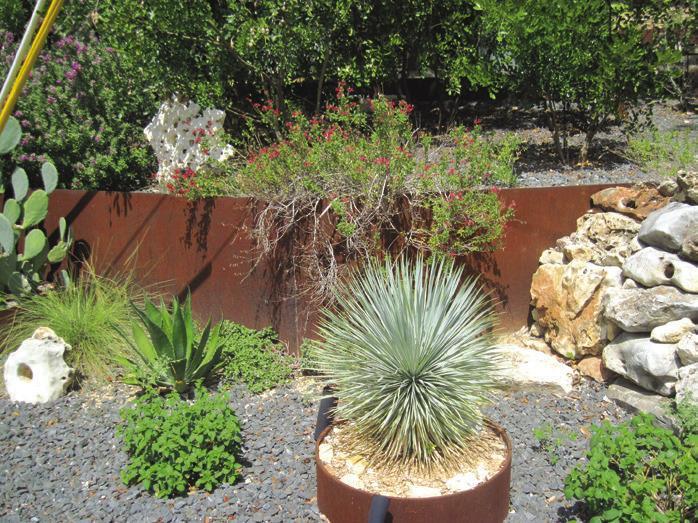 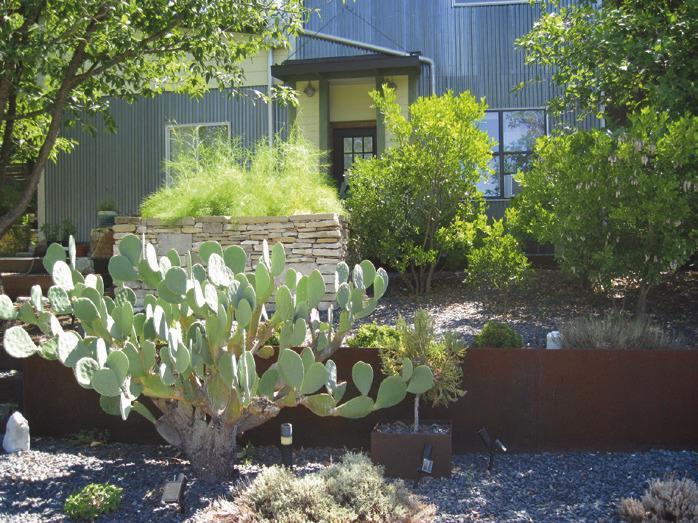 Descended from one gifted cactus pad, a spineless cactus curbside offers another shade of green compared with bamboo muhly and mountain laurel. 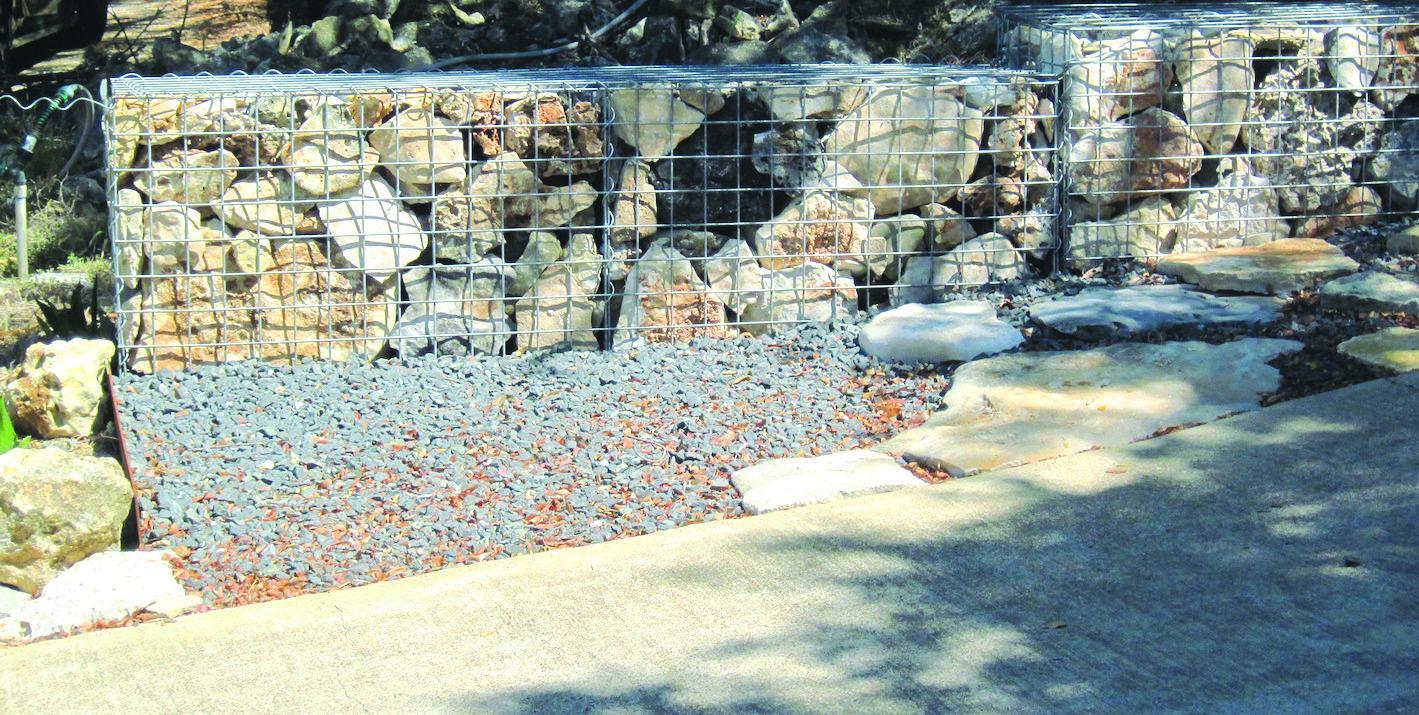 Yard of the Month

Spring Lake Garden Club’s September Yyard of the Month is in the Forest Hills neighborhood, between North LBJ Drive and Spring Lake Hills, north of Texas State campus. The home of Jeff Dell for 17 years, this hillside landscape on West Bluebonnet Drive near the intersection of Mandalay Lane is a dramatic terraced showcase of native plants. Jeff, a professor of printmaking at Texas State, noted the yard is “100% my responsibility” but that it needed supplemental watering for two hot months this summer while Dell practiced art and teaching in Sicily. Thanks to recent rains, the landscape is now a living collage of greenery on a hillside easel.

Any hillside landscape involves control of soil and water on a slope, and Dell discovered a new affinity for “walling” or building rock walls, which turns out to be a worldwide community of builders. He built the impressive rock “planter” in the front yard, but is now also an advocate of using “gabions” or wire containers for smaller rocks to stabilize a slope. Dell crafted his own wire cages at first, but found that kits from Australia were more efficient for using rocks from the property. Dell hired a steelwork contractor in 2015-2016 to install metal retaining panels that define major front yard terraces. Since then, other metal retainers and plant rings have been added after visits to a used steel outlet in New Braunfels.

One of the first plantings in the front yard was a Mexican oak sapling, provided by Dell’s father, and a second one added later is almost as tall as the original. Both shade the west-facing front yard from afternoon sun. Other sun-tolerant plants add to the variety of the uphill landscape, with lime green fronds of bamboo muhly in the rock planter contrasting with dark green leaves of nearby mountain laurel. one of Dell’s favorite central Texas plants. Dell is an adopted rather than native-born Texan, but has already learned that patience is necessary for gardening here. Only six of 70 mountain laurel seeds he collected actually germinated, but the new plants are already adding to the landscape. Others are nurtured in pots near the entrance, along with agave pups and other cuttings, as future gifts to friends and neighbors.

Recycling and reuse — plus pass-along plants — are key factors in Dell’s continuing landscape project. Front steps from the street are concrete rectangles salvaged from cutting up a demolished slab at the outlet center in San Marcos. Set in gray gravel over a weed barrier, the steps offer visitors an easy climb toward the entry. A handsome cactus “shrub” near the curb is descended from one of two cactus pads from a friend in Wimberley, and a pillar cactus near the driveway is also gift from a friend. An olive tree lost in the Februar 2021 freeze has been replaced with a hardy vitex, and Dell hopes that a huisache tree at the opposite side of the yard will thrive, a reminder of the similar acacias he admired in Italy. Plants filling in the curbside bed on Bluebonnet Drive include more natives — cenizo or Texas Sage with its purple flowers, Mexican bush sage, salvia, lantana and santolina — all growing in a mulch of gray gravel. Thick mulch of any kind reduces water evaporation from the soil, so plants such as yucca, salvia and agave require almost no watering between rains. With a sustainably-terraced front slope and hardy plants, Dell now turns to landscaping a side yard patio with more shade — still another gardening challenge.