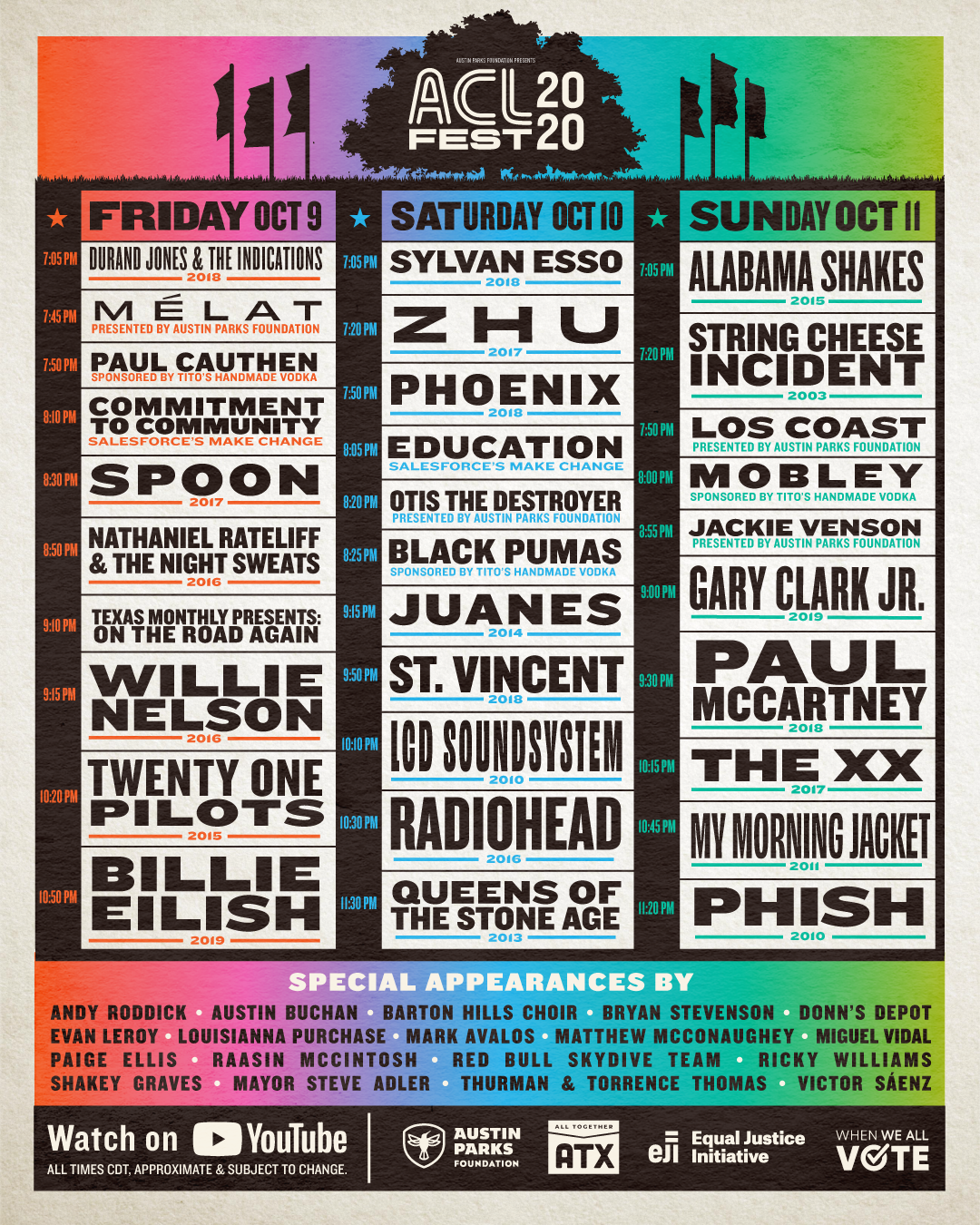 Austin – Austin City Limits Music Festival has revealed the lineup and schedule for ACL Fest 2020, a free three-night broadcast event taking place October 9-11 beginning at 7 p.m. each night, exclusively live on YouTube. In celebration of the iconic annual two-weekend festival, ACL Fest fans will relive memorable past sets captured in Zilker Park and unique original programming and contributions from the entire Austin City Limits family.  ACL Fest 2020 is proud to partner and raise awareness for Austin Parks Foundation, All Together ATX, Equal Justice Initiative, and When We All Vote. Tune in at ACLFestival.com and YouTube.com/ACLFestival.

Each year, as the summer comes to a close and fall begins, a sense of excitement takes over Austin as the ACL Fest weekends approach.  Generations of music fans who have been raised on the annual weekend tradition of gathering in Zilker Park prepare to soak up diverse musical sounds as a united community.  Memories are made, and stories that will be told for a lifetime unfold.  ACL Fest 2020 will provide fans a connection to their greatest memories of ACL’s past, where they were and who they were with, and the sensation of experiencing live music outdoors with thousands of people who share a common sense of pride in community and love of music.

Since 2006, Austin City Limits Music Festival has proudly partnered with Austin Parks Foundation, providing more than $41 million to improve parks, trails and green spaces all over Austin, including recently completed projects at Georgian Acres and Brentwood Neighborhood Park, as well as a long-term investment in the Eastlink Trail. As part of ACL Fest 2020, Austin Parks Foundation will showcase Austin-based artists filmed in unique park locations across the city, including Mélat from the Zilker Botanical Gardens, Jackie Venson from Pan Am Neighborhood Park, Los Coast from the Zilker Clubhouse and Otis the Destroyer performing at Heath Eiland and Morgan Moss BMX Skatepark.

In addition, the entire ACL family will provide entertainment during ACL Fest 2020, including classic tapings from Austin City Limits TV, a behind-the-scenes tour of ACL Live, and backstage artist interviews from ACL Radio.

Salesforce is proud to support ACL Fest 2020 with its Make Change initiative hosted by Matthew McConaughey, featuring two sessions. The first session, “Commitment to Community,” will be a conversation with tennis legend Andy Roddick, Olympic athlete Raasin McIntosh, and local entrepreneurs, Thurman and Torrence Thomas. McIntosh will talk about her non-profit organization Raasin in the Sun, which serves the community through urban beautification. There will also be a discussion with the Thomas brothers, who founded Tankproof, an organization focused on giving local youth the gift of swimming. The second session, “Education,” will be moderated by Victor B. Sáenz, Ph.D., Chair of the Department of Educational Leadership and Policy at the University of Texas at Austin and feature a conversation about College Forward, an organization assisting underserved high school students in reaching their college dreams. This series inspires others to join the conversation, shift their perspective, and understand how their approach can make change in the world.

The weekend broadcast will also premiere Texas Monthly’s animated video of Willie Nelson’s 2016 Austin City Limits Music Festival performance of  “On the Road Again,” animated by Arts + Labor. The magazine will debut its new Willie Nelson podcast, “One by Willie,” on October 9, and will be publishing its recent special issue dedicated to the life and career of the legendary singer songwriter online that same day.

ACL Fest 2020 is pleased to bring awareness to and partner with Michelle Obama’s When We All Vote, a non-profit, nonpartisan organization launched by Co-Chair Michelle Obama in 2018 to increase participation in every election, with a mission to change the culture around voting and close the race and age voting gap to ensure every eligible voter is registered and ready to vote, the Equal Justice Initiative, which is committed to ending mass incarceration and excessive punishment in the U.S., challenging racial and economic injustice, and protecting basic human rights for the most vulnerable, and All Together ATX Relief Fund, a community-led philanthropic fund created by partners Austin Community Foundation and United Way for Greater Austin to provide flexible resources to nonprofit organizations working with community who are disproportionately impacted by COVID-19 and the economic consequences of the outbreak.  In addition, ACL Fest is proud to broadcast the full-length video of “Walk With Me,” a new song produced by 45 native and resident musicians from Austin, Texas.  Benefitting HAAM, the song brings hope to the community while addressing matters of social and racial injustice, civil unrest, equality and the global coronavirus pandemic.  Fans can learn more about each of these organizations and donate to support their efforts during the broadcast at www.aclfestival.com/donate.

ACL Fest 2020 merchandise is available now and includes a brand-new selection of graphic tees, a mask, blanket, and more. The collection includes a custom hoodie that will raise money for the Austin Parks Foundation, plus a limited-edition collaboration with Austin-based Zilker Belts featuring a custom belt and dog collar. To view the full collection and to purchase, visit the ACL Festival online store.