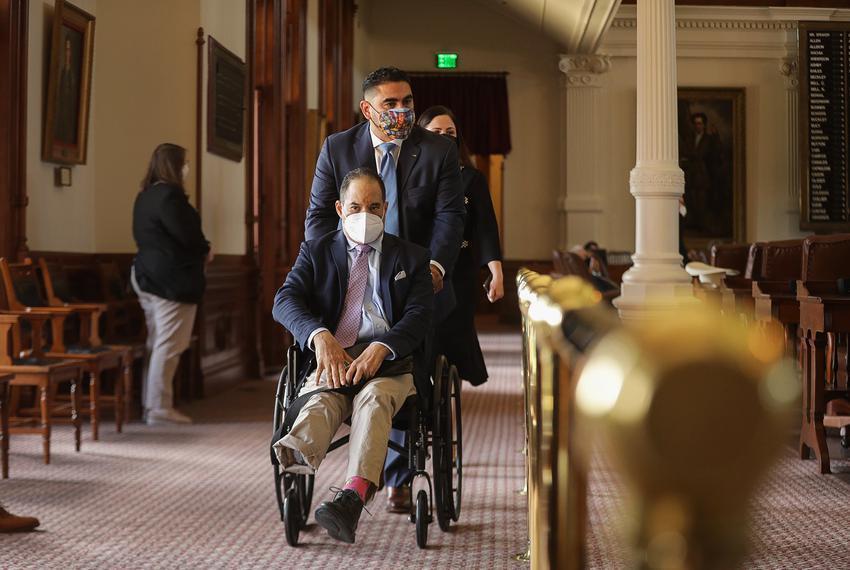 For the first time in nearly six weeks, enough lawmakers were present in the Texas House on Thursday for the chamber to conduct business — opening the door for the passage of the GOP priority elections bill that prompted Democrats to flee the state in July in an effort to shut down the legislation.

The GOP elections bill would, among other things, outlaw local voting options intended to expand voting access and bolster access for partisan poll watchers. Democrats and voting rights advocates say it restricts voting rights in the state. Republicans, who control both chambers of the Legislature, say the proposal is intended to secure “election integrity.”

Democrats first orchestrated a plan in May to kill the voting legislation when they walked out of the House chamber in the final hours of the regular legislative session, preventing final passage before the clock ran out.

Abbott responded by calling a 30-day special session that began in July. That led to more than 50 Democrats leaving Texas to camp out in Washington, D.C. — away from the reach of Texas law enforcement officials — for several weeks.

The Democrats successfully blocked the bill’s passage during that session, which ended Aug. 6. But Abbott, who made the elections bill and a bail reform bill priorities this year, immediately called another 30-day session to push the bills forward. Abbott has said he won’t stop calling lawmakers back into session until the elections bill is passed.

The second special session began Aug. 7 without a quorum in the House, with most Democrats initially committing to staying away from the state Capitol — even as House leadership deployed law enforcement to conduct civil arrests and return them to the chamber.

Although the House reached the minimum number of lawmakers to conduct official business Thursday, it’s unclear whether the chamber will be able to maintain those numbers for the duration of the second special session, which ends Sept. 5.

On Wednesday night, Houston Democrat Garnet Coleman told The Dallas Morning News that he would be returning to the chamber, bringing the House one lawmaker closer to the 100 lawmakers it needed to conduct business. When San Antonio Democrat Leo Pacheco’s resignation went into effect Thursday, the quorum requirement dropped to 99 lawmakers. (Pacheco is reportedly resigning to teach public administration at San Antonio College).

In a joint statement, the three Democrats said they were “proud of the heroic work and commitment” their caucus had shown in breaking quorum.

“We took the fight for voting rights to Washington, D.C. and brought national attention to the partisan push in our state to weaken ballot access. Our efforts were successful and served as the primary catalyst to push Congress to take action on federal voter protection legislation,” the statement read. “Now, we continue the fight on the House Floor.”

The lawmakers pointed to the surge in COVID-19 cases in the state, an overwhelmed hospital system and the return of children to school as efforts that the Legislature needed to work on.

“It is time to move past these partisan legislative calls, and to come together to help our state mitigate the effects of the current COVID-19 surge by allowing public health officials to do their jobs, provide critical resources for school districts to conduct virtual learning when necessary, while also ensuring schools are a safe place for in-person instruction, and will not become a series of daily super-spreader events,” the statement said.

Lawmakers will also have to repair relationships that were fractured during the quorum break.

Alexa Ura contributed to this report.

Disclosure: San Antonio College has been a financial supporter of The Texas Tribune, a nonprofit, nonpartisan news organization that is funded in part by donations from members, foundations and corporate sponsors. Financial supporters play no role in the Tribune's journalism. Find a complete list of them here.

This article originally appeared in The Texas Tribune at https://www.texastribune.org/2021/08/18/texas-house-democrats-quorum/.