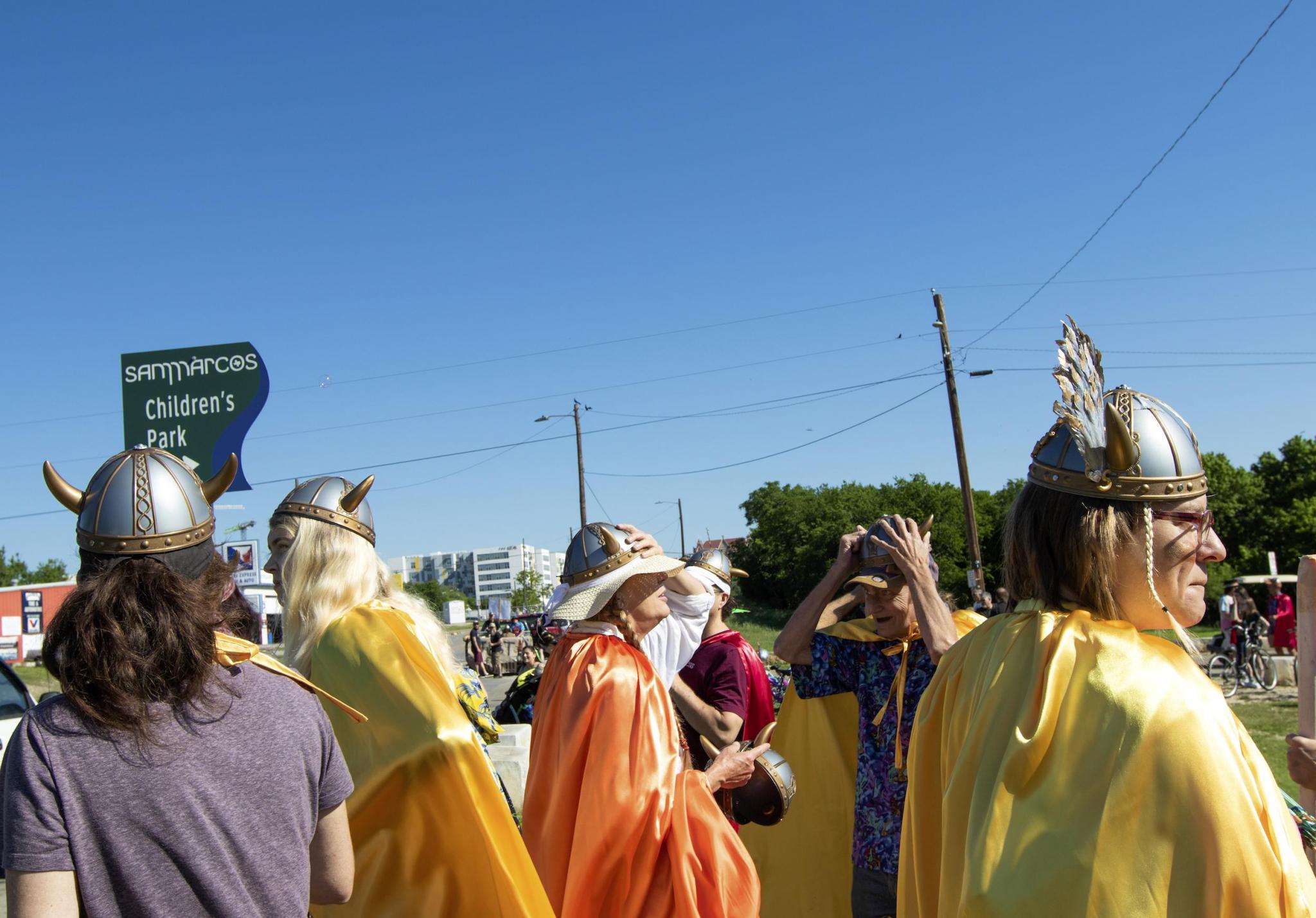 The Just For Fun parade took place downtown on Saturday morning, beginning at the Children’s Park. In this year’s annual Just For Fun parade, a number of participants sport Viking helmets and capes in tribute to ‘Viking Goddess’ Susie Mullen. The Just For Fun Parade celebrated its 42nd year of good-natured fun and whimsy with cyclists, hula-hoopers, floats, two local bands and a goat named Hank as part of the parade through downtown San Marcos. Daily Record photos by Denise Cathey

There were Viking helmets and Hawaiian shirts galore at the Just For Fun Parade on Saturday as locals paid tribute to two longtime parade participants who recently passed away.

The Viking helmets – which some people wore on top of other hats – were to honor Susie Mullen, also known as Ms. Susie or Susie the Viking Goddess because of her long braids. Mullen, a San Marcos native known for her warm heart and her love of feeding people, was a fixture in the Just For Fun Parade who passed away earlier this year. Many participants in this year’s parade also wore “Viking Goddess” T-shirts, made and sold by Rival3 Sports with all proceeds going to the Hays County Food Bank, one of Mullen’s favorite causes. 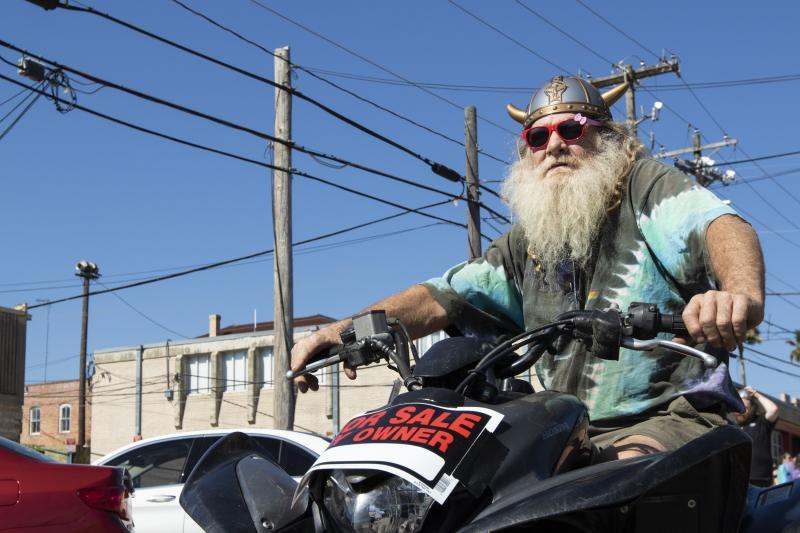 Sporting a Viking Helmet of his own, Mark Andrews rides down Hutchison Street on an ATV in the parade.

The Hawaiian shirts many people wore in this year’s parade were to honor Archer “Buddy” Lerch, a well-known figure in San Marcos who was also a regular in the Just For Fun Parade. Lerch passed away earlier this month.

As usual, the parade included bicyclists, motorcyclists, plenty of costumed pedestrians and music by the Callous Daoboys, along with children, pets, music by the Spacecorps and a fake protest of the parade that prompted some good-natured jeers. 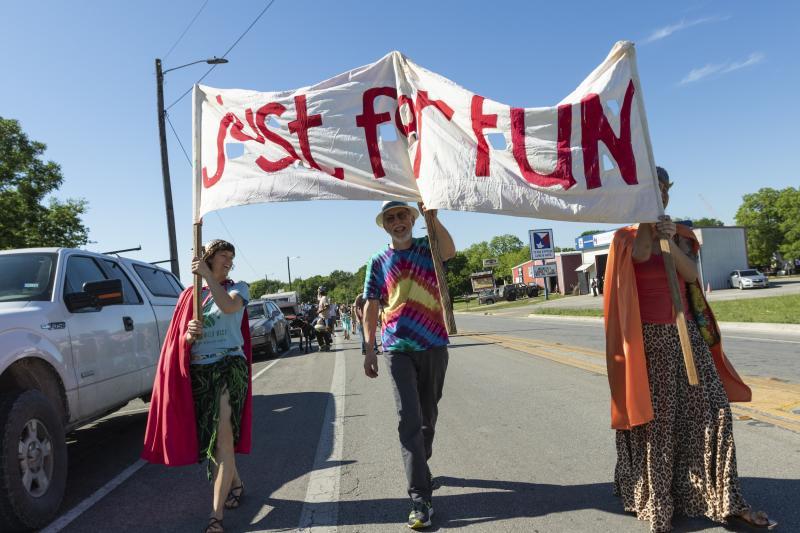 Kaycee Baker, Tracy Weinberg and Heather Hopkins carry the traditional banner at the head of the parade as they make their way up CM Allen Parkway.

Jerri Zapata and Aaron Mata were camped out to watch the parade under the shade of a tree on Hopkins Street. It was Zapata’s first Just For Fun experience.

“I thought it was very cute,” she said. “All the people dressed in their cute costumes with their families and pets … they looked like they were having a lot of fun.”

“I wish it were longer,” Mata said. 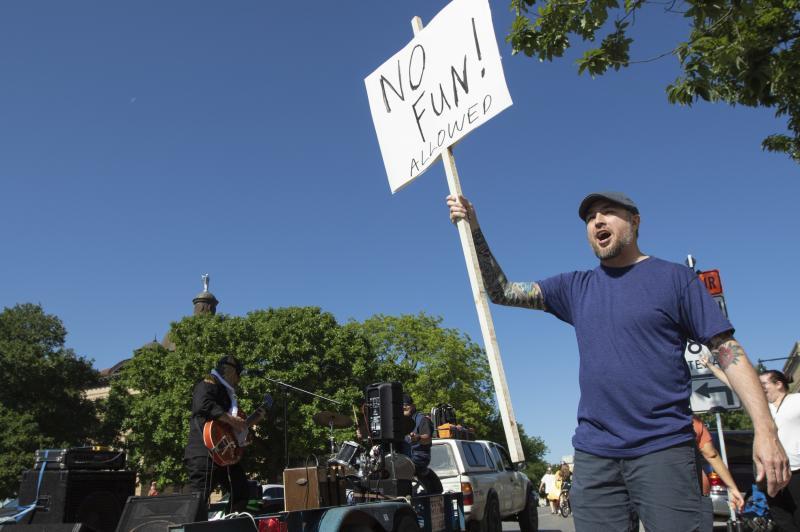 On the square, Jody Wood pretends to protest the parade, chanting “No more fun” at parade attendees.

Zapata agreed, saying she hopes that more people find out about the parade and the details next year for a bigger crowd and a bigger parade.

Just For Fun, a celebration emphasizing whimsy and community, takes place the fourth Saturday in April every year.