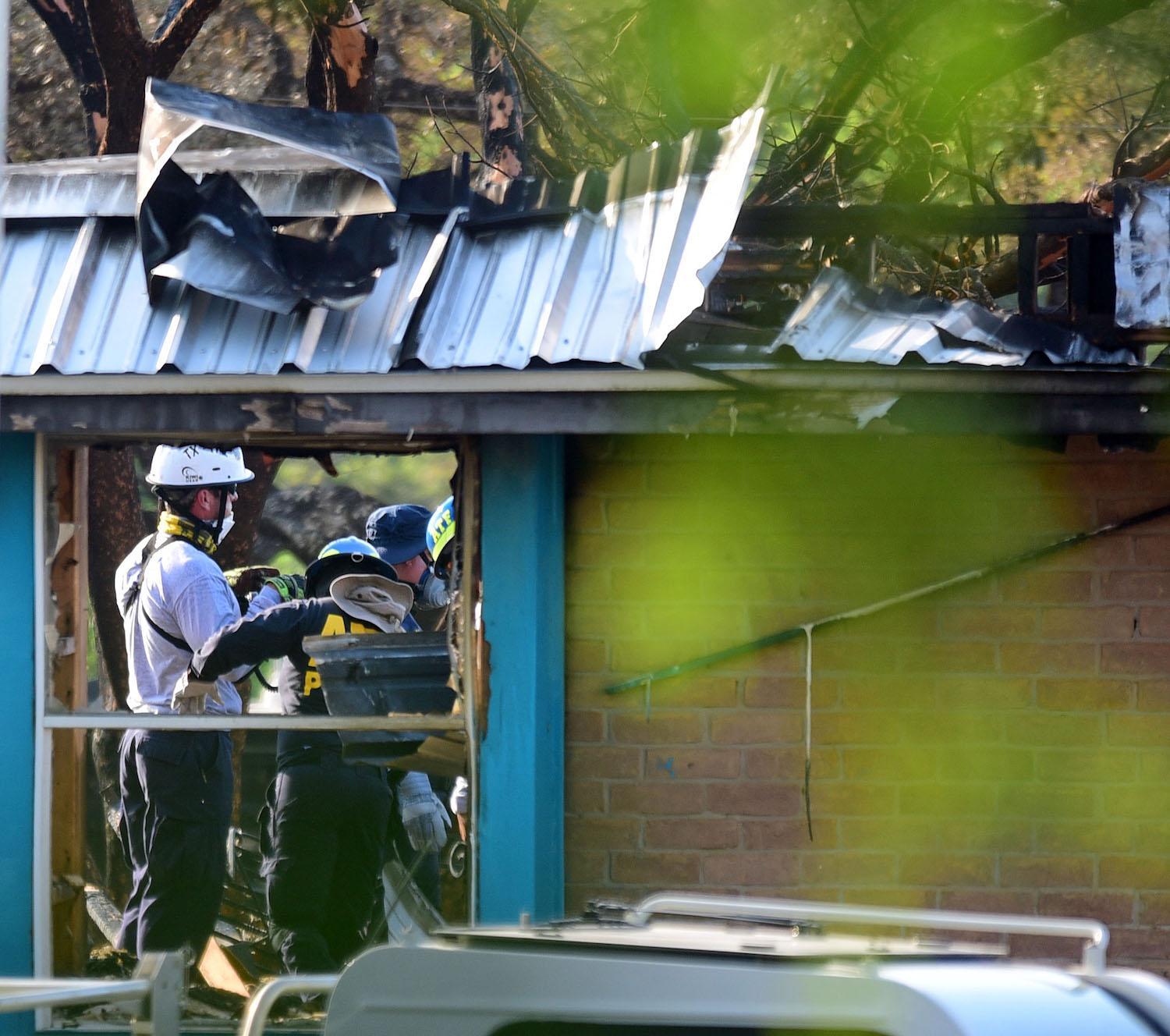 ‘We don’t know how many’

Search and recovery operations at the apartment buildings affected by Friday’s inferno will continue until officials are certain that every resident and potential victim is accounted for, investigators said at a press conference Monday morning.

San Marcos Fire Marshal Kelly Kistner said that at the time of the press conference, four bodies had been found in Building 500 of the Iconic Village apartment complex. Officials said the bodies had not been identified.

“As of this morning, search and recovery efforts continue on the scene,” he said.

San Marcos firefighters also cleared Building L of Vintage Pads and on Monday would turn their efforts to Building 300 in Iconic Village.

“Search operations will continue until we know all potential victims have been recovered,” he said. 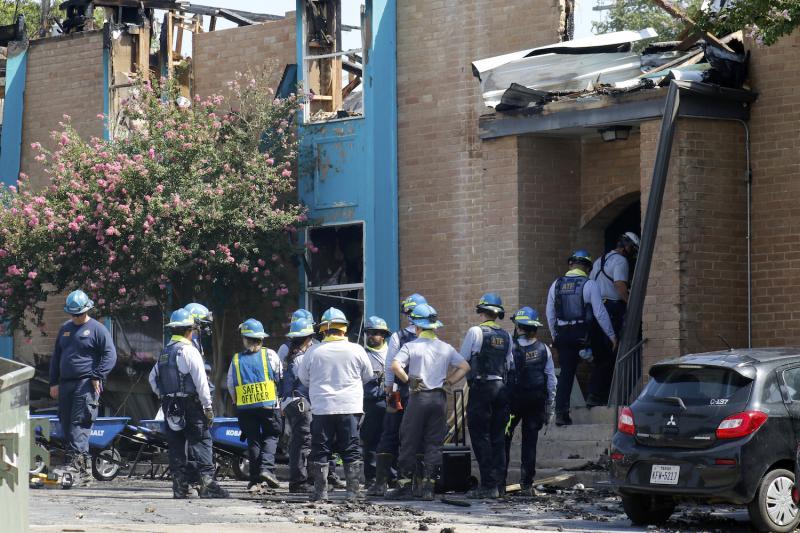 The bodies of four victims have been recovered, while some 200 people have been displaced and at least one is still missing. Daily Record photo by Denise Cathey

Mike Weddel, Bureau of Alcohol, Tobacco and Firearms agent in charge for the investigation, said the property management company helped investigators track down leasing information for the apartments and some information on which tenants were likely out of town when the fire occurred. However, Weddel said, some residents might have sublet their rooms or apartments, and some might have had guests staying over the night of the fire. That complicates investigators’ efforts to find out how many people might still be unaccounted for beyond the five people officials knew about on Friday.

“We are concerned that there may be more,” he said. “We don’t know how many.”

Speaking at the press conference Monday, San Marcos Mayor John Thomaides said the community is “deeply saddened and shaken” by the fire, which broke out just before 4:30 a.m. Friday and left approximately 200 people displaced, six injured and five unaccounted for.

“As a community, our hearts are broken,” Thomaides said. “We’ve lost so much.” 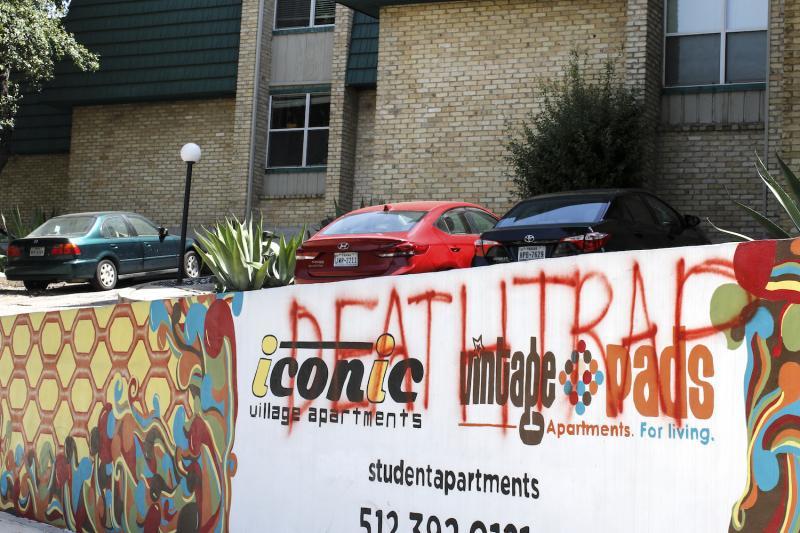 The mayor asked the community to pray for the friends, families, classmates and teachers of the victims of the fire. He also said that some of the families will need assistance in making final arrangements for their loved ones and asked anyone in the community who can help to contact SMFD Chief Les Stephens or Kistner.

Thomaides also announced the opening of a resource center for those displaced by the fire. Residents affected by the fire can go to the San Marcos Activity Center on Tuesday and Wednesday between 10 a.m. and 7 p.m. to meet with representatives from numerous city departments and other agencies.

“We want to focus on their needs,” Thomaides said of the displaced apartment residents. 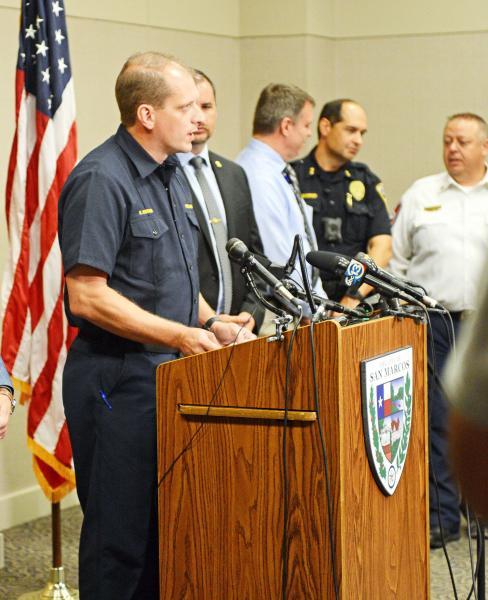 Rachel Ingle, the city’s emergency operations chief, said the Red Cross, Austin Disaster Relief Network, Blanco River Regional Recovery Team (BR3T) and the Texas State University’s office for student emergency services will be set up at the resource center. The Department of Public Safety will also be on hand with its mobile drivers license replacement unit, and numerous city departments, including the animal shelter, will be on hand to assist residents.

Texas State University Provost Gene Bourgeois shared information about services the university is offering to students affected by the fire. Students in need of emergency funds or emergency services can contact the Dean of Students Office for assistance. The university is also offering housing referrals and counseling services. 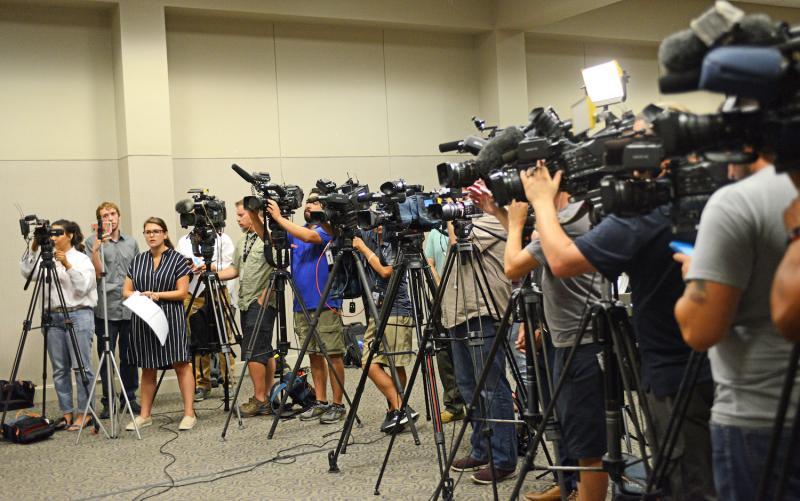 Broadcast media from Austin and beyond crowded into the Monday morning press conference. Daily Record photo by Gerald Castillo

City Manager Bert Lumbreras expressed pride in the city’s response to the tragedy -- from the first responders and city staff to neighbors in the affected apartment buildings and local businesses, organizations and individuals who have reached out to help. He named Central Texas Medical Center, Westover Baptist Church, the Lions Club, the County Emergency Response Team, Austin Disaster Relief Network and local restaurants and other businesses as partners in recovery.

“It tests us,” he said of the tragedy, “but at the same time it shows us who we really are.”