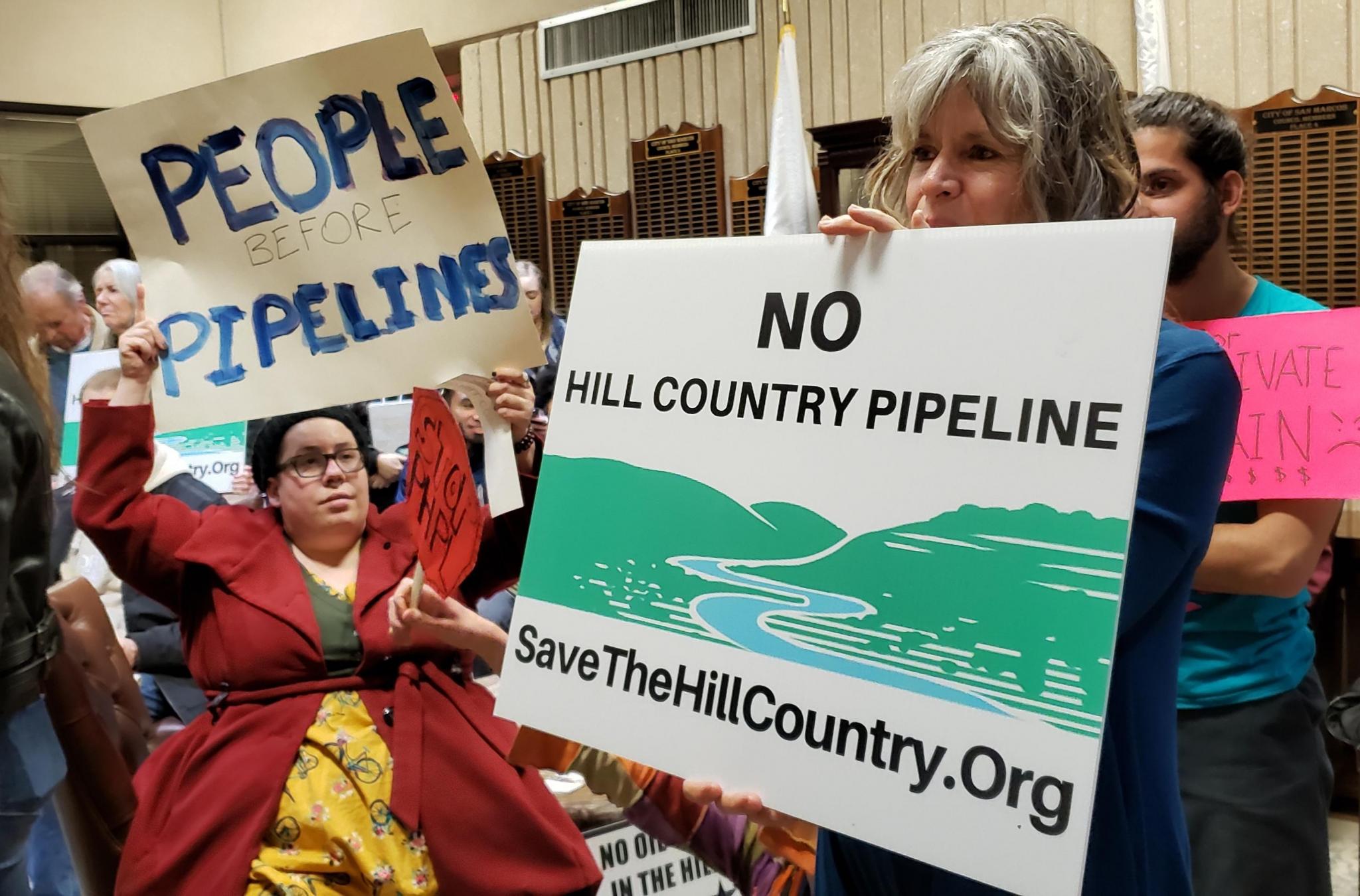 Protestors at the council meeting. Photo by Christopher Paul Cardoza

In addition to stating the city’s opposition to the pipeline, the resolution requests “immediate action by all members of both houses of the Texas Legislature to protect landowners, landowners’ property rights and communities from the negative impact of PHP and other potential oil and gas pipelines.”

Before the council’s vote, representatives from Kinder Morgan and the Wimberley Valley Watershed Association were given 10 minutes each to state their case.

Greg Neal, who described himself as a consultant, asked council to reject the resolution opposing the pipeline.

Neal lauded the oil and gas industry’s contributions to the Texas economy, crediting it with helping to provide “one of the highest standards of living in the United States, with revenues to support our public schools, universities, roads and much more.”

He described the pipeline as a 42-inch line, with a 50-foot permanent easement, that would carry dry natural gas from the Permian Basin to East Texas. He said the route was planned after a “close examination of publicly available information” and a series of surveys.

“Over 120 routing adjustments have been made since the route was initially proposed,” he said.

He also argued that the pipeline serves larger interests.

“And what can we say about Hays County’s support for nation and state of Texas economic and energy priorities?” he asked. “It appears to me there are some who say ‘Go elsewhere, we’re closed. Find another route.’ ‘These transportation projects need new legislative and administrative oversight.’ Was that the tune we were all singing in 2015 and 2016 [sic] when we were rocked, tragically, with historic flooding, death and destruction suffered mightily by our loved ones? Do we still remember the aid and support which came in abundance form every corner of Texas without question, or hesitation? Were we proud and grateful to be Texans then?”

Neal criticized the resolution as “recommending new layers of ill-defined governmental bureaucracy and changing laws which have served the oil and gas industry for over 100 years.”

Neal also tried to allay fears about pipeline safety, saying that Kinder Morgan has “a procedure for monitoring every foot of their pipelines with advanced technology, 24/7, 365” and accusing the opposition of making “hypothetical allegations to build public alarm.”

Ashley Waymouth, managing director for the Wimberley Valley Watershed Association, spoke against the pipeline route. She noted that the association is not against Kinder Morgan or its employees or the energy industry — just the route Kinder Morgan has chosen for the pipeline.

“We can look at this map and see how it flows through the most rapidly urbanizing place in Central Texas,” she said, showing a map reflecting growth in Texas.

Waymouth also cited concerns about other substances being moved through the line.

She also cited a study showing that dye placed in the Blanco River re-emerges in the San Marcos Springs, and during times of drought the Blanco feeds Barton Springs in Austin. The pipeline is currently routed through the Blanco River watershed and crosses the Blanco twice. Moreover, the line runs through the Middle Trinity Aquifer and the Edwards Aquifer recharge zone. These water supplies, Waymouth said, feed both public and private wells.

“What will Kinder Morgan do in the event of a leak?” she asked.

She also pointed out that endangered species depend on the San Marcos Springs, and if the aquifer becomes polluted, they can’t be relocated.

Waymouth also questioned whether tax revenue generated by the pipeline would compare to the revenue lost in tourism and other economic sectors driven by the region’s pristine waters, like the San Marcos River and Jacob’s Well.

Council member Lisa Prewitt asked Neal, “After learning about how precious this aquifer recharge zone is … my question to you is why wouldn’t you consider moving this route?”

Neal said that he is a consultant and would not answer questions about the pipeline’s route, but he said that Kinder Morgan Vice President is “eager to have conversations with this body and other governing bodies in this county.”

Neal explained, “I made my presentation this evening as someone encouraging working with Kinder Morgan as opposed to sanctioning the project and, as I described, punting the project to the state legislature … keep the discussion here locally with the company that’s doing the work. They have oversight with regulatory bodies and I suspect you could engage that entire team.”

Council member Mark Rockeymoore asked for clarification about Neal’s role and whether the viewpoint he expressed represents Kinder Morgan’s viewpoint.

“They reviewed my comments prior to this meeting,” Neal responded, “so yes, they do reflect Kinder Morgan’s interests.”

“So basically, Kinder Morgan would like for us to not vote for this so we can talk to them about it,” Rockeymoore said. Neal agreed.

“I can’t even contemplate why that is the route chosen,” Prewitt said. “... That route goes through the most dense area in the Hill Country. Why in God’s name would you choose that route? That’s where people live.”

“I did not realize that, under existing state law, that the state legislature of Texas decades ago granted the authority of eminent domain to oil and gas companies. I am very concerned any time any kind of government, which has to answer to its citizens, invokes its power of eminent domain because i think that should be used as a last resort,” he said. “... And this is such a broad grant of authority to private, for-profit companies that I’m just stunned that this action to grant such authority was granted in the past and is still existing.”

Council member Saul Gonzales said he agreed with his colleagues’ concerns. Moreover, he said, “If this was really that important for this company, I think the president or the vice president would have been here. For some reason he’s not here, and we don’t know why.”

Mayor Jane Hughson said that she would be supporting the resolution, and she urged the crowd gathered to protest the pipeline to take their efforts to the state legislature.

“I hope you take the energy you’re showing tonight and move forward with that at the state legislature, because that’s where some changes can happen.”