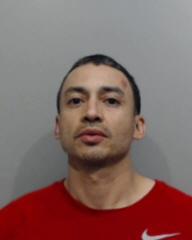 Kyle police arrested Paul Joseph Rodriguez overnight Friday following a high-speed chase that started in Kyle and ended in South Austin. He was charged with aggravated assault on a public servant, possession of a controlled substance, deadly conduct, evading arrest with a vehicle, resisting arrest and failed to identify — fugitive. Rodriguez also had a warrant for his arrest from Austin PD.

Rodriguez, 45, lives in Austin. He was driving a white Ford F-150. KPD stopped the vehicle at approximately 11:40 p.m. on Center Street; the officer was responding to a call about a suspicious vehicle in the area of No Name Road and the Interstate 35 West Access. The patrol officer reported that Rodriguez gave a story that didn’t make sense. He also provided false information to the officer, who ordered him to step out of the vehicle. The officer said the subject refused to get out. When the officer attempted to help the man out of the vehicle, the subject slammed the door on the officer’s arm, causing pain and visible injury. Police are reporting that Rodriguez then fled the scene in the truck.

Two other KPD officers attempted to get Rodriguez to pull over as the pursuit headed north toward Austin. Patrol units from Austin PD eventually entered the pursuit. The Ford left the highway via Exit 225 (Onion Creek Parkway) in south Austin, then continued on the access road past Slaughter Lane. Officers observed the Ford blew out a tire around this time.

Police report that the Ford then headed west on William Cannon Drive, going through the Bluff Springs neighborhood before returning to Slaughter Lane and traveling west. The vehicle came to a stop in the 1600 block of W. Slaughter Lane at the overpass.

During the pursuit, officers report the Ford F-150 disregarded red stoplights and stop signs, drove on the wrong side of the roadway and drove at speeds in excess of 100 miles per hour.

After the Ford came to a stop, Rodriguez was seen fleeing the truck on foot. Officers observed the bed of the vehicle was on fire. Officers found Rodriguez attempting to climb a fence, which is when they apprehended him.

Rodriguez was booked into the Hays County Jail under bonds totaling $55,000.