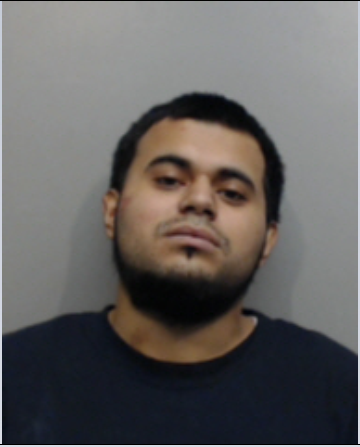 A 19-year-old San Marcos resident remained behind bars on Tuesday for the robbery of a local store.

Abraham Barrera is being held on a $100,000 bond for the first-degree felony offense of aggravated robbery. He is accused of holding up the Planet K at 910 Interstate 35 North on Monday afternoon.

Police responded to the store at 3:04 p.m., where they learned from witnesses that the suspect, who fled the scene before officers arrived, was a Hispanic man wearing a dark hoodie and dark pants, with a dark bandana covering his face.

While police began a search of the area, additional witness information indicated the suspect possibly fled in a tan colored Suburban, and officers located a vehicle matching that description in the 800 block of Sturgeon.

Police set up surveillance there and, “within minutes,” the city said in a press release, Barrera was seen approaching the vehicle and then entering the residence. He was placed under arrest after backup arrived.

“Evidence and property were found at the scene on Sturgeon as well as the firearm used in the robbery,” the city said. “Investigators determined the firearm to be stolen,” the press release continued without explaining when, where and how that theft occurred.

Theft of a firearm is a state jail felony.

Barrera also has a charge of evading arrest pending in Caldwell County.