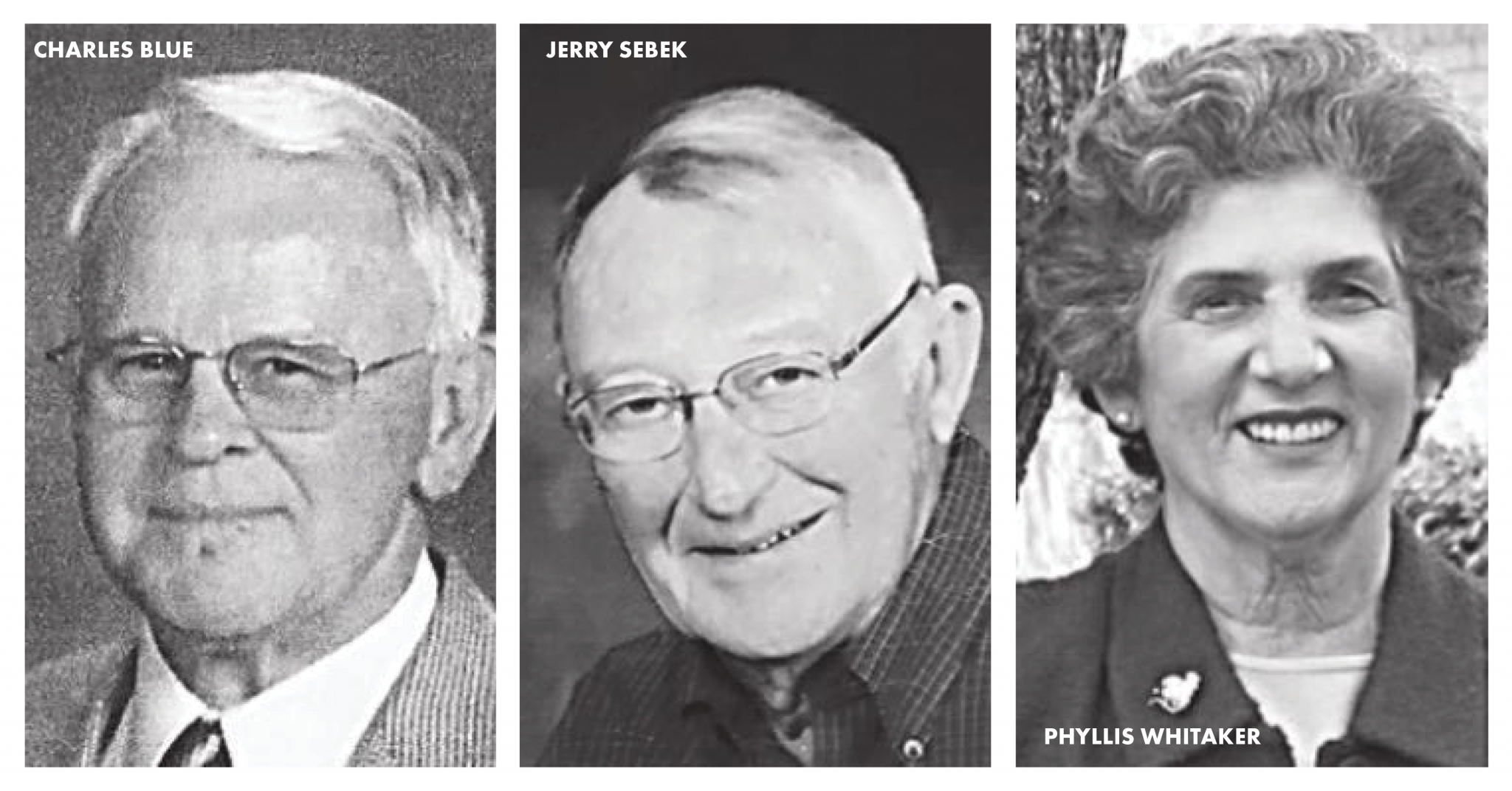 “You make a living by what you get. You make a life by what you give,” so said former Prime Minister Winston Churchill. Our San Marcos community has had the good fortune of having generations of devoted volunteers who have given generously to build the organizations and institutions that enrich our lives today. In recognition of that spirit of volunteerism, the Riverwalk Committee and the Heritage Association of San Marcos annually remembers late members of the Association who were generous with their time and talents for the benefit of our community with the Heritage Tree of Honor award. Phyllis Whitaker, Jerry Sebek, and Charles Blue are the 2020 honorees.

Charles (Chuck) Blue brought to life the concept of service — to family, to country, to church, and to community. After earning a degree from Oklahoma State University, Blue embarked on a distinguished Army career. He served tours in Europe and Vietnam as well as completing numerous stateside assignments. Upon retirement from the Army, the Blue family settled in San Marcos where they became thoroughly immersed in community life, and Charles started a new career at the McCoy Corporation. Blue and his wife, Francile, became active members of the Heritage Association. They restored a San Antonio Street home and made it available for Heritage home tour events. Blue was an enthusiastic volunteer, serving lunches at the Cock House, acting as docent at home tours, serving on committees, and chairing one of the Christmas Tours. Additionally, Blue gave his time and expertise to other groups including the Hays-Caldwell Women’s Center Board, Meals on Wheels, the San Marcos Transportation Board, City of San Marcos Advisory Board, and the First Presbyterian Church. He is fondly remembered by community friends as being kind, wise, and polite always.

Barely born in Texas (Texarkana), Phyllis Whitaker was the epitome of everything Texas. Whitaker possessed a generous and magnetic personality t h a t brought joy to all who encountered her. The exuberance of her debutante days of youth never left her. San Marcos was a fortunate recipient of Whitaker’s dedication and talent when she and her husband, Jay, moved to town. She attended the University of Arkansas in Fayetteville. Whitaker enjoyed her work, first in the field of medical technology, then later in real estate. She worked for many years with Randall Morris & Associates. Whitaker was a valued member of the Heritage Association Guild and faithfully assisted with and attended Cock House Friday lunches. She was active in the wider community, too. She was a faithful member of St. Mark’s Episcopal Church. Whitaker enjoyed active membership in the Junior Sorosis Club, the Bobcat Club, Garden Club, and served on the Board of the Friends of Fine Arts at Texas State. Whitaker was fun. She had a continually full social calendar of concerts, football, bridge, and lunches. Whitaker was friendly and outgoing, a gifted conversationalist with a contagious smile and big, expressive, brown eyes.

Jerry Donald Sebek would do anything for anyone. He moved his young family to town in 1964.Pleasant, honest, kind, respected, down-to-earth humor are words that portray Sebek. For over 45 years Sebek owned an insurance business in town. He wore many hats at the Methodist Church from teaching in Vacation Bible School to leading the Men’s Breakfast Organization. A star college athlete himself, Sebek coached City T-Ball, Little League, Pony League, and softball for his three children and their friends. Sebek spearheaded the move of the San Marcos Softball complex to its current location. During retirement, Sebek remained generous. He served on the San Marcos City Cemetery Board and was active in the Heritage Association. He was a member of the Heritage Riverwalk Committee for 10 years. Sebek was appointed Steward of Properties for Heritage and where he oversaw work on properties in Veramendi Park. Sebek was named Heritage Member of the Year in 2015. Kindness was Sebek’s most memorable attribute. One example: Sebek was working at the Cottage Kitchen one very cold morning when a homeless, barefoot man came to the back door. Sebek sized up the man’s situation and took action. He removed his own shoes and socks and gave them to the cold stranger. That typified Jerry Sebek: friend.

What is the Tree of Honor? It is an event began some twenty years ago by the Riverwalk Park Committee and the Heritage Association to remember members who have died within the past year and who, during their lives, made outstanding contributions of time and talent to the Association. Members of the Riverwalk Committee include Sue Cobb, chairperson, Sue Cohen, Robert Cotner, Carmen Imel, Jean Mooney, Beverly Owen, and Bette Taylor. San Marcos Parks and Recreation personnel who work with the committee are Bert Stratemann and Kelly Eby.

•Submitted by the Heritage Association of San Marcos