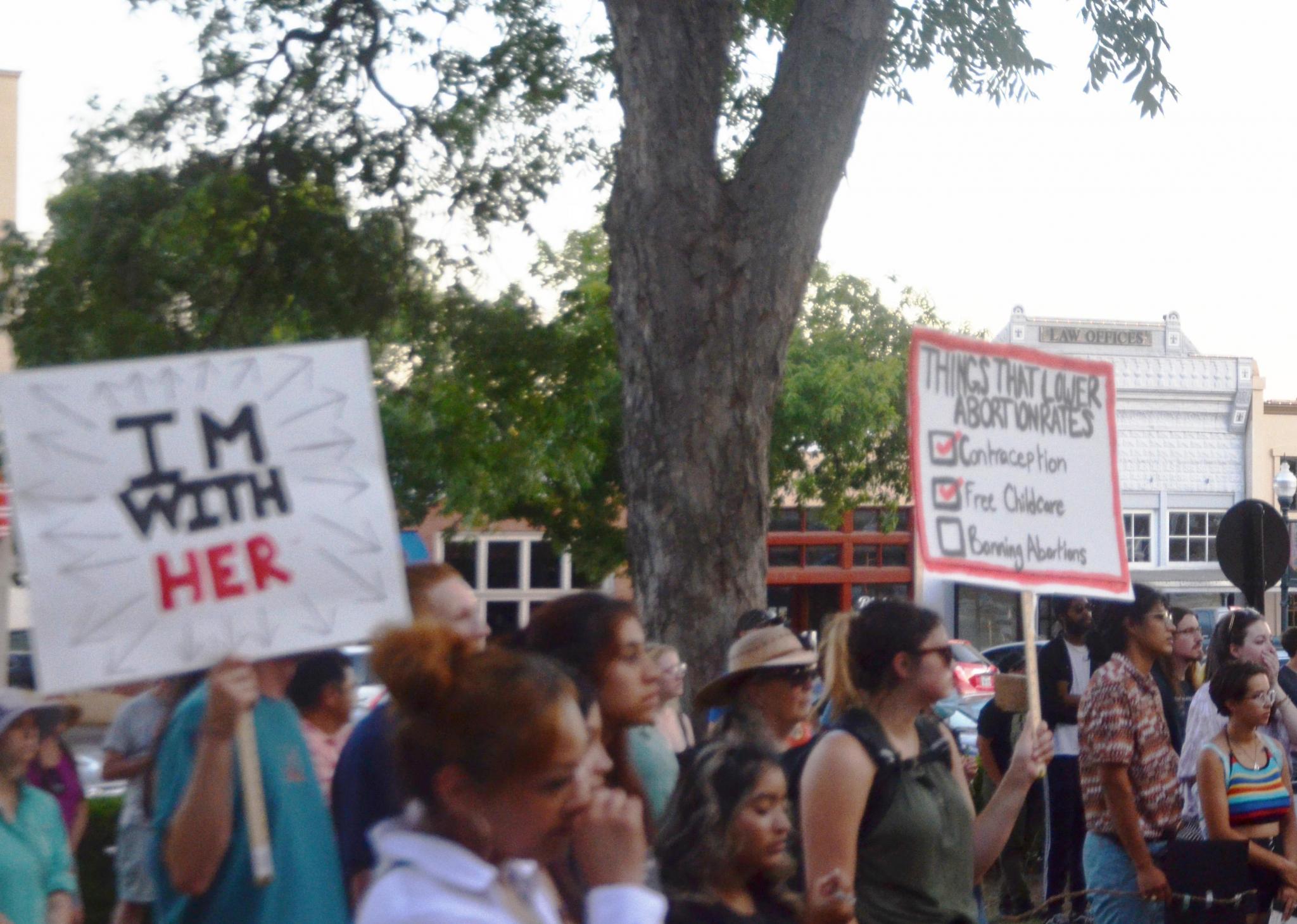 Hundreds of abortion rights supporters voiced their opposition to Friday’s decision. The court’s ruling puts into effect Texas’ “trigger law” which will ban all abortions in the state with the exception only to save the life of a pregnant patient or if the patient risks “substantial impairment” of a bodily function.

“We need to be mindful to not only extreme cases but to defend all abortion,” Sam Benavides told the crowd Saturday. “I think we all know and deeply care for somebody who has gotten an abortion and it’s sickening to think that other people in need of abortions will no longer have the ability to choose their own path the way that I did.”

The Supreme Court voted 6-3 to uphold a Mississippi law restricting abortions after 15 weeks, while voting 5-4 to overturn Roe v. Wade. Justices Samuel Alito, Clarence Thomas, Neil Gorsuch, Brett Kavanaugh and Amy Coney Barrett voted to overturn Roe with Alito writing for the majority that the Constitution didn’t confer the right to an abortion.

“Roe and [Planned Parenthood v. Casey] must be overruled, and the authority to regulate abortion must be returned to the people and their elected representatives,” Alito wrote.

Justices Stephen Breyer, Sonia Sotomayor and Elena Kagan wrote in dissent: “With sorrow — for this Court, but more, for the many millions of American women who have today lost a fundamental constitutional protection — we dissent.”

“Texas is a pro-life state, and we have taken significant action to protect the sanctity of life,” Abbott said in a statement. “Texas will always fight for the innocent unborn, and I will continue working with the Texas legislature and all Texans to save every child from the ravages of abortion and help our expectant mothers in need.”

Texas’ trigger law goes into effect 30 days after the court’s judgment is issued, not its opinion, which was released Friday, according to Texas Attorney General Ken Paxton.

“So while it is clear that the Act will take effect, we cannot calculate exactly when until the Court issues its judgment,” Paxton said. “My office will publicly announce an effective date for the Act as soon as possible.”

“Abortion is never an easy decision to make regardless of socioeconomic status, regardless of their backgrounds,” Abagail Milam told the crowd gathered at the Hays County Historic Courthouse. “Abortion is a highly traumatic experience for anybody who has to go through one.”

“Before this issue became so acute this week, we all knew it was coming since March,” Higgins said. “But I’ve been focused on other things in my campaign like cannabis, which I also will not prosecute.”

“My colleagues in the Texas Legislature, my anti-choice colleagues, most of them also did not expect to be here today. They did not expect Roe to be overturned,” Zwiener said. “They thought we lived in a world where they could promise big promises for the pro-life movement and that they would never have to pay the real world, or political consequences for those promises. Well, now they’re the dog who has caught the car. Y’all are angry, people around the state and country are angry … Every single [elected official] needs to hear from you, asking them what they’re doing to help because this is a crisis that is going to take everyone to address it and we have the power to change this. It’s not going to change overnight. Even if we have a really great November, it’s not going to change by November. This is going to be a fight where we’re going to have to buckle down and do the work for years”