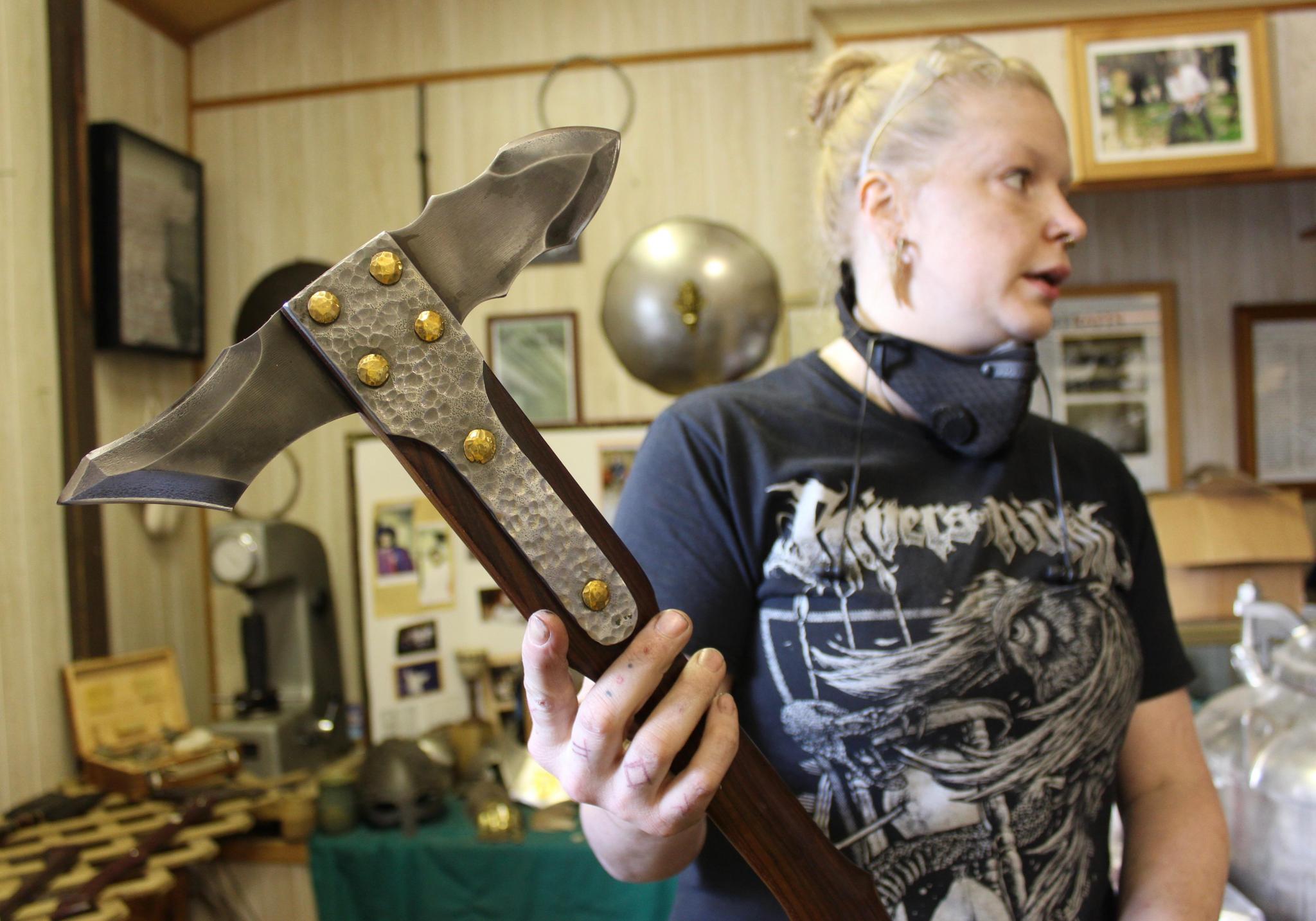 Some of the best knives — and swords — you will find are made in Driftwood at Angel Sword. Above, Kirsten Kulland holds one of the custom axes available at Angels Sword. Below,  Shop Foreman Ryan Lynch etches an intricate design into an Angel Sword creation. Photos by Cris Peterson via Wimberley View

Knives have been around for more than two million years.

Hunters have carried knives since the beginning. Soldiers and chefs use them. You cut your steak with one and shuck oysters with another. They are part of religious ceremonies. Some people even juggle them.

And, some of the best knives — and swords — you will find are made in Driftwood at Angel Sword.

Wimberley resident Kirsten Kulland, got her degree in metal smithing and jewelry making at the University of North Texas, and now makes knives and swords at Angel Sword.

Where are the best knives in the world made? Kulland’s answer: “The best knives are made in Texas because we (Angel Sword) are here. In my opinion people don’t need to go anywhere else.”

The swords and knives are true works of art. The blades are made from hardened carbon steel and will hold a razor-sharp edge for a long, long time — depending on its use. Many of the blades have intricate etchings. The handles and guards (the part that separates the handle from the blade) are unique and, often, ornate. Kulland has embedded garnets in the eyes of a raven on one sword handle — putting her jewelry-making skills to use. The swords are surprisingly light and perfectly balanced.

Kulland has been working at Angel Sword for about three years. She served a year-and-a-half internship in Dallas before being hired by Daniel Watson, the long-time owner of Angel Sword. She came down for a weekend knife-making workshop in Driftwood and has never looked back. “I learned more in the two-day period than in all that time in Dallas,” she says.

“I have always been interested in metal,” she adds. 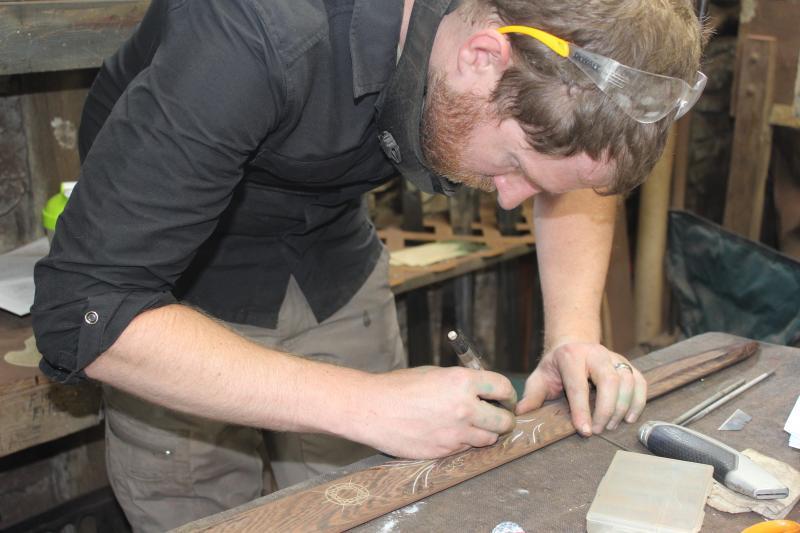 Kulland points out that each creation is a group effort. Some of Angel Sword’s eight employees are skilled metallurgists, others are expert at cutting and shaping the blades, some specialize in the artistic side.

The knives and swords are sold at various events including Renaissance Faires. Custom orders come in from all over the country. To visit the local showroom, you’ll need an appointment.

Many of the creations are used as decorations. Both Kulland and Watson encourage customers to actually use the knives and swords. “We encourage people to use our blades. If something catastrophic happens to the steel I want to know what happened to it,” says Kulland.

Knives have always been an essential tool and weapon. Early knives were fashioned from wood, bone and sharpened stone. During the Copper and Bronze ages, metal was used to make knives and while the blades were more streamlined and sharper, they dulled easily and corroded. Later, iron was a big improvement. The process evolved over the centuries into today’s hardened carbon steel blades.

Angel Sword uses a patented process for its blades. “People ask what kind of steel we use. It’s hard to answer that question because it’s our own,” says Kulland. “Watson wouldn’t want me telling you any more than that,” she says with a smile.

Basically, the metal is heated and the carbon content is increased to create a tougher blade. The harder the metal the better it will hold a sharp edge. The blade is then cut to shape and ground down. The process allows Angel Sword to make a thinner, but more durable blade. The result: a remarkably lightweight product. Finally, the embellishments are added. “We make the finest weapon we can, then it is decorated,” says Watson.

A lot of creativity goes into each design. One former employee was a drummer and fashioned a sword guard out of one of his old cymbals. Many of the blades feature complicated etchings that are hand drawn on the steel and then dipped in acid leaving the design imprinted on the blade.

Each knife or sword — as well as some of the axes they produce — is perfectly balanced. Instead, Kulland demonstrates by holding out her finger and balancing a sword a couple inches from the handle.

“He (Watson) is doing things with metal that nobody else is doing,” says Kulland. “Each one is 100 percent handmade here. We don’t buy from anyone else.”

Over the years, many of Angel Sword’s creations have been featured on the covers of books and video games such as “Dungeons and Dragons” as well as in the movie “Crocodile Dundee.”

It’s impossible to pinpoint an Angel Sword style. Many are influenced by the Japanese “katana” sword, a curved, single-edge blade with a long grip made to accommodate two hands — the kind you often see in a samurai movie. Others are a nod to European or Middle Eastern creations. There are a couple Chinese-inspired swords hanging on the wall of the showroom — each about six feet long — that were designed to cut through both enemy riders and horses.

Kulland warns not to touch the blades and demonstrates the sharpness by quickly turning a sheet of paper into confetti. How many times has she been cut? “It has happened,” she says, “but I try to keep it to a minimum.”

In addition to the lifetime guarantee, Angel Sword offers a trade-up plan. If you buy a sword and want a better one, you will always get, at least, the original price on your trade-in. The one-of-a-kind products generally increase in value over the years.

Angel Sword has been at its Driftwood location since 1981. “We are the oldest and largest custom sword maker in the U.S.,” Watson says. He adds: “But we are always designing new styles — new artist’s styles — and using new technologies.”

If you would like to arrange a visit to the showroom, it’s by appointment only and can be arranged through Angel Sword’s Facebook page: www.facebook.com/AngelSwordLLC/