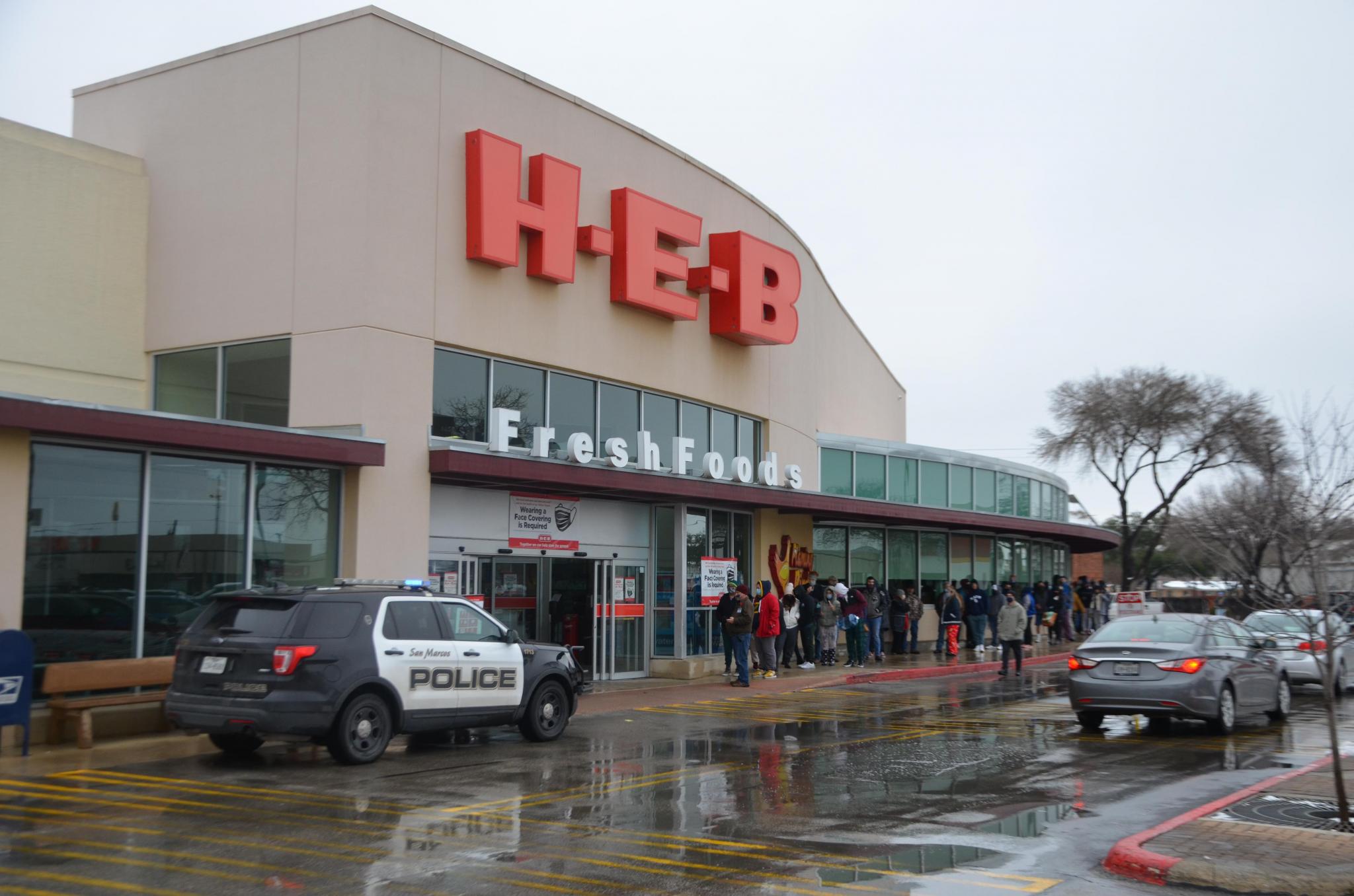 Above, San Marcans wait in a line outside the H-E-B located at 641 E. Hopkins St. on Wednesday. The line stretched from the entrance around the block and ended near the Bobcat Stadium parking lot. Those in line waited nearly 40 minutes to get inside the store. Daily Record photo by Nick Castillo

Some wore layers of clothing in their own homes just to stay warm. Others trekked through the snow to walk to their friends’ houses just to seek shelter. They waited in long lines searching for a bite to eat from a local restaurant, or to snag supplies from a grocery store.

These are just some of the ways San Marcans — and those across Texas — endured this week as they lived through a time like no other.

Zachary Genin, 23, lives on Craddock Street and saw his power go off around 2 a.m. on Monday. After the snow blanketed San Marcos and the city began to see widespread power outages, Genin hiked five miles to stay with his friends because they had rolling blackouts as opposed to the shutoff he saw this week.

“(My friends) had a rolling blackout which was somehow a reprieve from all of this,” Genin said as he stood in line at H-E-B on Wednesday. “So, I’ve just been chillin’ at their house … (The trip) was hard. I had to wear a sock instead of a glove because I didn’t have any gloves. I’m wearing three jackets right now. It was hard.”

San Marcos dealt with winter weather throughout the week. As well as power outages, after the Energy Reliability Council of Texas entered its third and highest level of emergency operations because electric demand exceeded available supply at approximately 1:25 a.m. on Sunday. Following power outages, San Marcans saw an increased need for food as it began to spoil in fridges without electricity.

Jessie Garcia, 33, was one of many who braved the cold Wednesday to stand in line to pick up groceries and supplies from H-E-B. He stood in the line, which stretched from the store entrance at 641 E. Hopkins St. around the corner to the Bobcat Stadium parking lot, for nearly 40 minutes.

“It’s been somewhat stressful without water, and electricity coming and going,” Garcia said. “Other than that it’s been fairly well. It’s been complicated for our children, especially because the internet services have been coming in and out, so that’s been non-existent. But, as far as how we’re at home, we’ve been well. You know, it stays warm. We have a gas stove so we’ve been keeping that flowing. We’ve had a good experience overall other than the stress of not having running water or the food is starting to run out. So, standing out here is a meaningful sacrifice.”

San Marcans also saw water issues with pipes frozen followed by bursting pipes. The City of San Marcos also issued a boil water advisory Wednesday night for its water customers as a precautionary measure. The city said the likelihood of contamination was low.

Bryson Henderson, 25, said he was worried about water leaks at his apartment complex near McCarty Lane.

“I guess the pipes were frozen,” Henderson said. “They gotta be. I’m scared to run it because I’m scared to make the pipes burst. It could probably be above my bedroom when the water is running. If I run it, it’s probably going to start leaking … Hopefully, it doesn’t.”

Looking back at the week, Genin said he didn’t have much warning about the potential for power outages beyond seeing it on Facebook and hearing from his friends in Austin.

“I couldn’t imagine what it would be like,” Genin said. “Until it happened to me.”