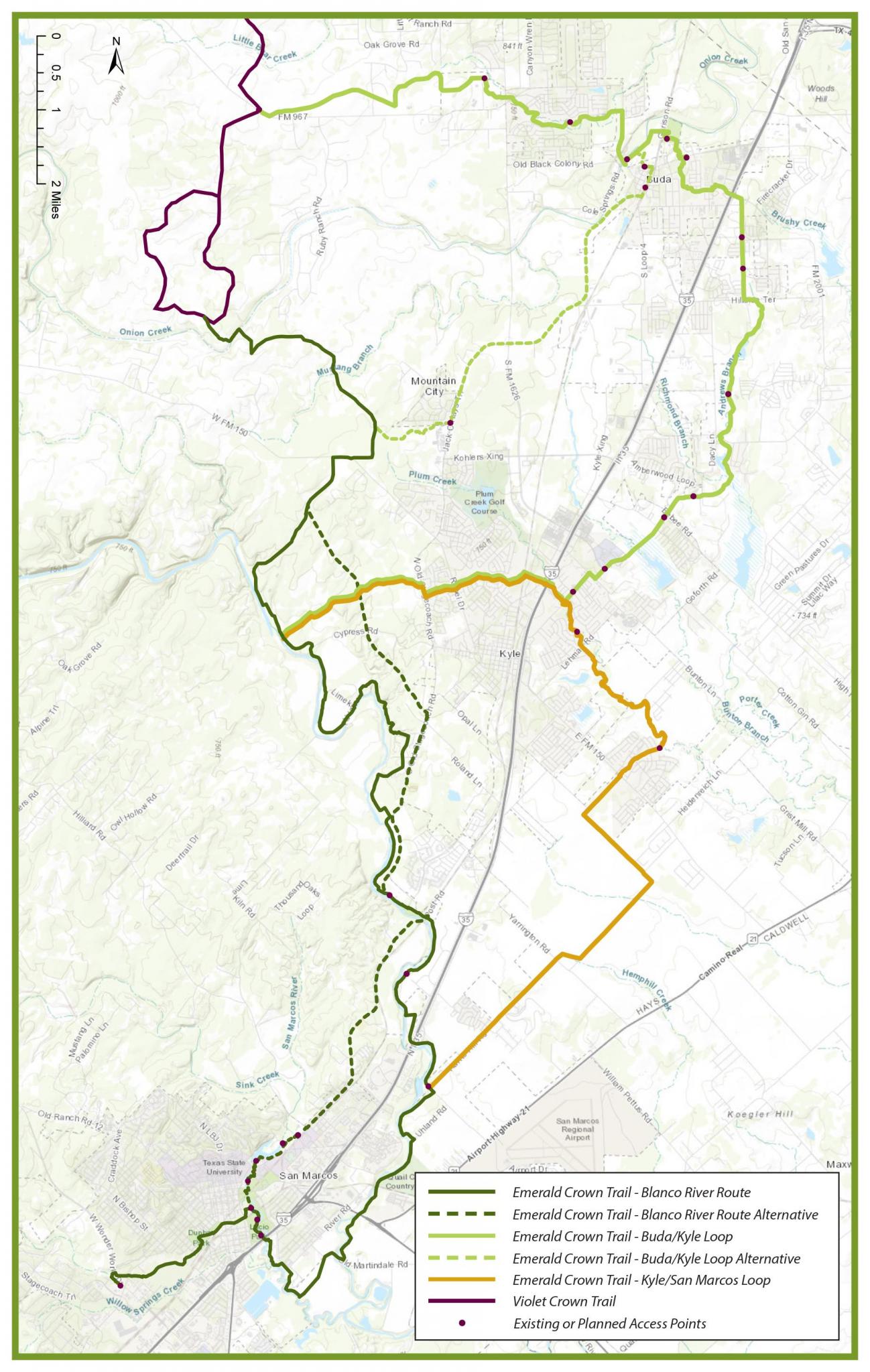 The Emerald Crown Trail would link the communities of San Marcos, Kyle and Buda. Map provided by the Regional Trail Work Group.

San Marcos has officially expressed support for Emerald Crown Trail, a concept that would link Eastern Hays County through trails.

This Tuesday, City Council passed an ordinance which expresses support for the trail proposal and directs staff to continue to work with the trail’s work group.

In 2017, the project was initiated by the San Marcos Greenbelt Alliance, but now includes a number of partners, according to Sherwood Bishop, president of the San Marcos Greenbelt Alliance. Partners and stakeholders involved in the Regional Trail Work Group include individuals from the Meadows Center, Guadalupe Blanco River Trust, Hill Country Conservancy, Take-a-Hike San Marcos, the Texas State Geography Department, the cities of San Marcos, Kyle, Buda and Hays County.

“The idea is to have a regional trail for eastern Hays County connecting San Marcos, Kyle and Buda together in the short term,” Bishop said during his presentation to council. “In the longer term we hope to have connections from downtown San Marcos to downtown Austin on down south to New Braunfels, west perhaps from San Marcos toward Wimberley and Dripping Springs, maybe east as well.”

As part of the ordinance, City Council commits to not use eminent domain to acquire easements for the trail.

“The whole idea of Emerald Crown Trail is that it’s a voluntary thing,” Bishop said. “Working voluntarily with land owners, with the cities, and organizations like that to achieve those things.”

According to Bishop, the group was originally inspired by the Violet Crown project in Austin, which started approximately 20 years ago. The idea of the Violet Crown Trail is to have a trail starting near downtown Austin on the shore of Lady Bird Lake that would stretch south through Travis County into Hays County.

“The idea of the Emerald crown trail is that we would have a trail that would start in lower Purgatory here, go down Purgatory Creek near downtown San Marcos, down the San Marcos River and then up to Five Mile Dam and hopefully connect to the Violet Crown trail there,” Bishop said.

Since the start of the Emerald Crown project, the working group has hosted three public workshops to gather input on design, amenities and issues or challenges.

By working with the National Parks Service, the group has developed a master plan for the trail which has been presented to the parks boards and city councils in Kyle and Buda, according to Bishop. On Aug. 15, San Marcos’ Parks and Recreation Advisory Board unanimously approved a recommendation of support for the trail proposal.

Parts of the trail could be paved, crushed granite/limestone, or natural surface trails. According to the proposed master plan, which is still a conceptual plan, the trail is meant to be a “‘spine’ trail that will tie together both existing and new trail segments in Hays County.”

“We want to work now on beginning to implement and create the actual trail itself, each different city deciding for itself how it will spend money, what its priorities will be, things of that nature,” Bishop said.