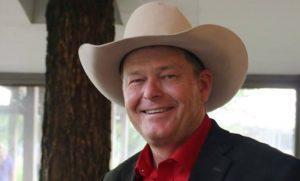 Jones, who was first elected in 2010 and then re-elected in 2014 and 2018 to represent precinct 2 which encompasses much of Buda and Kyle, will run in the Republican primary.

“Over the past 11 years, I have focused on rapidly expanding roads and infrastructure across the fastest growing part of the fastest growing county in America, while also delivering the high-quality core services we depend on for our safety, security, and quality of life,” Jones said. “We have before us a critical window of opportunity to invest in our roads and highways, public safety infrastructure, economic future, support services, natural environment and recreational opportunities. The decisions we make today will determine the community we have 10, 50, and 100 years from now. I am running for this office because our success requires a county judge who can be trusted to do what’s right and deliver on what matters most.”

In his campaign announcement, Jones highlighted improvements and expansions made to many of Hays County’s crowded corridors, including FM 1626, FM 967, FM, 2001, SH 21, Dacy Lane, Interstate 35 as well as the completion of State Highway 45 SW. Additionally, Jones also highlighted his support for law enforcement and first responders.

Jones previously served as a two-term trustee and vice president of the Hays CISD Board of Trustees prior to his time as a county commissioner. Jones stated that during his time on Hays CISD board that he was responsible for “for leading one of Hays County’s largest employers and managing a budget in excess of $100 million.” Hays CISD also saw four new schools open, long-term plans developed and improved student performance, Jones said of his time on the board. Additionally, Jones served on Plum Creek Conservation District Board of Directors.

According to the Secretary of State’s office, Jones has not officially filed for election. Additionally, another Republican candidate for Hays County Judge has not filed either. In the Democratic Primary, Incumbent Ruben Becerra will face a challenge from Brandon Burleson.

Early voting for the Republican and Democratic primaries begins on Monday, Feb. 14, 2022 with election day on Tuesday, March 2.