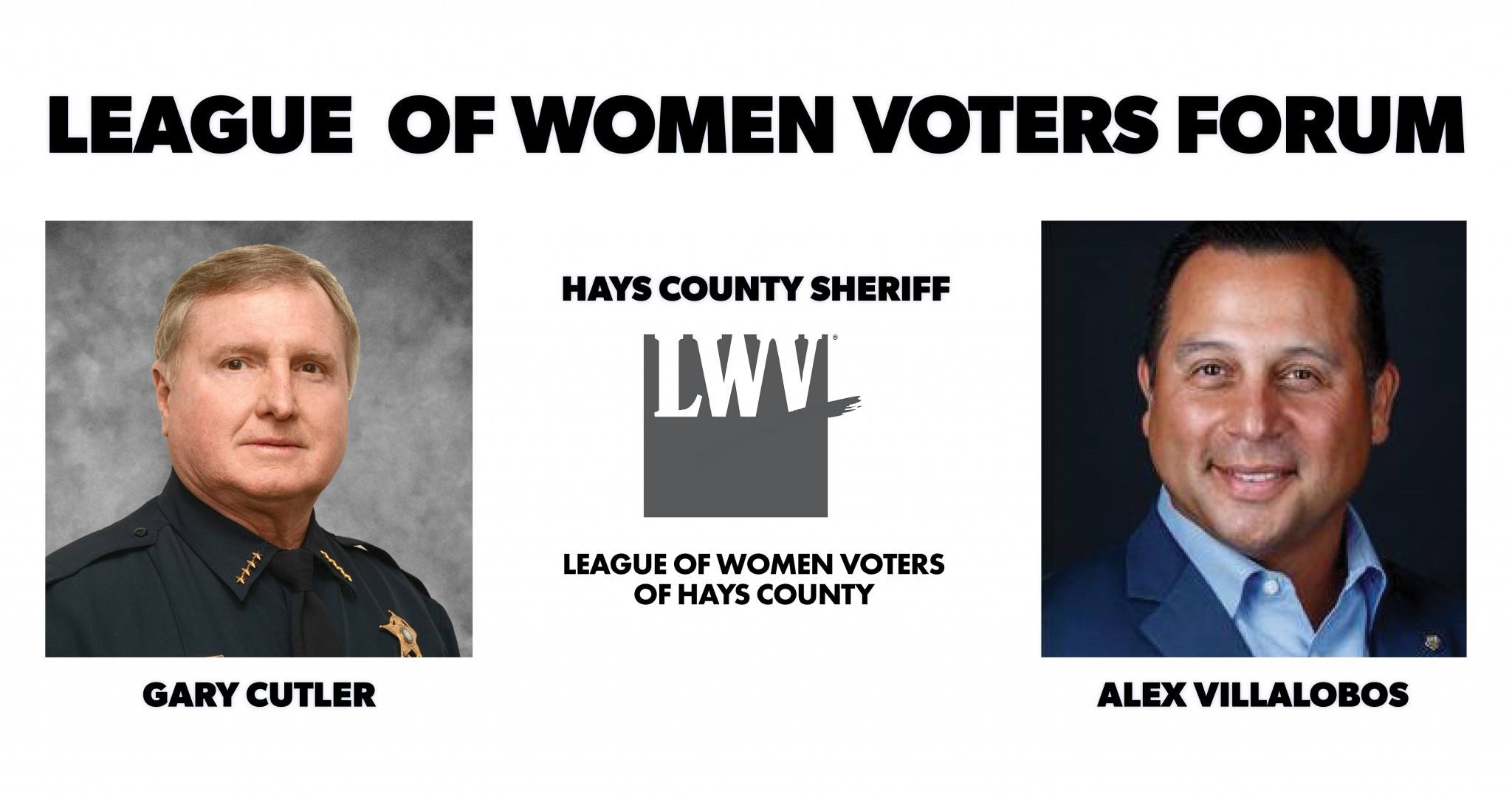 Moderated by Vice President of the State of Texas LWV Board of Directors, Dorothy Marchand, the two Sheriff candidates answered pressing questions from both the League and residents.

In their opening statements, both candidates cited their many years of law enforcement experience and education preparing them to hold the highest law enforcement position in the county.

Cutler spoke to his criminal justice degree and years both as a Peace Officer and an Administrator as necessary experience for a county sheriff.

Villalobos focused on how he would prepare the department for a more urban future as Hays County grows. He spoke about modernizing their approach to law enforcement and improving training, equipment and recruitment plans.

In response to law enforcement’s needs for a growing county, Cutler pointed to what has already been done to address growth; 2016’s public safety bond building a new public safety building and a larger jail to bring outsourced inmates back to the county. Cutler also mentioned increasing patrol and supervisors on the streets, adding a mental health professional to their mental health unit and expanding training.

Villalobos wants to assess and fix problems from within first starting with a robust recruitment and retention program and moving towards building better community relationships. He mentioned encouraging upward mobility within the sheriff’s department, modernizing divisions and recruiting specialized officers.

Recent public comment in commissioners court meetings urged the commissioners not to accept items from the Federal 1033 program which provides local law enforcement with excess military equipment including tactical weapons and medical equipment.

When asked about the cost benefit to the taxpayer, Villalobos acknowledged a need to demilitarize law enforcement and their approach but focused on the invaluable emergency response equipment that comes through that program as well.

Cutler said he supported the program wholeheartedly citing a $600 to $800 taxpayer savings per rifle gained through that program and said Hays County does not have any military tanks.

To limit the Hays County Jail population Cutler mentioned the upcoming opening of the new jail to create more capacity as well as programs such as cite and release that have been utilized more frequently. He also mentioned the pending Cite and Divert program initiated under his office.

Villalobos spoke about assessments conducted in 2010 and 2016 that said there was no need for a jail expansion and recommended new interventions such as pretrial services, diversionary programs, supervision programs and alternative court programs that would allow them to address the criminal justice system in a more efficient manner.

To address deescalation and safe arrest practices, Villalobos said policy and operational assessments are necessary to determine what exactly is putting officers and citizens in harm’s way.

“I would support deescalation techniques, diversity training, supporting implicit bias training and allows officers the highest probability of success on a daily basis out in the field,” Villalobos said. “Programs that create community engagement and legitimacy and better relationships with our community.”

Cutler emphasized training and said the department already does deescalation and mental health training, training that is mandated by the State of Texas, he said they would continue to implement training practices mandated by the state. He said he would expand those training options and teach frequently.

In response to Senate Bill 4, the candidates were asked what protocols would be established to safeguard against racial profiling.

Cutler said, “Racial profiling is not an issue. We teach that in our academy ... When it comes to immigration it's real simple. If you’re illegal in the United States or in Texas, do not commit a crime in Hays County because you are subject to go through an immigration process.”

Cutler said the Sheriff’s Office would continue to work with ICE and will detain those who have a detainer from ICE.

Villalbos said, “Unintentional consequences of policies that are in place that are hard to understand for people that come from other countries is what’s created the idea that there’s racial profiling.”

Villalobos said he believes in detangling the system, providing good educational pieces for people that are engaged with law enforcement, and reducing arrest and jail bookings by using cite and release and diversionary programs for low level nonviolent crimes.

In closing both candidates spoke to their integrity and credibility, integral qualities for a sheriff, they both said.

Villalobos pledged to continue his career in building community and empowering people to access government processes. He has a goal of humanizing law enforcement and creating a fair working environment.