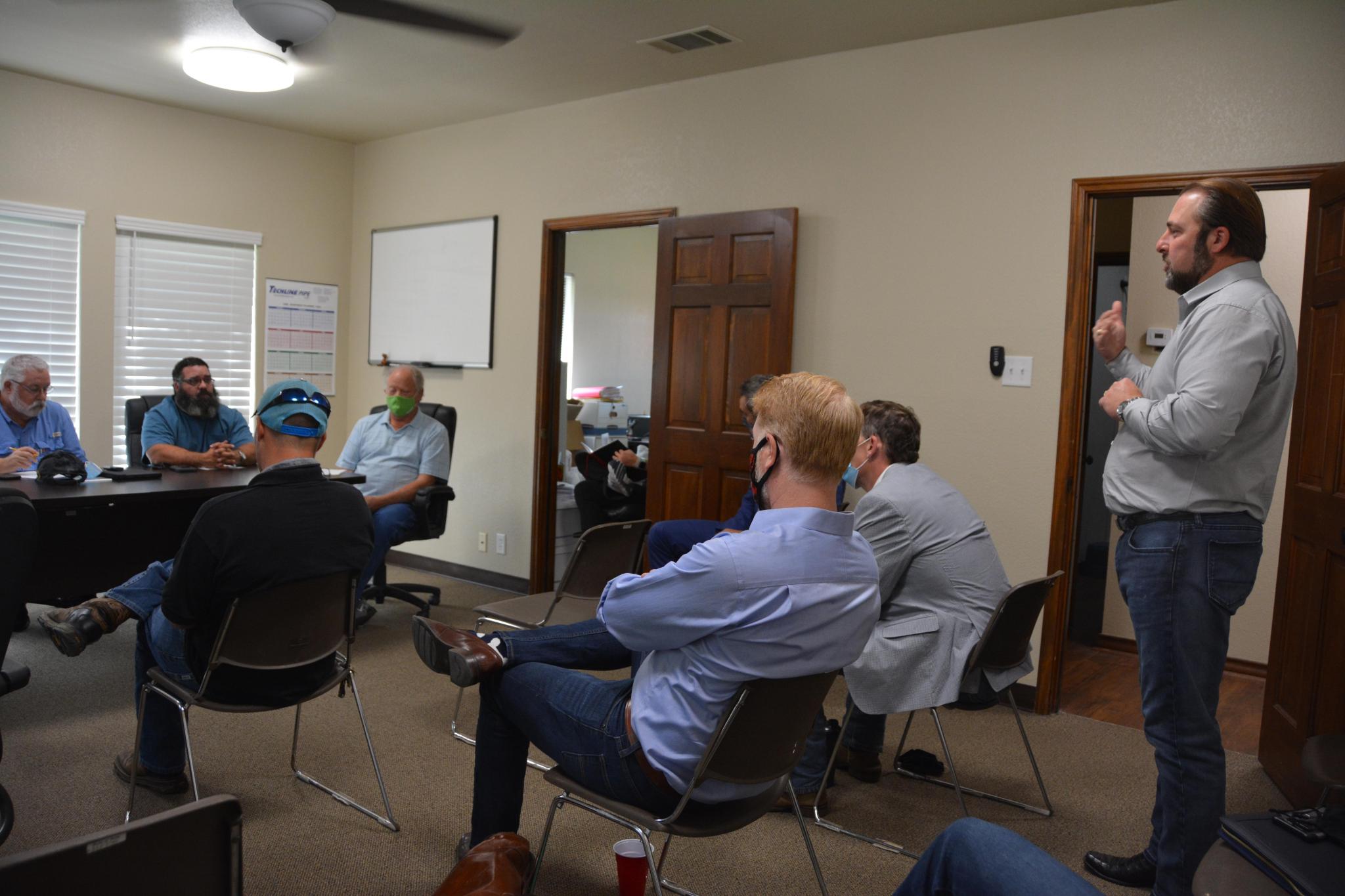 Above, Will Conley (right) speaks to the Dripping Springs Water Supply Corporation Board of Directors on Monday. Photo by Bonnie Gonzalez

DSWSC says no to water purchase offer by Electro Purification

The Dripping Springs area needs water and Electro Purification (EP) wants to provide it, but at a special meeting held on Monday, the Dripping Springs Water Supply Corporation board (DSWSC) stated they are not interested in doing business. At least, not in regard to the contract most recently offered by EP to the DSWSC for the purchase of water.

Electro Purification has a long history in Hays County dating back to 2015. Both local residents and politicians alike have battled with the company trying to prevent it from pumping what was initially planned as more than four million gallons of water per day from an area in Driftwood. That continued battle was apparent on Monday as multiple people spoke out against the potential of DSWSC partnering with EP.

“I want y’all to be made aware of how controversial this is and what this means to the people that I represent,” Precinct 3 Hays County Commissioner Lon Shell told the DSWSC board. “At the same time, I understand the growth that you’re experiencing here. This 290 corridor is unbelievable and I can’t imagine the challenges y'all are faced with trying to provide water to this current population. I know it’s very difficult. I’m here to also offer help. The county is willing to help you all find other solutions. We’re not here just to tell you it’s a bad idea.”

Precinct 4 Commissioner Walt Smith was also at the meeting and offered his “firm commitment” to help the DSWSC board. Smith also sits on the Board of Directors for the West Travis County Public Utility Authority (WTCPUA), one of the water suppliers, for DSWSC.

Former Precinct 3 Hays County Commissioner Will Conley also pledged support pro bono as a consultant and told the board that EP is “not a good business partner.”

Ed McCarthy, an attorney for EP, told the DSWSC board that the company has a permit pending with the BSEAD for water to be produced in Hays County. “EP has done test wells and done modeling and studying of that and presented all that to the district in the application which would allow if granted a production of a maximum of 2.5 million gallons a day,” McCarthy said. “It would be phased in half million gallon increments. Those are designed to proof up the science that supports EP’s application and demonstrate that there won’t be an adverse effect on the aquifer or on neighboring wells.”

Science is something the Trinity Edwards Springs Protection Association (TESPA) is imploring the DSWSC board to consider. In a statement to the board, TESPA Executive Director, Patrick Cox stated that “significant scientific evidence will be offered at a contested hearing in April 2021 that demonstrates EP’s proposed well field will result in a major decline of the Trinity Aquifer.”

DSWSC Director Travis Crow agreed that the science among other things does need to be examined. “We need water. We’re not denying that. We want water, but the numbers don’t match,” Crow said, alluding to the price tag attached to the contract. DSWSC Vice President also noted his disappointment with the numbers. “I don’t want to be rude Ed, but this contract right here as it’s written will bankrupt the water supply corp. in three to four years,” Key said. “We’ve got no guarantees of water. It frustrates me. I’m going to be honest. I’m not happy with it. If y'al want to resubmit it, that’s fine … I feel like it’s kind of insulting honestly guys because it’s so one sided and so unfair towards our people, that we would be doing the people of Dripping Springs the greatest disservice.”

The DSWSC board opted not to accept the terms of the contract presented to them by EP. DSWSC Board President William Jackson, however, told EP representatives that there remains a possibility in doing business. “We still are interested in the possibility of purchasing water from EP but we think we need to see from you a revised contract before we really enter into negotiations,” Jackson said. “We want to give you time to talk with your council, prepare something for us and I plan on including this discussion back on our agenda, to discuss publicly for our January meeting. I think that gets us closer to when your SOAH meeting is and then all of the players will know more and have better information with which to make a decision.”

Details of the contract offered by EP were discussed in executive session and have not been made available to the public at this time.

Dalton Sweat contributed to this report.