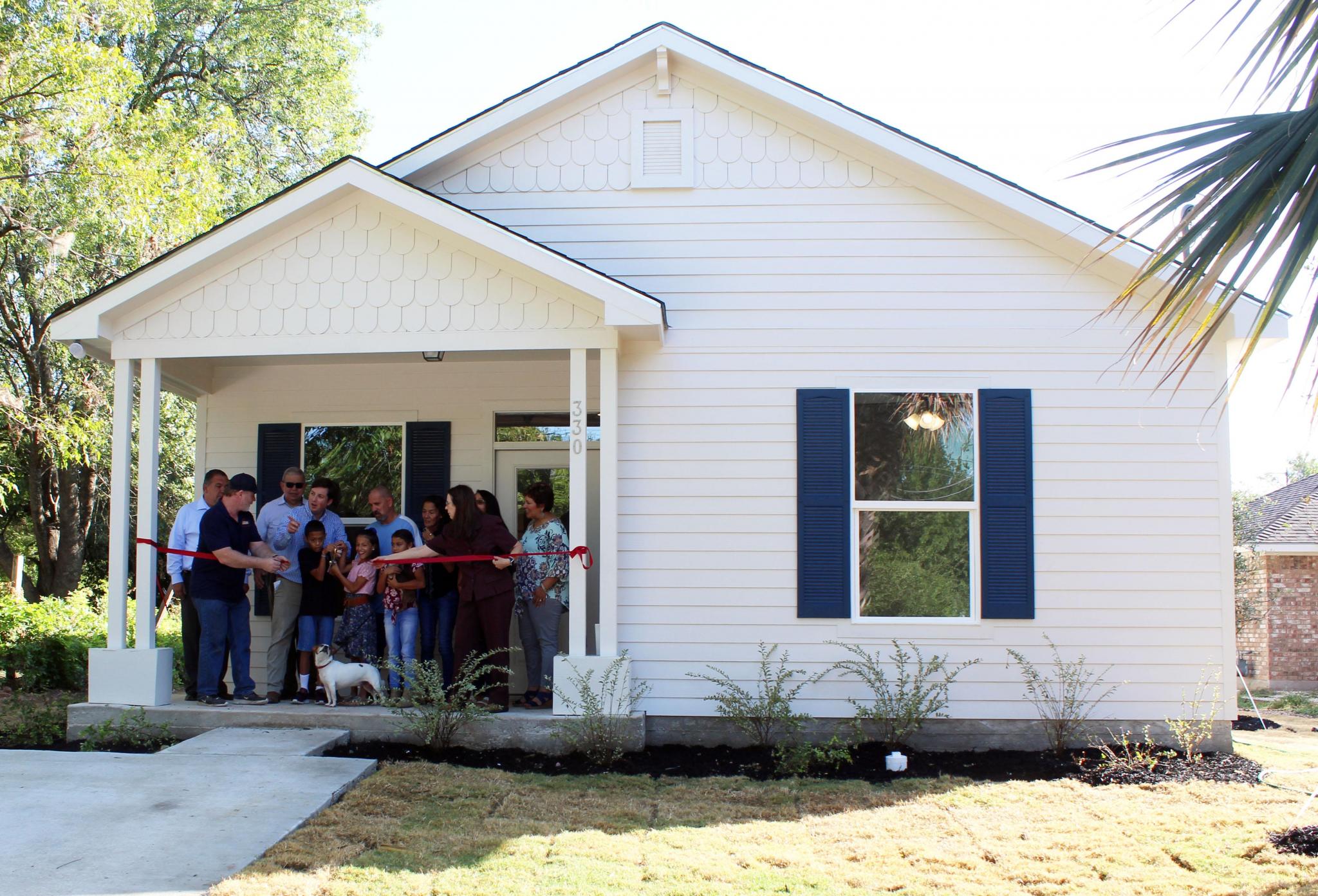 The LaFrance Family, along with city staff, Mayor Jane Hughson and builder Steve Mataro cut a ribbon in front of their new home on Thursday. Daily Record photos by Jordan Burnham

The LaFrance family received the keys to their new home this week.

Thursday morning was a special day for the family, who now have a three-bedroom, two-bathroom home outside of the floodplain to call their own. The LaFrance’s previous home, located in Blanco Gardens, was devastated by the May and October floods in 2015. With funds from a second round of funding from the U.S. Department of Housing and Urban Development Community Development Block Grant Disaster Recovery Program (CDBG-DR), the city has been able to build three houses, and city officials gathered for a ribbon-cutting for the house.

“The three homes bring the total disaster recovery assistance to a total of eight new constructions and one rehabilitation, and we have more on the horizon,” said San Marcos Mayor Jane Hughson.

Hughson said the city anticipates a third round of assistance and funding that will serve seven families impacted by the floods.

“The mission of the City’s Disaster Recovery Program is to provide safe and quality affordable housing to families who were impacted by the floods in 2015,” Hughson said. “These homes became a reality following our City Council’s approval of a program that allowed vacant city-owned lots to be used to relocate these families, all of whom were flooded twice in 2015.”

After seeing their new home, the LaFrance’s grandchildren were surprised to find new bikes in each of their rooms, a present from DSW Homes, a company that is involved in disaster recovery across the country. DSW Homes built the three new homes in San Marcos.

“It took about 30 days per house, we did three houses in the community in 90 days,” said Steve Mataro, public affairs/owner of DSW Homes. “And everybody’s been amazing, from permitting to the inspectors to everybody —the entire community that we’ve worked with coming here as a guest has embraced and taken ownership of helping these families.”

Joseph and Patricia LaFrance, along with their grandchildren and dogs now have a green energy-certified home close to a nearby park.

“Everybody worked seven days a week to bring these families home,” Mataro said.