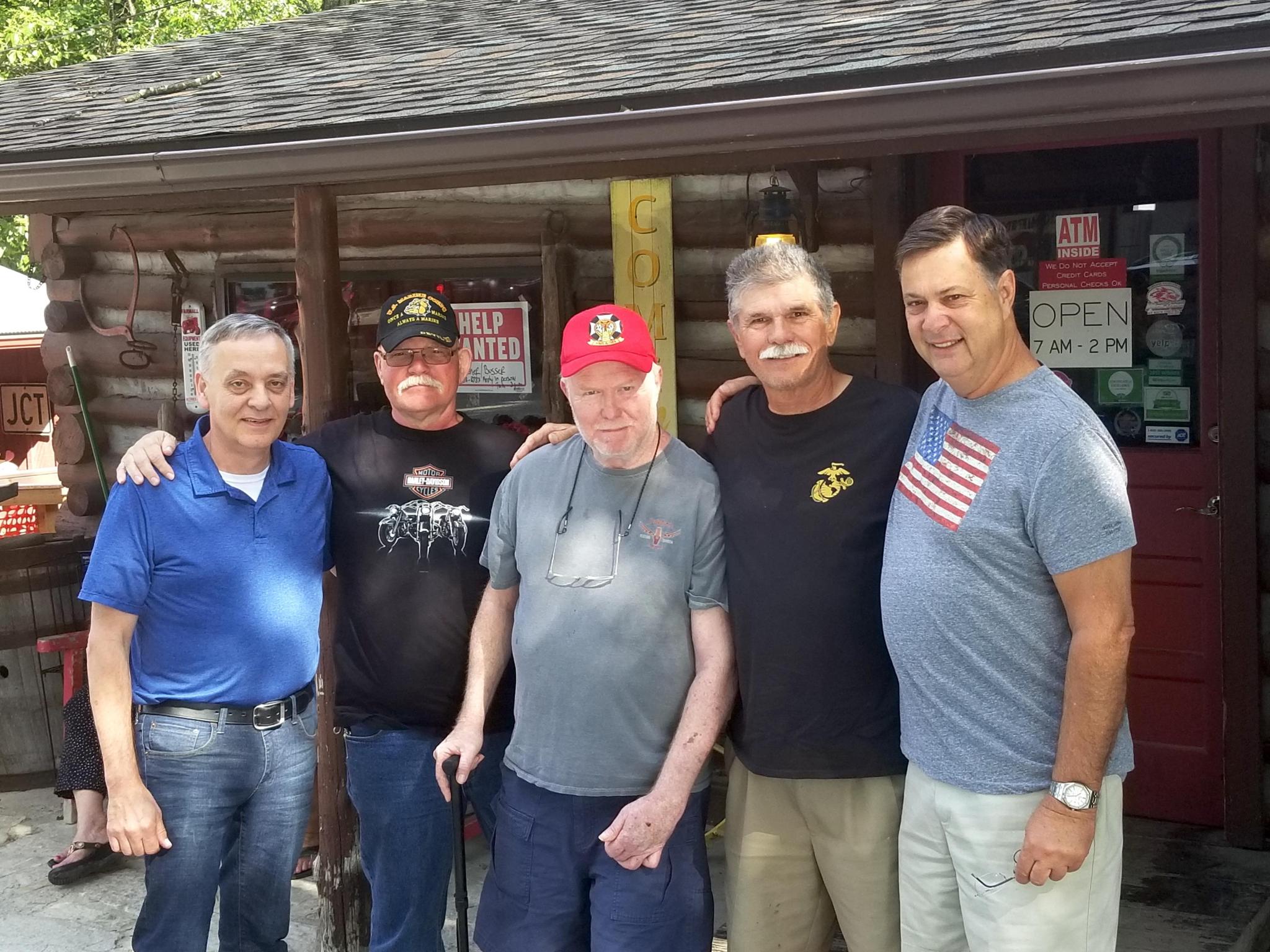 Five Marines reunite after almost a half century

Forty-one years and about 9,500 miles from when and where they last saw each other, five former U.S. Marines reunited this month in Branson, Missouri.

Len Sherard, at age 62, was the youngest of the quintet who served together in the South Pacific in the mid-’70s, and had the shortest trip – a 3-1/2 hour drive from Overlandpark, Kansas. Dan Wolf rode his Harley Davidson down from Kingston, Michigan – nine hours on the mid-west’s hottest day of the year, while Sal Bellino flew in from Briarcliff, New York.

Joining them were Bud Turner, reliant on a cane after being hit by a car left him paralyzed on his left side, who came in from San Marcos, and Joe Costa, who visits his Tulsa, Oklahoma. VA Medical Center to care for his hearing loss, and upon arriving, told his long-lost pals to, “Go get physicals!”

Back in the day, they were helicopter electronics technicians attached to Marine Helicopter Squadron HMM 165 in the Philippines, on a one-year NATO joint-force peacekeeping cruise with the Australians and British.

Bellino had stored his Marine photos in a plastic bin — others’ Kodachromes fell victim to moves over the years – and one shot of him and Turner on the Red China border prompted Bellino to tell him a story about being on shore patrol in Hong Kong on New Years in 1976. Turner replied: “I remember, I was the other guy with you.”

“We were at a burger place, and this young waitress came over and said, ‘I want to thank you for your service,’” Bellino said. “Then the manager came over and talked with us – people were genuinely interested, they really cared.”

“I just had to say goodbye to friends I haven’t seen in 45 years. One of the hardest things I’ve had to do in recent memory,” Sherard Tweeted leaving Branson. “There was a little talk about our personal lives and then we were right back there, a bunch of young kids out to explore the world, and ultimately save it if it came to that. These are the guys that had each other’s back each and every minute of each and every day. A bond like that, where we were willing to make the ultimate sacrifice, is amazing, and not to be taken lightly.”

Bellino said simply, “We all joined the ship and left at different times — in the blink of an eye, someone was gone, all off in different directions — so this was the first time we got to say goodbye to each other.”

It was Wolf’s idea for the reunion, using Facebook and togetherweserved.com to contact the former Marines. The plan is to do it again in two years, with the marching orders for each to bring along another Marine.