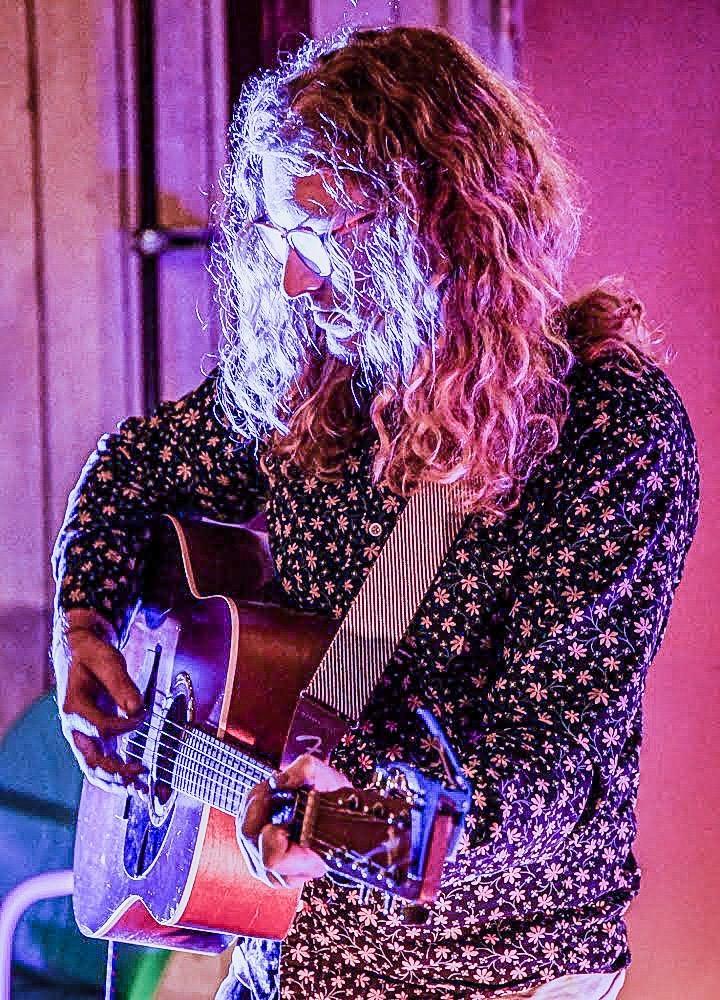 Listen San Marcos will host  Listen & Learn San Marcos! How to Book a Show Like a Pro on Tuesday, July 19 at The Porch. The event will feature a panel discussion and live music. Above, a San Marcos musician performs at Chance's R. Daily Record photo by Lance Winter

San Marcos musicians will have a chance to learn how to book shows at an upcoming educational panel and music showcase.

Listen San Marcos —  an initiative launched by Visit San Marcos which aims to elevate the city’s music scene — will host Listen & Learn San Marcos! How to Book a Show Like a Pro on Tuesday, July 19 at The Porch. The event will feature a panel discussion as well as live music.

“This is something we've been kind of wanting to do since we started the Listen San Marcos group,” said Steve Anderson, Listen San Marcos board liaison. “It was always our intention to have these kinds of networking, educational sessions for the music community. And so, this is the first one of those.”

Panelists for Tuesday’s event are Dave Sims of Headwater Audio, Sam Strahan from The Porch, and Mike Howard of Apogee Presents.

“The three of them are going to be talking about basically how to go about booking a show if you're a new upcoming musician who's just trying to get out there and play shows,” Anderson said. “How to do it the right way, not just say, ‘please let me play your venue,’ and you know what to expect … It’ll just be them talking at first then we’ll open it up to questions.”

Anderson said Listen San Marcos was developed alongside the city’s designation as a Music Friendly Community by the Texas Music Office in October 2021. Anderson added that the Learn & Listen San Marcos! events are meant to help connect musicians, venues and vendors.

“It goes a long way for the musicians in town to know the venue owners, know the people booking the shows and know that people promoting shows and everybody being on the same page,” Anderson said. “You can kind of work toward a common goal that way and so I just thought that was good. I wanted the networking side of things for sure, and then it just made sense, ‘Hey, if we're all getting together, why not have an educational component to it as well?' And then, of course, since it's a live music group, we're going to have live music too. So, it all just kind of made sense to put them all together. We're hoping people actually see it as a good resource and come out and network and use it for what it's supposed to be.”

Tuesday’s event at The Porch marks the first Learn & Listen San Marcos! event which will be held every third Tuesday of the month.

“This will be something we're going to start doing every month,” Anderson said. “So we'll have a different panel or speaker talking about different topics. We want to cover stuff like marketing and finances, copyright. I was a musician myself for 20 plus years and I feel like in that time, I never learned any of that stuff. It's not stuff you get easy access to. There's a lot of gatekeeping involved. And so, really just opening that up to everybody and just getting everybody informed. We want our music community to be as educated and so that's what we're hoping to get out of these sessions.”

Anderson said Listen San Marcos is hoping to grow through these upcoming networking and education events.

“We're hoping to just do bigger and better things for the community, the more people that support it and get on board, the more incentive we have to keep going and keep growing,” Anderson said. “No matter what we're gonna keep promoting as best we can. So hopefully, people just understand that this is a free resource they have available and take advantage of it, take full advantage of it.”

Tuesday’s panel discussion is set to take place between 6-7 p.m. at 129. E. Hopkins St., #110. Live music by Melissa Carper — a Central Texas-based songwriter and founding member of The Carper Family, Buffalo Gals and Sad Daddy — is set for 7-8 p.m., which will include a performance by San Marcos-based songwriter and guitarist Doug Strahan.