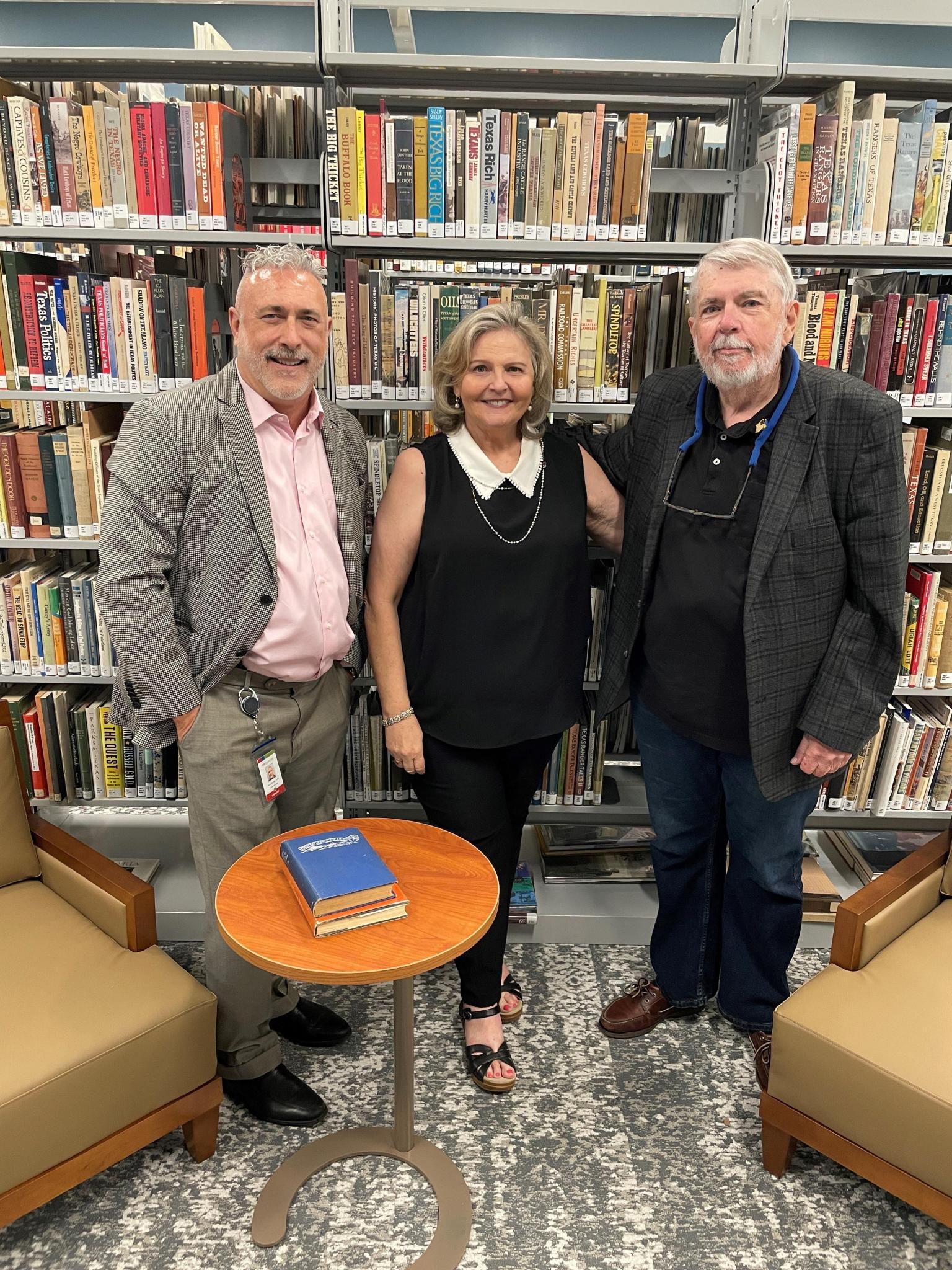 A near-lifetime of collecting Texas-related books and pamphlets was capped with the April 23 dedication of the Mike Cox Texas Collection at the San Marcos Public Library.

The dedication came five years after Cox began donating his extensive Texana collection to the library. So far, roughly 5,500 books and pamphlets have been conveyed to the library with around 1,500 more books and scores of pamphlets still to come. The collection covers most aspects of Texas history and culture, from books on ancient pictographs found in the Trans-Pecos to books on the history of the Texas Rangers to books about Texas books.

An elected member of the Texas Institute of Letters and the author of more than 35 non-fiction books, Cox began seriously looking for a forever home for his collection in 2013. While he discussed his desire to donate his books with a half-dozen or so Texas libraries, nothing worked out until he approached the San Marcos Public Library in December 2016. The same day he emailed library director Diane Insley to ask if she would be interested in his collection, she replied that she indeed was.

Since the San Marcos library is only a 30-minute drive from where he lives in Wimberley, Cox was delighted to find a place for his books close enough for him to still be able to use them for reference. He delivered the first batch of books, 900-plus titles, in January 2017.

“San Marcos is one of the fastest growing cities in the nation, so I know that my collection will be helpful to more and more researchers and family historians over the years,” Cox said. “I couldn’t be more pleased with the way the library staff values my books.”

Cox grew up around books in a family of writers, readers and history buffs. He began collecting Texana when he was in the seventh grade at what was then Lanier Junior-Senior High School in Austin. Though he initially acquired books for research purposes, by the late 1970s, he was actively collecting Texas material “just because” as well as for use as a personal reference library.

In the early 1980s it dawned on Cox that if he found a piece of Texana for sale that he recognized as being below market value, assuming he didn’t need it for his collection, he should acquire it for resale. In the fall of 1983, he and the late Austin book dealer Tom Munnerlyn opened State House Books on South Congress Avenue. While Munnerlyn later bought out his interest in the store, Cox continued to sell used and rare books by mail-order catalogs and at book and paper shows across the state. He also continued to build his personal library, visiting used and antiquarian bookstores from coast to coast as well as Europe.

Dr. Arro Smith, the San Marcos library’s Technical Services Division Manager — and curator of the Cox Collection — said at the dedication that 25 percent of the donated books are uncommon and that 2% are bibliographically unknown. All, he said, are in excellent condition and are titles that will be useful to researchers.

The collection is open to researchers by appointment, but due to their value and in some instances, scarcity, the books cannot be checked out.

“Giving away most of my books has not been easy,” Cox said, “but most collectors are only slightly less fearful of seeing their collection broken up in an estate sale or auction than they are of death. I couldn’t be happier over the relationship I have with the San Marcos library.”

Cox said at the dedication that he’ll keep collecting as long as he’s able to move around inside a bookstore, antique mall or museum. But from now on, he added, if he finds something that’s not already in his San Marcos collection, he’ll be buying it for the library.