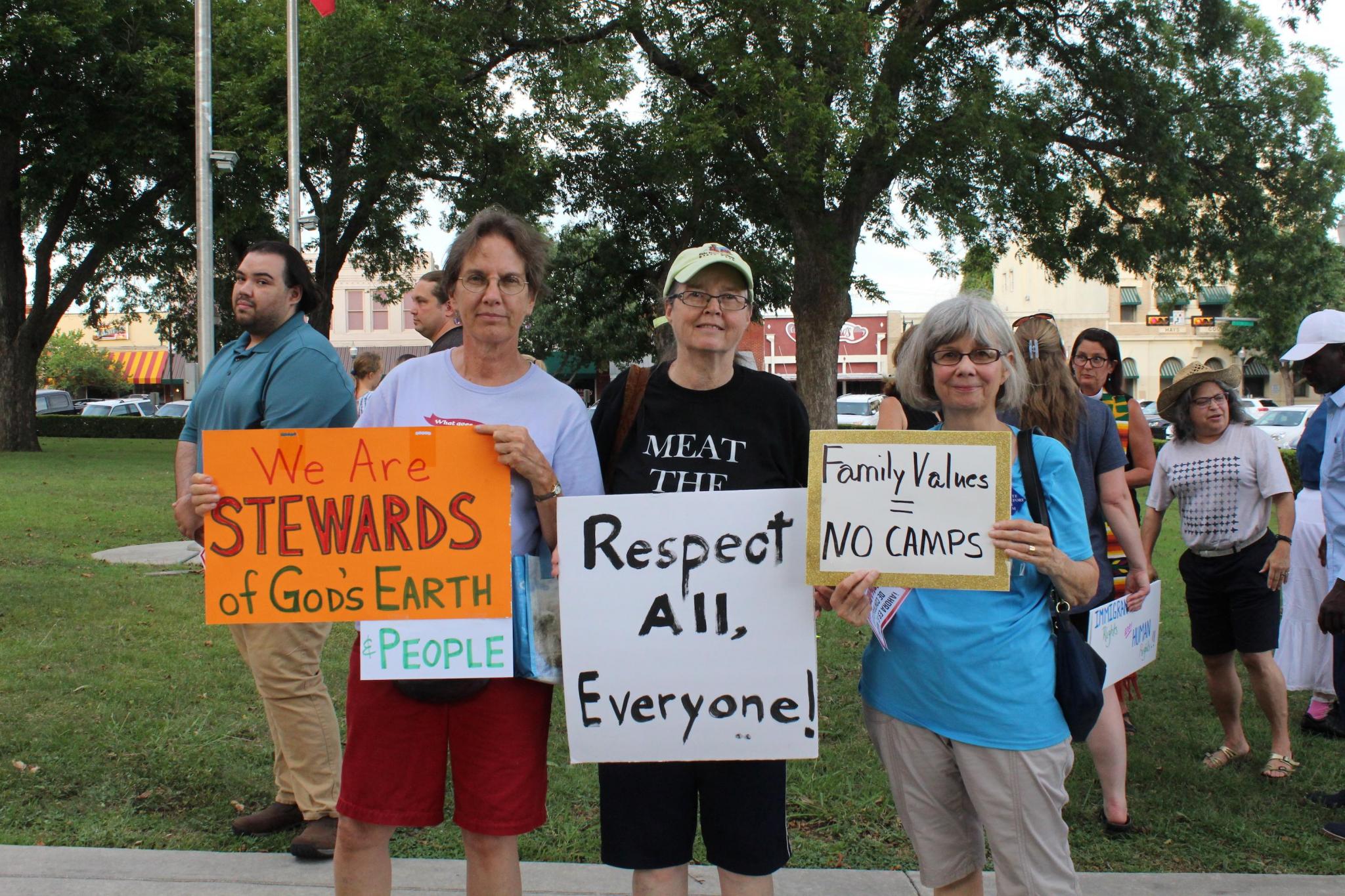 A hymn rang through the lawn of the Hays County Historic Courthouse as voices resonated together with the words “Through many dangers, toils and snares have we already come. T’was grace that brought us safe this far, and grace will lead us home.” This time, the voices did not sing to rejoice, but to grieve the conditions that pervade detention centers along the border and around the nation.

On Friday evening, community members gathered at a vigil hosted by Mano Amiga and local clergy as part of the Lights for Liberty international day of action, which called for an end detention camps at the border.

“We are here today on July 12 as one of thousands of vigils occurring internationally to grieve with those currently held in migrant concentration camps scattered across the country and for those lost to the inhumane conditions of these camps,” said Tomas Diaz de Leon, an organizer with Mano Amiga. “We are also here to demand that these camps be closed.” 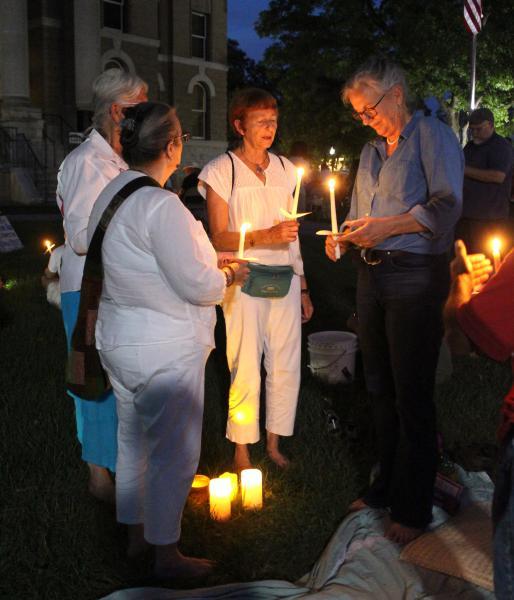 Diaz de Leon said the existence of the Karnes County detention center, about 72 miles from San Marcos, has gone largely unchallenged. He said members of the San Marcos-area community have been taken to the South Texas Detention Center in Pearsall, 104 miles away and the T. Don Hutto Residential Center in Taylor, another 72 miles away.

“It’s time to map out how those assembled here can be part of a movement and regular, active opposition to these camps,” De-Leon said.

The Reverend Tim Bauerkemper, Pastor at First Lutheran Church San Marcos, along with six other clergy members read 21 verses from the Bible regarding treatment of immigrants. Following each verse, the crowd responded with the words “who is our neighbor.” After the call and response, Rev. Dr. Helen Boursier of the Presbyterian Church shared some of the lessons she learned while spending time with refugee families seeking asylum since 2014.

Boursier said that the vast majority of individuals seeking asylum are fleeing gang-related violence and gross underemployment in Guatemala, El Salvador and Honduras.

“This is our connection to this community of people that are now coming to our border fleeing the problems that we contributed to,” Boursier said. “We have a moral and also a legal responsibility for the UNHCR, the United Nations High Commission on Refugees, to say bienvenidos, welcome, may it be so.” 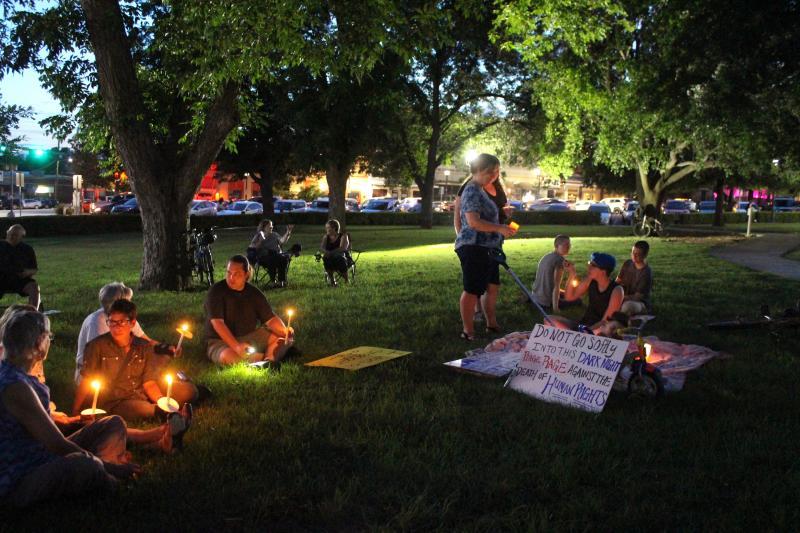 Community members gathered in small groups to discuss what they can do to end the situation occurring at the border.

Shannon FitzPatrick, former Attorney for Students at Texas State University, who spent her time volunteering at Texas prisons, said what is happening at the border is reflected in the prison system today. In Texas, over 140,000 individuals are incarcerated, including children, which is higher than the national average and costs the State $3 billion a year, according to Fitzpatrick. Additionally, she said the rate of incarceration for black women is double that of white women, and for Hispanic women, the rate of incarceration is 1.3 times more than white women.

“There are a lot of parallels between what we see at the border and what is happening in our prisons today because what we’ve allowed in our prison system,” FitzPatrick said. 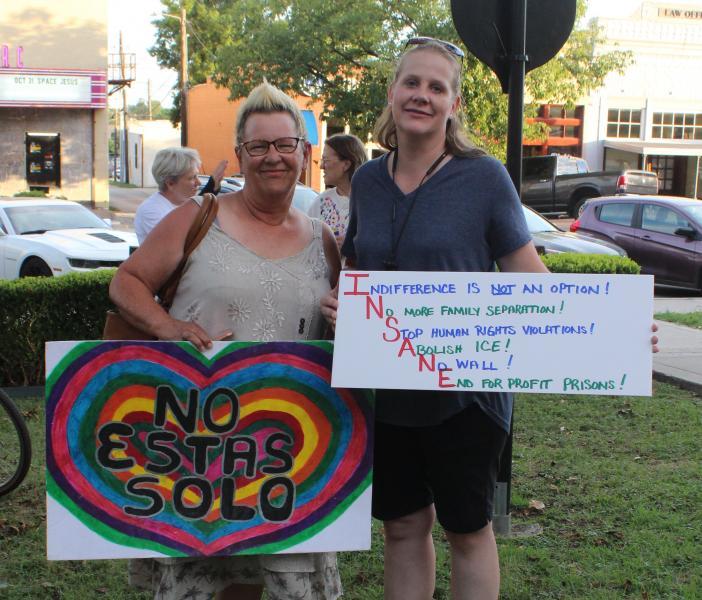 Cat Yuracka and Mikki Coles hold signs they made for the vigil against migrant camps.

City Council member Lisa Prewitt said she attended the vigil in order to be more informed from people who are actually visiting the detention camps.

“I’m hoping that all of us who leave here tonight, if we can’t make the trips, that we help the people who are making the trips to help the mothers and the fathers and the children,” Prewitt said, “And, you know, understanding why they’ve come here. They aren’t coming here and risking everything because they have a decent life where they’re at.”