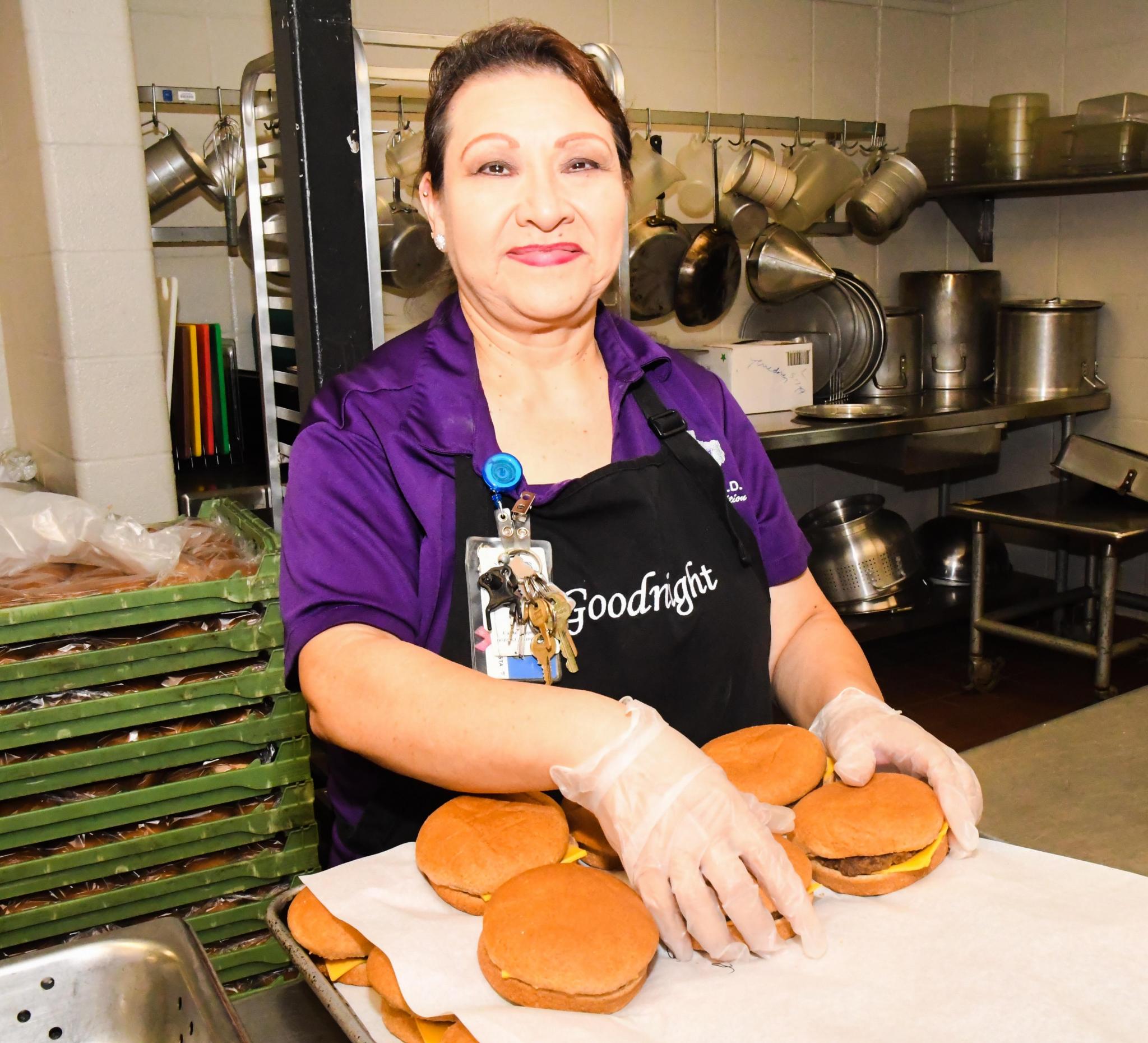 Laurie Garcia, who says she loves her job, has worked for SMCISD for the past 13 years. Daily Record photos by Lance Winter

This summer, youth can step inside of a bright yellow school bus and receive a free, well-balanced lunch delivered to four locations across San Marcos.

SMCISD’s summer nutrition program offers free meals to youth age 18 years and younger at various cafeterias across the city. However, many youth are not able to find transportation to these locations; instead, SMCISD Mobile Meals is bringing a cafeteria to the city so that every young person has the opportunity to eat a free meal this summer.

After the generator on its purple bus failed, SMCISD Mobile Meals bought a new bus, which will be ready to operate next summer. For the duration of this summer, the program has converted a regular yellow school bus into a mobile cafeteria, where youth can find a free lunch Monday through Friday. The bus delivers meals to Morning Wood Neighborhood at 10:30 a.m., Regency Mobile Home Park at 11:15 a.m., Encino Pointe Apartments at 12 p.m. and Sienna Pointe Apartments at 12:40 p.m.

Mike Boone, director of SMCISD’s Child Nutrition Program, said the program feeds 15 to 25 youth at each site, totaling 60 to 100 meals per day. He said that across all locations, stationary and mobile, the summer nutrition program’s peak day in 2019 fed around 1,500 individuals.

With a district comprised of 74% economically disadvantaged children, according to Boone, a need arose for those students who could not obtain transportation to schools throughout the summer. Boone said the bus initially began to take meals to Morningwood Neighborhood, which is a 15 minute drive from most schools. Now, the temporary bus brings lunch to four locations. Staff pass out lunch, which youth are required to consume on the bus, and parents or guardians are welcome to purchase a meal for $3.50.

“As long as the kids are getting fed that’s all that counts,” Boone said.

According to Boone, the majority of his staff is comprised of mothers, grandmothers, aunts and fathers who have a passion for child nutrition.

“They work extremely hard for not a whole lot of money but they take a lot of pride on giving the kids the healthiest, [nutritional] meal,” Boone said.

Boone said the district receives $35,000 - $40,000 worth of produce from the Department of Defense, which allows the district to offer a variety of fruits and veggies with each meal.

A Community Eligibility Provision program, which was implemented in the district this past school year, allows all students free breakfast and lunch. Boone said the program has helped end the stigma against free meals.

“There is no stigma of who gets free, who doesn’t,” Boone said. “There’s no more charging where it’s a big nightmare.”

Tony Mendoza, cafeteria manager and operations supervisor for SMCISD, is a line server and prep cook on the mobile meals bus for the summer. He said he is looking forward to the new bus because of its equipment and tables.

“We take pride in what we make and we’re here to serve the community,” Mendoza said.