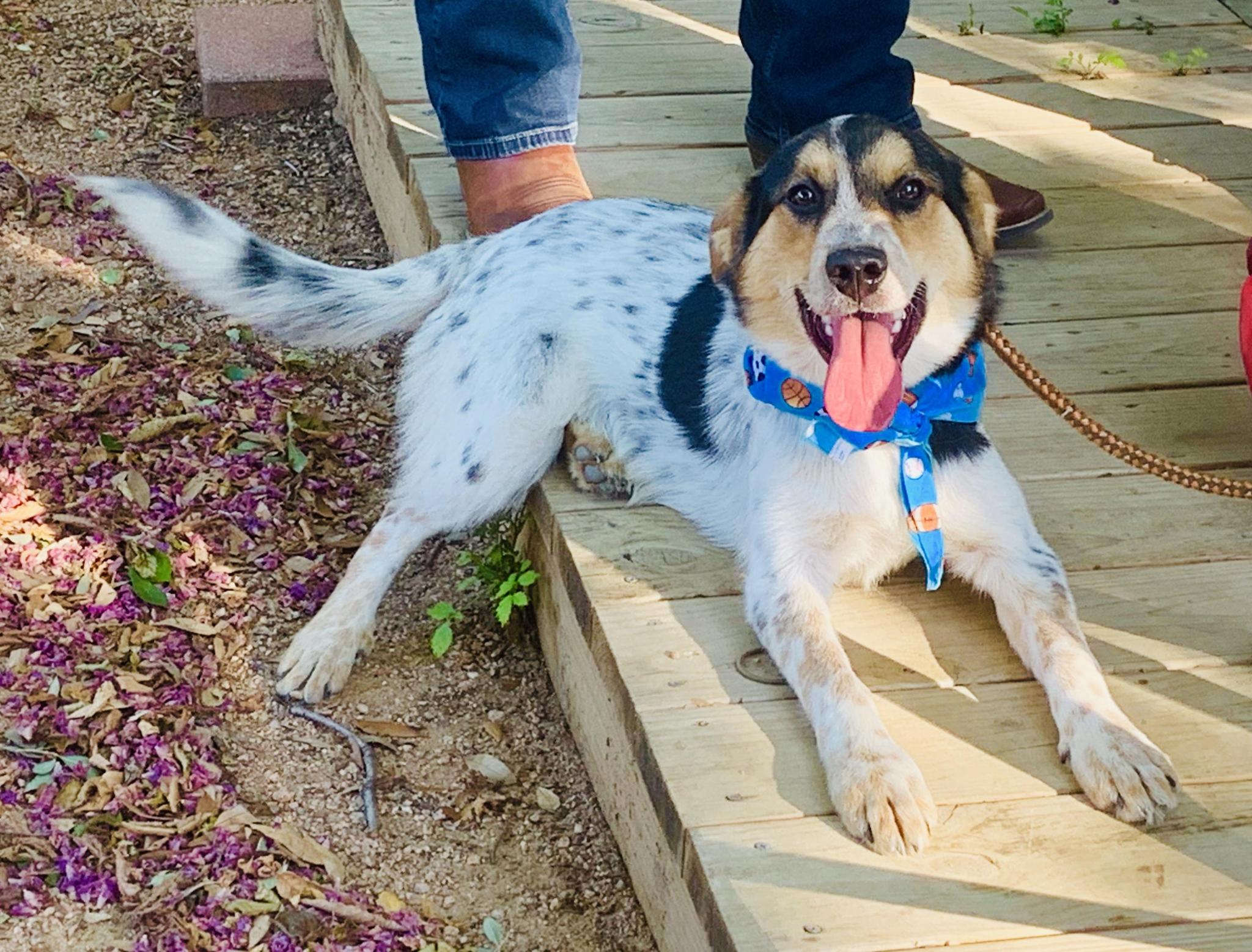 Robert, an 8-month-old shepherd mix from the San Marcos Regional Animal Shelter was adopted at The San Marcos Young Professionals' July networking event "The 'Dog' Days of Summer." The event was held at Railyard Bar & Grill and was sponsored by Matt Patterson Farmers Insurance and served as a drive for the animal shelter. Photo by Samantha Brown

The San Marcos Young Professionals hosted a BYOD  — Bring Your Own Dog — event last Thursday, but one dog attendee, Robert, wound up going home with his "furever" family.

The networking Happy Hour, sponsored by Matt Patterson Farmers Insurance, used the event to raise donations for the San Marcos Regional Animal Shelter. But in addition to attendees being able to bring their own pups, the animal shelter brought Robert, an 8-month-old shepherd mix, who was looking for a family.

San Marcos Area Chamber of Commerce Vice President of Communications and Events Samantha Brown said Robert, or Bobby, as he was being called during the Happy Hour event, was a sweet, calm dog that liked nothing more than getting pets from people as they passed.

As the event was coming to an end, the bin of donations for the animal shelter was growing fuller, but no one had stepped forward to adopt Bobby yet. That’s when Eric Litle, of Matt Patterson Farmers Insurance, started to worry that Bobby might have to return to the shelter.

“At first we were trying to get ahold of Matt Patterson for the event to see if we could get the dog as an office dog and we all take care of him there,” Litle said. “We had seven or eight of us from the agency out there and we were all looking at each other like ‘we can’t let this dog go.’”

Then the animal shelter started to pack up and, according to Litle, he and his coworker and roommate Parker Patterson, shared one more look before deciding they couldn’t let Bobby return to the shelter. And like that, Bobby went from being a dog with no family to a dog with a lot of family — four owners and four fur siblings, to be exact.

Bobby’s adoptions fees were also waived by the shelter and Brian Olson, owner of Premier Cuts Hair Salon, sweetened the pot by giving a $100 donation for pet supplies.

Bobby spent his first weekend with his family at the Blanco River swimming and cooking. He also met his new siblings — Randle and Winnie the cats and Rooster and Zach the dogs. Litle said he’s a great addition to the family.

“Young Professionals host something every month and a big part of that mission is to give back and to support the community. This fulfilled everything that San Marcos Young Professionals is about, networking and giving back,” Brown said. “But Bobby getting adopted was the cherry on top.”

The San Marcos Regional Animal Shelter is available to come to events for public outreach, adoption drives and community education. Interested organizations can fill out a request for an event on the city website.