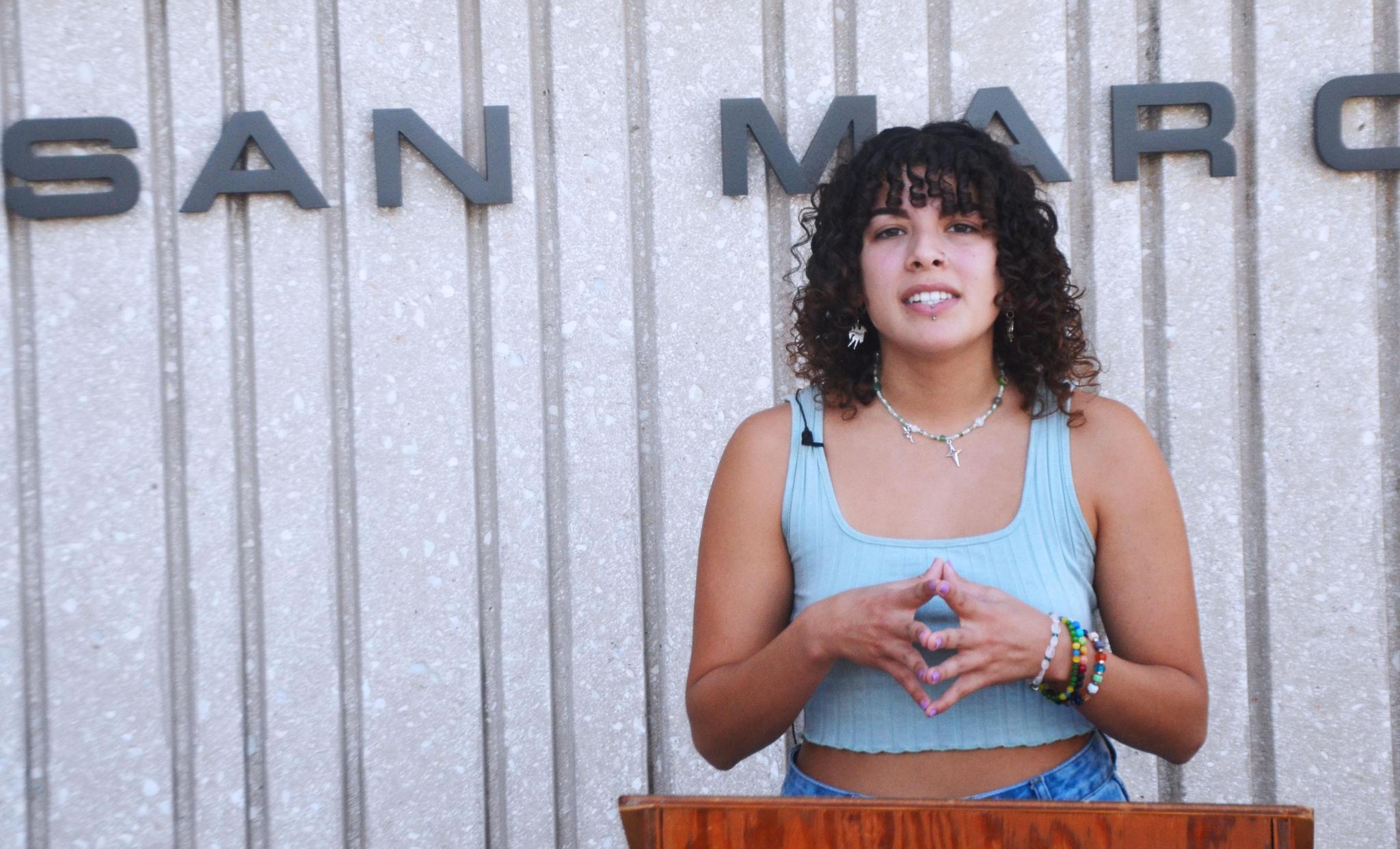 Above, Mano Amiga Communication Director Sam Benavides speaks outside San Marcos City Hall after Interim City Clerk Elizabeth Trevino certified a petition to place a measure on the November ballot to decriminalize up to 4 ounces of marijuana in the city. Daily Record photo by Nick Castillo

The effort to decriminalize marijuana in San Marcos took another step closer to appearing on the November ballot.

San Marcos Interim City Clerk Elizabeth Trevino certified a petition which would have voters decide to decriminalize marijuana up to 4 ounces in the city.

“I would say, for our team, the most nerve wracking phase of this campaign, which felt like a very make it or break it milestone, was waiting for the city clerk’s approval because now that we’ve got that, the policy will be enacted in one of two ways,” Mano Amiga Communications Director Sam Benavides said. “It will either be passed by council or it will go to the voters, which we know by having connected with voters for seven days a week while gathering these signatures that voters are very excited about it. It’s our hope that council will make the decision to send it to the ballot box this November.”

Mano Amiga, a grassroots immigration and legal reform organization, gathered 10,624 total signatures, according to a memo sent from the interim city clerk to Mayor Jane Hughson and the San Marcos City Council. Of the 10,624 signatures, 4,667 signatures were verified and 5,957 were invalid.

According to the ordinance language, citations and arrests for misdemeanor possession of marijuana of up to 4 ounces would end if the voters approved the proposition. San Marcos police, however, could cite an individual or make an arrest for Class A or Class B misdemeanor possession of marijuana if it’s a part of an investigation involving a felony-level narcotics case or the investigation of a violent felony.

Additionally, if the ordinance is passed, citations for possession of drug residue or drug paraphernalia should not be issued, a prohibition against city funds or personnel to conduct THC concentration testing would be established, and there would also be a prohibition against city police using the odor of marijuana or hemp as a probable cause for search or seizure. In a prior statement,

In a prior statement, however, Hays County District Attorney Wes Mau said it would be complicated to say “it’s legal now,” regarding the marijuana decriminalization ballot initiative. Mau said Texas law makes recreational use of cannabis illegal in the state, adding that he understands efforts in San Marcos have been described as decriminalization because the city doesn’t have the authority to amend state law. He said the state legislature is the only body that can decide to make marijuana possession legal.

Mano Amiga said it will work with Ground Game Texas — an organization that collaborates “with partners on the ground to meet voters at their doors, hear their concerns, and highlight popular issues that are on the ballot” — to register voters to cast their ballots in the November election.

“This people-powered campaign is focused on passing a transformative policy that will end tickets and arrests for low-level marijuana arrests,” Ground Game Texas Political Director Mike Siegal said. “Not only will it reduce incarceration and protect San Marcos residents from biased police enforcement, however. This campaign is also engaging young voters and infrequent voters, and helping us identify thousands of local residents who care about public policy but need to update their registration. We are excited to partner with Mano Amiga in this effort.”

With the petition’s certification, the city council will receive the certification during its upcoming meeting on Tuesday followed by a discussion to consider adding the decriminalization of marijuana to the November ballot.

San Marcos City Councilmember Alyssa Garza said she’s been following the campaign closely and added that it is the council’s duty to allow voters to approve the initiative at the ballot box.

“I have seen the incredible and unprecedented effort put forth by community members,” Garza said. “Volunteers worked in the blistering cold, pouring rain, scorching heat, and everything in between to create change. Clearly, a substantial portion of the San Marcos electorate has spoken and it is now the duty of City Council to afford voters the opportunity to approve it at the ballot box.”

“We now look to city council to make sure voters are afforded the opportunity to approve this at the ballot box,” Benavides said. “There is a timeline in which they have to put it on the ballot in time. So, we will be keeping a close eye on that and ensure that they make it in a timely manner.”