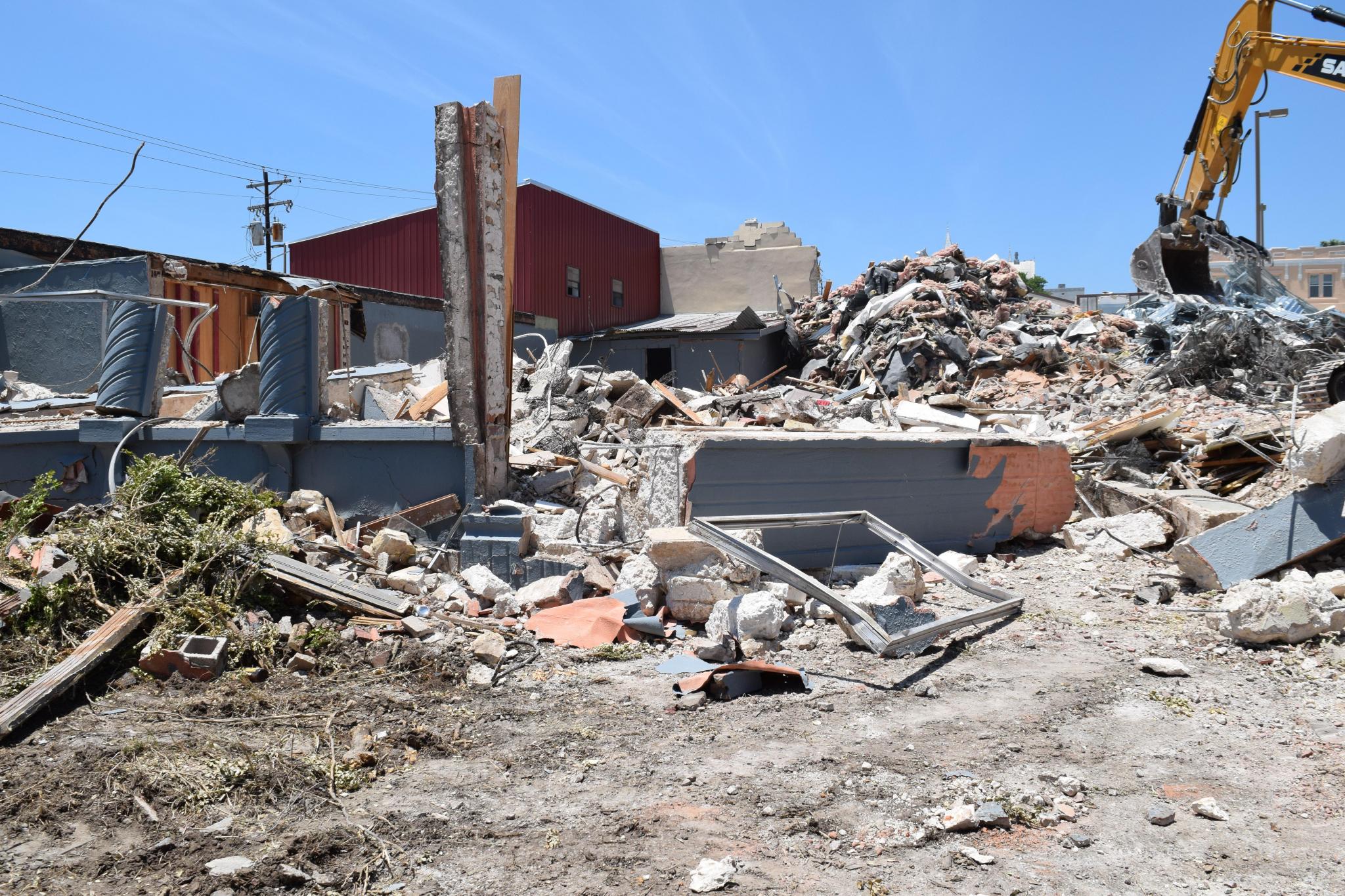 A demolition crew finished knocking down the old San Marcos Telephone Company building Wednesday. The building was constructed in 1928 and included on the National Register in 1983. It is one of several buildings being demolished to make room for San Marcos Lofts I, a $15 million multifamily development slated to have 166 units with 240 beds. Daily Record photo by Rachel Willis

On Saturday, June 15, the demolition of the historical San Marcos Telephone Building began. By the end of the day on Wednesday, June 19, the building had come down completely. Now, local preservationists are holding a funeral march and speeches to mourn the loss of the building, which was constructed in 1928 and put on the National Register of Historic Places in 1983. However, the building was not considered a local landmark. Earlier this month, San Marcos Historic Preservation Commission Chair Griffin Spell issued a statement about the demolition of the building:

Because a listing on the National Register does not hold meaning in the city’s Land Development Code, the Historic Preservation Commission was not consulted about the demolition of the building or construction around it, Spell wrote.

“What happened this week is extremely unfortunate — some would call it unconscionable,” resident and Historic Preservation Commission member Ryan Patrick Perkins said. “... People in this community are demanding accountability from all of you and from city staff that allowed this to get this far down the road that we are losing our heritage. We are losing the buildings, the neighborhoods, the communities and the people and their stories that make San Marcos unique and special and the reason why everyone wants to be here in the first place. The reason why people stay.”

“I can’t put the blame on just any one particular person or department, but I feel like as my local government, y’all have failed us by allowing the old telephone company to be demolished,” he said.

Referring to a photo that circulated on Facebook showing the first blow to the building’s roof and top floor, Saucedo said, “That is the most disgusting picture I’ve seen in my life.”

Saucedo called for the preservation of San Marcos’ history.

“I’m tired of seeing my city torn apart. I’m sick of it,” he said. “And when are y’all going to step up? Somebody pull your pants up and be a man ... or be a true woman, a pioneer woman, and stand up and fight for it.”

“It is certainly very disheartening. So in looking at the process, we as a staff, and obviously with the community, we need to work together and we need to do better,” he said. “... There needs to be a much more thorough review before it gets to the level of issuing an actual demolition permit.”

The funeral for the building will be held at 11 a.m. Saturday, starting at 128 W. San Antonio St.