The San Marcos Police Department and members of the community gathered to remember fallen officer Ken Copeland, who was killed in the line of duty on Dec. 4, 2017. Daily Record photos by Lance Winter

Wednesday marked two years since Copeland was killed in the line of duty, and Latham said he and the department wanted to take time to commemorate his life.

“You know this is the second year now that we’re going on, and what a sacrifice he made,” said Latham, who serves as SMPD’s volunteer chaplain. “So, I want to thank him and thank God for the sacrifice that he made for us. And so, we’re thinking about him today.”

Copeland was shot and killed while serving a warrant on Dec. 4, 2017. Copeland, who had been with SMPD since March 1998, was the first San Marcos officer to be killed in the line of duty.

“Two years ago was a terrible day in our history,” Interim Police Chief Bob Klett said. “We gather here today to remember him and I really appreciate seeing all the faces here. This is a family from our law enforcement agency to the surrounding agencies from the community, your support has been tremendous for all of us.” 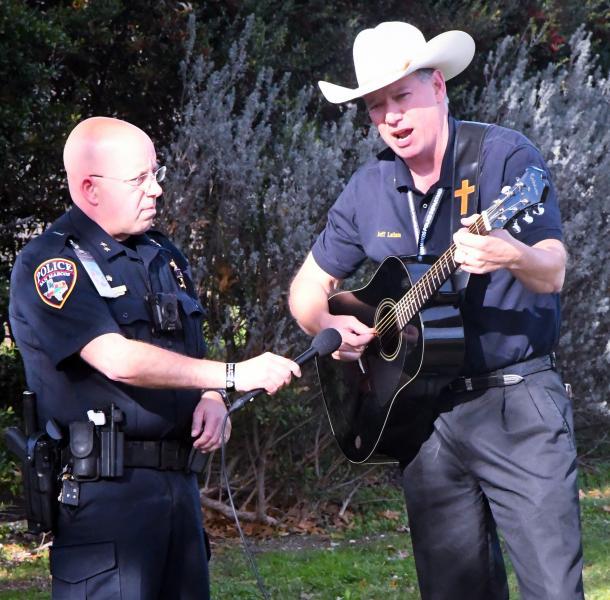 Klett described Copeland as an amazing officer, who served his community well “with joy and laughter.”

“He was the kind of person that would take a bottle of Topo Chico to a person in need and give them water and lift them up,” Klett said. “He served our kids in the scouting program in the schools. He was just that kind of person that looked for ways to enhance people’s lives and make it better. So, we made a promise to celebrate him every year.”

Klett said it’s important for the department to remember Copeland’s life every year because his dedication to helping others is what the San Marcos community desires from its  police officers.

“It’s to praise and honor a person who gave his all doing something for the community,” Klett said. “He would never expect this kind of recognition but that’s just the kind of person he was. So, we choose to remember that.”

Latham, who led Wednesday’s remembrance ceremony, said Copeland would want everyone to remember the good things and move forward.

“We need to move forward as an agency and Ken would want us to move forward,” Latham said. “He would have a great smile on his face and he would say, ‘Guys, move forward. You got to keep going. You have a duty to do and to protect and serve San Marcos.’ So, I want you to remember Ken and that great smile that he had, that bald head, you know, that was always shining. He was such a great guy to hang around. And man, we miss him and we love him.”