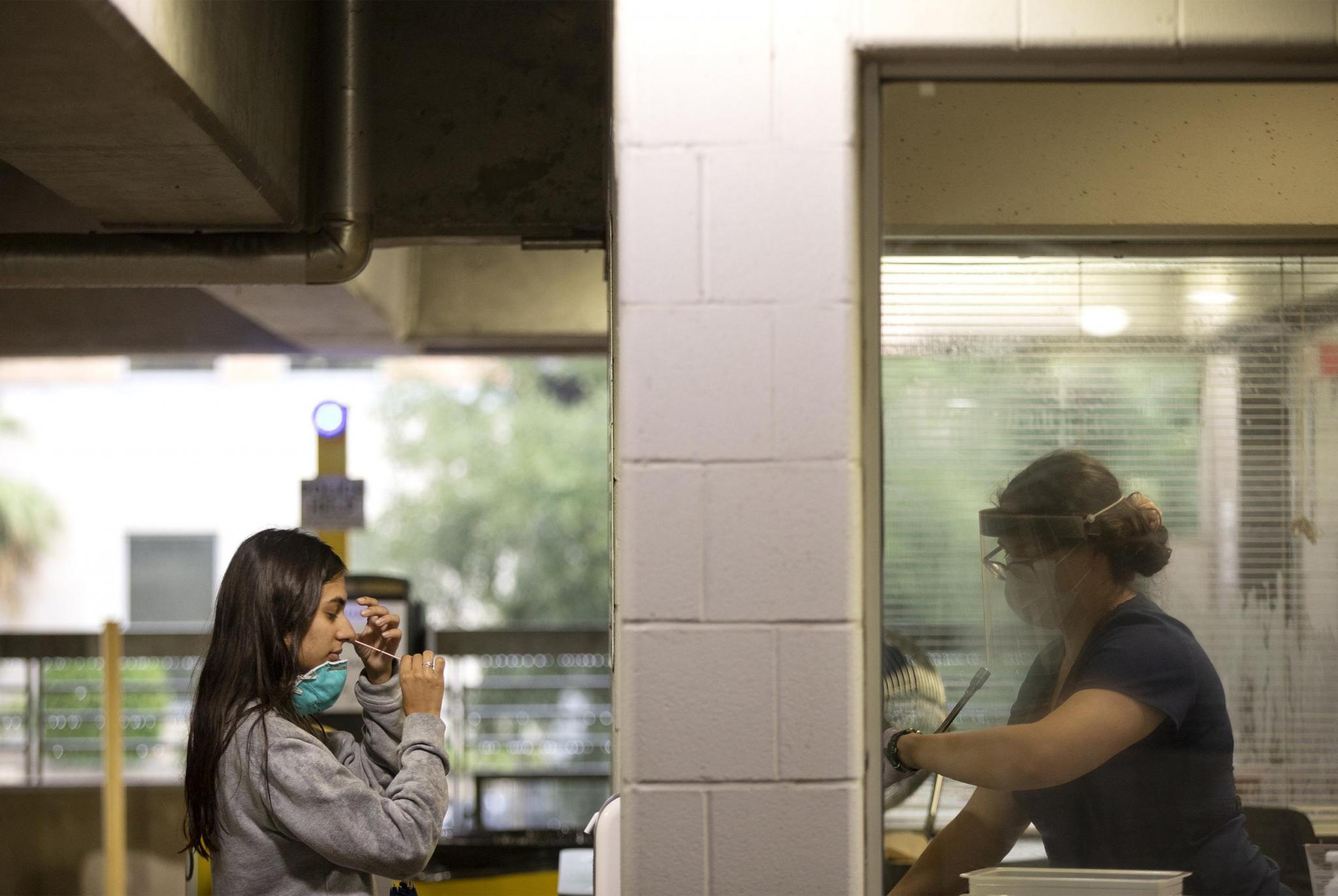 The percentage of positive COVID-19 tests in May as Texas reopened was higher than previously reported, according new changes in the way the state calculates the positivity rate. Credit: Miguel Gutierrez Jr./The Texas Tribune

State health officials published new data this week that showed the state’s positivity rate was higher in the spring than originally disclosed, even as public officials cited the data to justify business reopenings during the pandemic.

The Department of State Health Services on Monday announced a new method for calculating the positivity rate, or the proportion of positive tests, and conceded the previous method obscured the extent of viral transmission by combining old and new cases. The new formula relies on the date a coronavirus test was administered, rather than the date it was reported to health officials and verified as a case.

As Texas prepared for the first phase of reopening in late April, Gov. Greg Abbott repeatedly pointed to the state’s positivity rate, even as the number of new cases and deaths continued to rise. Announcing his initial reopening order on April 27, Abbott declared that the "COVID-19 infection rate has been on the decline over the past 17 days."

The following week, the governor downplayed a new single-day record in new COVID-19 cases by again pointing to the positivity rate.

“Despite concentrating on areas where we think there may be a high level or number of people who could test positive, the fact remains that more than 95% of the people who were tested test negative," Abbott said during a May 5 news conference.

State data at the time placed the seven-day average positivity rate at 5.84%, near the 5% benchmark recommended by the World Health Organization before governments ease restrictions. The actual rate, however, was higher. According to the new method employed by DSHS, Texas’ seven-day average positivity rate was actually 8.4%, near the 10% threshold Abbott had called a “warning flag” indicating a high level of community spread.

Following the reopening of bars, restaurants, stores and child care centers throughout May, Texas saw a surge in cases beginning in June. The state’s reported seven-day average positivity rate under the old method jumped from 4.27% at its lowest point in late May to 17.4% at its peak in mid-July. After revising the data, the state’s new chart shows that the positivity rate jumped from 5.81% in May to a peak of 21% in early July.

On June 26, Abbott ordered bars to close again and mandated that Texans wear face masks in public spaces. The state’s official positivity rate that day was 13.7%; the new data shows it was actually 18.5%.

Abbott’s office did not respond to multiple requests for comment.

DSHS’s technology has struggled to keep up with the volume of tests reported to the agency, resulting in large backlogs that distort the data. In August, DSHS reported some 350,000 new test results that had been bottlenecked because the state could not process enough tests per day before a system upgrade on Aug. 1, resulting in an artificially inflated spike. Just Sunday, officials reported another 205,000 test results had accumulated as far back as March and belatedly added another 21,336 positive cases.

Public health experts say discrepancies in key metrics, such as the positivity rate, made it difficult for officials to make informed policy decisions.

“If you calculate it the old way – the incorrect way – what happens is when the pandemic is growing, because of the lag, the positivity rate will be less than the reality,” said Rajesh Nandy, associate professor of biostatistics and epidemiology at the University of North Texas Health Science Center at Fort Worth. “That causes a problem because when we realize there might be another surge, it’s already too late. And that’s what happened in June.”

Nandy added that the positivity rate in June was “grossly underestimated.”

“You have to understand the data and the particular limitations surrounding it,” said Angela Clendenin, instructional assistant professor of epidemiology and biostatistics at the Texas A&M School of Public Health. “We are dealing with a disease that we knew nothing about.”

Catherine Troisi, an infectious disease epidemiologist at UT Health School of Public Health in Houston, said the state’s new method of calculating the positivity rate will give a more accurate picture of how active the virus remains in Texas communities. But, she said, that’s dependent on ensuring the state is testing the right people — those experiencing symptoms and people who have come into contact with them.

“People who should be tested are not coming,” Troisi said.

Texas consistently logged more than 60,000 tests per day in July, according to state data, but that has dropped off to around 40,000 to 50,000 per day in September. As students return to schools and universities, which can become new hot spots for the virus, accurate testing is imperative, she said.

Disclosure: The University of North Texas, Texas A&M University and UT Health have been financial supporters of The Texas Tribune, a nonprofit, nonpartisan news organization that is funded in part by donations from members, foundations and corporate sponsors. Financial supporters play no role in the Tribune's journalism. Find a complete list of them here.

The original article is located at https://www.texastribune.org/2020/09/16/texas-coronavirus-positivity-rate-data-method/.