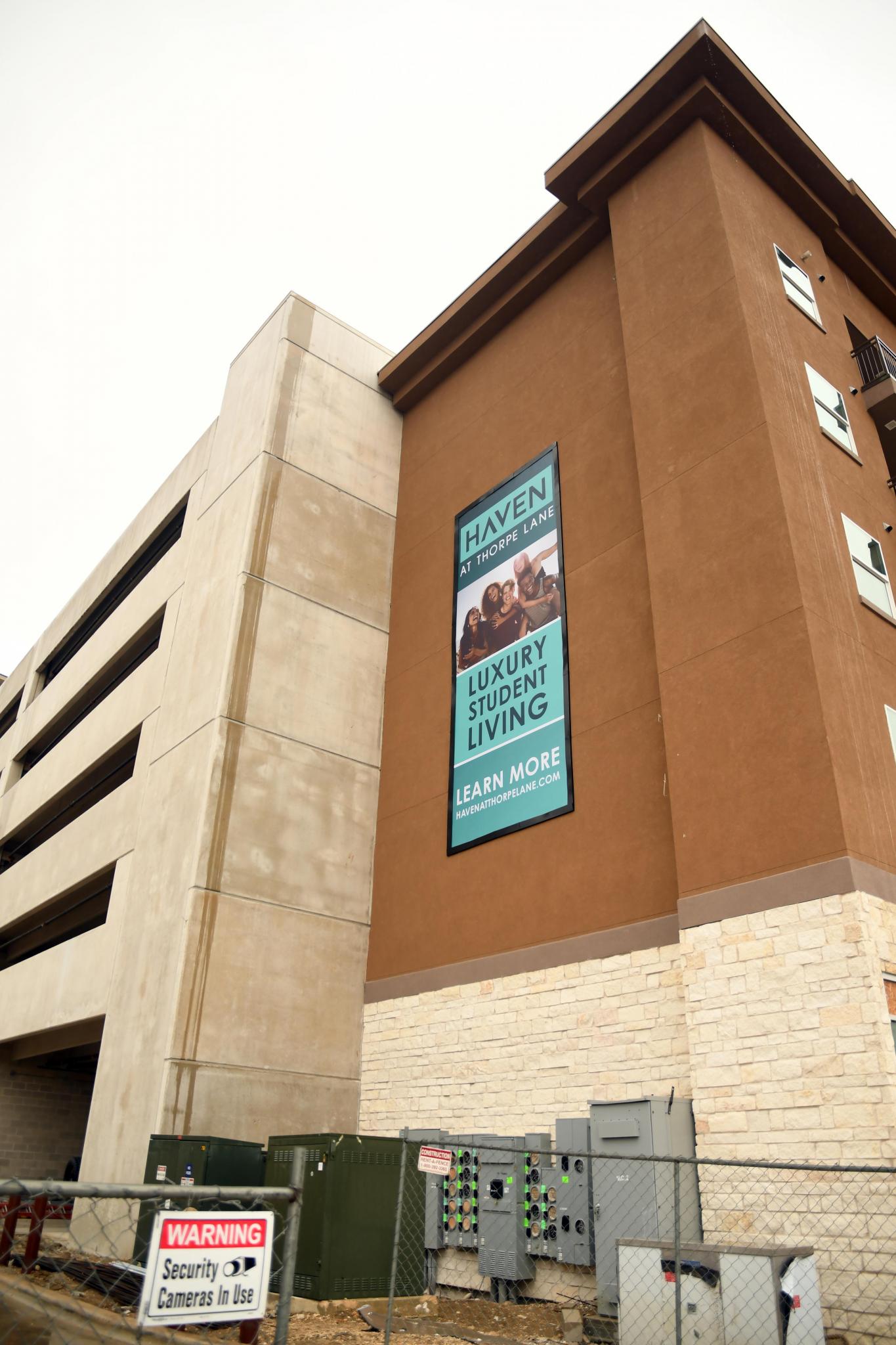 A sign at Haven at Thorpe Lane advertises living at the apartment, which was originally scheduled to open in August but has yet to complete construction. Daily Record photos by Lance Winter

Nick Hassig was supposed to move into Haven on Thorpe Lane in August. Three months later, he’s still displaced and the apartment complex remains under construction.

Hassig is one of many individuals who were affected by the postponement.

The new student housing development, located at 1351 Thorpe Lane, began leasing before completion, leaving tenants who signed a lease without the home they anticipated.

Nick Hassig, an employee of Hays County, said he signed a lease in April for a move-in date of Aug. 1. The apartment complex then pushed the move-in date to mid August.

“Needless to say, that didn’t happen either,” Hassig said. “And so although they’ve been sending us update emails about how the construction is proceeding, that doesn’t mean a whole lot to me, right? … I don’t understand what a lot of the contractor’s construction terminology means. I just do know that it is still not completed, we still don’t have a move-in date.”

A representative of Haven said the apartment complex will be ready for residents to move in “November of 2019,” and cited “construction delays” as the reason for the postponement. However, information from the City of San Marcos’ permitting department suggests otherwise.

“The city cannot speak to the contractor’s schedule but from the city’s perspective the building is still lacking complete permanent power and final inspections and it is unlikely that construction will be at a stage to allow Temporary Certificate of Occupancy until late 2019/early 2020,” the city said in an email.

Hassig was able to find a temporary apartment offering month-to-month rent since — according to Hassig — Haven offered tenants two options: be placed in housing by Haven and not receive free rent, or let tenants find their own housing and receive several months of rent for free when Haven officially opens.

“It seemed like a better option to take free rent, which — had they opened, you know, in September — it would have been a great option,” Hassig said. “But now I think that it’s probably not the right one.”

Mark Evans, director of public relations for Threshold Agency, told the Daily Record in an email that tenants were given two options following the apartment complex’s delayed opening.

Hassig said he was finally able to speak with the general manager of the property last week, who told Hassig he would not be able to get out of the lease due to a clause in the agreement.

“The most important thing he told me was that we’re not allowed to break the lease, there’s a clause in the lease that states that they’re not responsible for construction delays,” Hassig said.

“So the only way I could get out of that lease, according to him, is if I notify the property that I don’t want that lease anymore, they will try to find a new tenant to move into that apartment and if they do that tenant will take over the lease for me.”

Viviana Alba said her niece chose to have alternative housing arranged by the management team, and was placed in what Alba describes as a “crappy, crappy apartment” that is co-ed and not student housing.

“All summer they’ve been taking reservations and, you know, processing applications for who knows how long to get into these apartments that are supposedly going to be built and be ready and they’re not,” Alba said. “I mean, how can you put so much marketing dollars at the beginning and then fall so flat?” 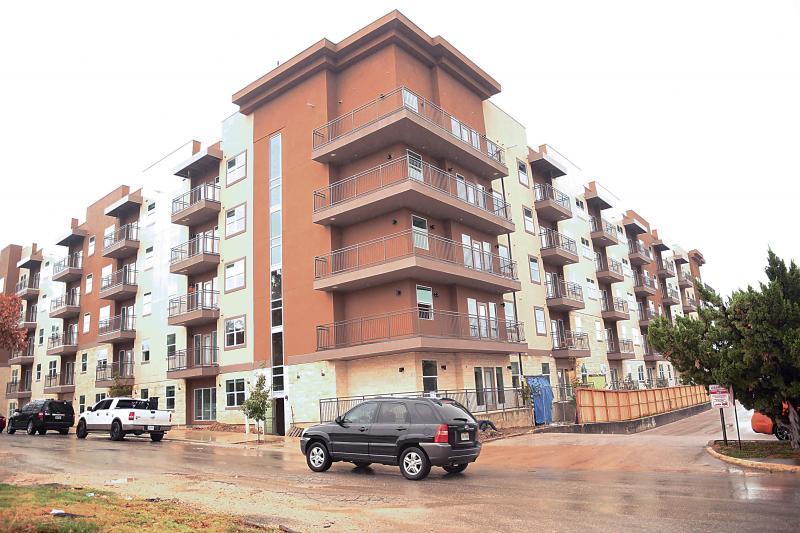 Work continues to be done to finish Haven on Thorpe Lane. An apartment representative said the complex will open in November but according to the city permitting department that date is unlikely

Haven at Thorpe Lane is not alone

Haven at Thorpe Lane isn’t the only student housing to have experienced problems. On Sept. 20, Vie Lofts — an apartment building located at 817 Chestnut St. — was evacuated in response to safety concerns about building stability and means of egress.

Vie Lofts, originally Chestnut Street Lofts, then Eight17 Lofts and Ella Lofts, was supposed to open in 2016 as Ella Lofts, but failed to do so and displaced residents for a stretch of time. In response to the delay, the San Marcos City Council passed Ordinance No. 2017-58, which  requires landlords and developers of student housing to accommodate tenants if housing units are not completed in time.

The ordinance states that building owners must provide tenants who leased units prior to a certificate of occupancy being issued with “temporary alternate, safe, decent and sanitary housing in the city or within 7 miles of the apartments at no additional cost; or of being released from the lease with no financial penalty and deposit reimbursements within 10 days.”

When asked whether the ordinance was fulfilled, Evans said, “Yes, no one was ever penalized for canceling, and we provided housing (at no charge) to anyone who took that option.”

“Cheatham Street Flats has one of the earliest move in dates in the city! Sign your lease with us and move into your apartment August 1st!,” the apartment said in a Facebook post on Feb. 4, 2019.

When it comes to Haven, parents and tenants have expressed their grievances about the postponement, and a closed Facebook page called “Haven on Thorpe is a Joke!!!” has attracted 158 members.

A mother whose daughter signed a lease at Haven at M in Huntsville said in a post on the page that she is experiencing the exact same situation in Huntsville.

Evans said that Haven agrees with the frustration.

“We provide updates on construction progress as regularly as possible,” Evans said in an email. “We completely agree with the frustration and are doing our best to assist the future residents while the construction team completes the project.”