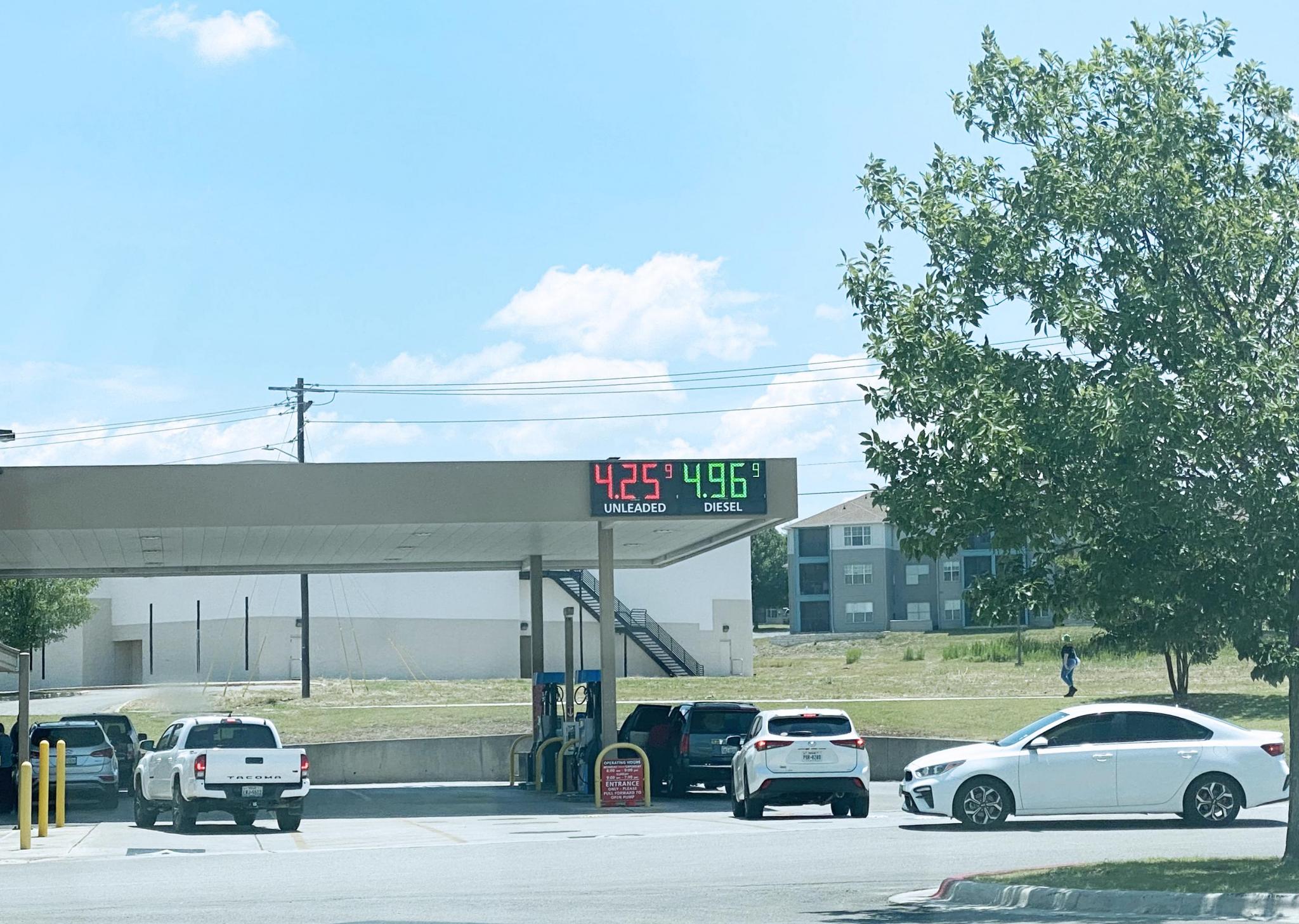 Above, San Marcans fuel up ahead of the Fourth of July weekend. Gas prices have fallen for the second straight week to an average of $4.52 per gallon of unleaded fuel in the San Marcos/Austin area, per AAA Texas. Daily Record photo by Nick Castillo

Texans expected to travel in record numbers this weekend

A record number of Texans will hit the road this Fourth of July weekend, according to AAA Texas.

An estimated 3.1 million Texans will travel by car during the holiday weekend with a total of 3.5 million Texans expected to travel for Independence Day. AAA Texas said increase in traffic volume due to pent up demand for travel will put more pressure on demand for fuel.

Drivers in the San Marcos/Austin area are paying 11 cents less per gallon of unleaded fuel compared to last week at $4.52. The statewide gas price average is $4.49 for a gallon of regular unleaded fuel — 11 cents less than last week but $1.69 more per gallon than this time last year. AAA Texas warned that although there’s been a slight drop in gas prices, it is possible that the cost could reverse course and begin climbing in July.

“Record holiday gas prices won’t stop many Texans from traveling by car this Independence Day weekend,” AAA Texas spokesperson Daniel Armbruster said. “AAA forecasts that 3.1 million Texans will travel by automobile to their holiday destination. That will be the most Texans on record to drive for July 4th and will put more pressure on fuel demand that could result in higher gas prices in the weeks to come.”

Nationwide, gas prices have declined for the second straight week with the national average falling 8.8 cents to  $4.88, according to GasBuddy — a travel and navigation app that is used to save money on gas.

“The good news is we could also see a third straight week of decline,” said Patrick De Haan, head of petroleum analysis at GasBuddy. “While prices will be at their highest July 4th level ever, they’ll have fallen close to 20 cents since our peak in early June. Motorists should be wary that while the decline could continue for the week ahead, any sudden jolts to supply could quickly cause a turnaround, and risk remains that when the peak of hurricane season arrives, we could see a super spike at the pump.”

DPS to increase enforcement during Fourth of July holiday weekend

“Our nation’s freedom is something worth celebrating, and I encourage everyone to do it in a responsible way,” DPS Director Steven McCraw said. “This includes being mindful of our state’s traffic laws and being courteous of other drivers on the roads, so everyone can have a good holiday.”

Operation Holiday, which will run Saturday-Monday, will target drivers who violate traffic laws, including speeding, not wearing a seatbelt or driving while intoxicated.

DPS said there were 55,776 citations and warnings issued during the 2021 Operation Holiday campaign. Citations and warnings included 17,376 for speeding; 2,006 for people driving without seatbelts or child safety seats; and 1,632 people driving without insurance. DPS added that 298 people were arrested for driving while intoxicated, 280 felony arrests and 145 fugitive arrests.

Operation CARE (Crash Awareness Reduction Effort) is set to start on Friday and will stretch through Monday. The campaign aims to reduce crashes and violations of the state’s Move Over, Slow Down law. DPS said there were 4,135 Move Over, Slow Down violations between Jan. 1-June 7, 2022. DPS added that the law requires all drivers to slow down when police, fire, EMS, Texas Department of Transportation vehicles and tow trucks are stopped on the side of the road with their emergency lights activated.

DPS offers the following safety tips for people driving during the Fourth of July holiday:

•Move Over or Slow Down for police, fire, EMS, TxDOT vehicles and tow trucks stopped on the side of the road with emergency lights activated.

• Buckle up everyone in the vehicle.

•Eliminate distractions while driving, including the use of mobile devices. Texas law prohibits the use of portable wireless devices to read, write or send an electronic message unless the vehicle is stopped. If you’re using a navigation device or app, have a passenger operate it so you can keep your eyes on the road.

•Don’t cut in front of large trucks, and try not to brake quickly in front of them. They can’t maneuver as easily as passenger vehicles and pickup trucks.

•If you can Steer It, Clear It: If you are involved in a non-injury crash and your vehicle can be moved, clear the traffic lanes to minimize traffic impact. Leaving vehicles in a traffic lane increases traffic congestion and leaves those involved with an increased risk of harm or a secondary wreck. On some highways, if you don’t move your vehicle when it’s safe to do so, it’s against the law.

•Keep the Texas Roadside Assistance number stored in your phone. Dial 1-800-525-5555 for any type of assistance. The number can also be found on the back of a Texas Driver License.

•Check your vehicle to make sure it is properly maintained and always ensure your cargo is secure.

• Report road hazards or anything suspicious to the nearest law enforcement agency.