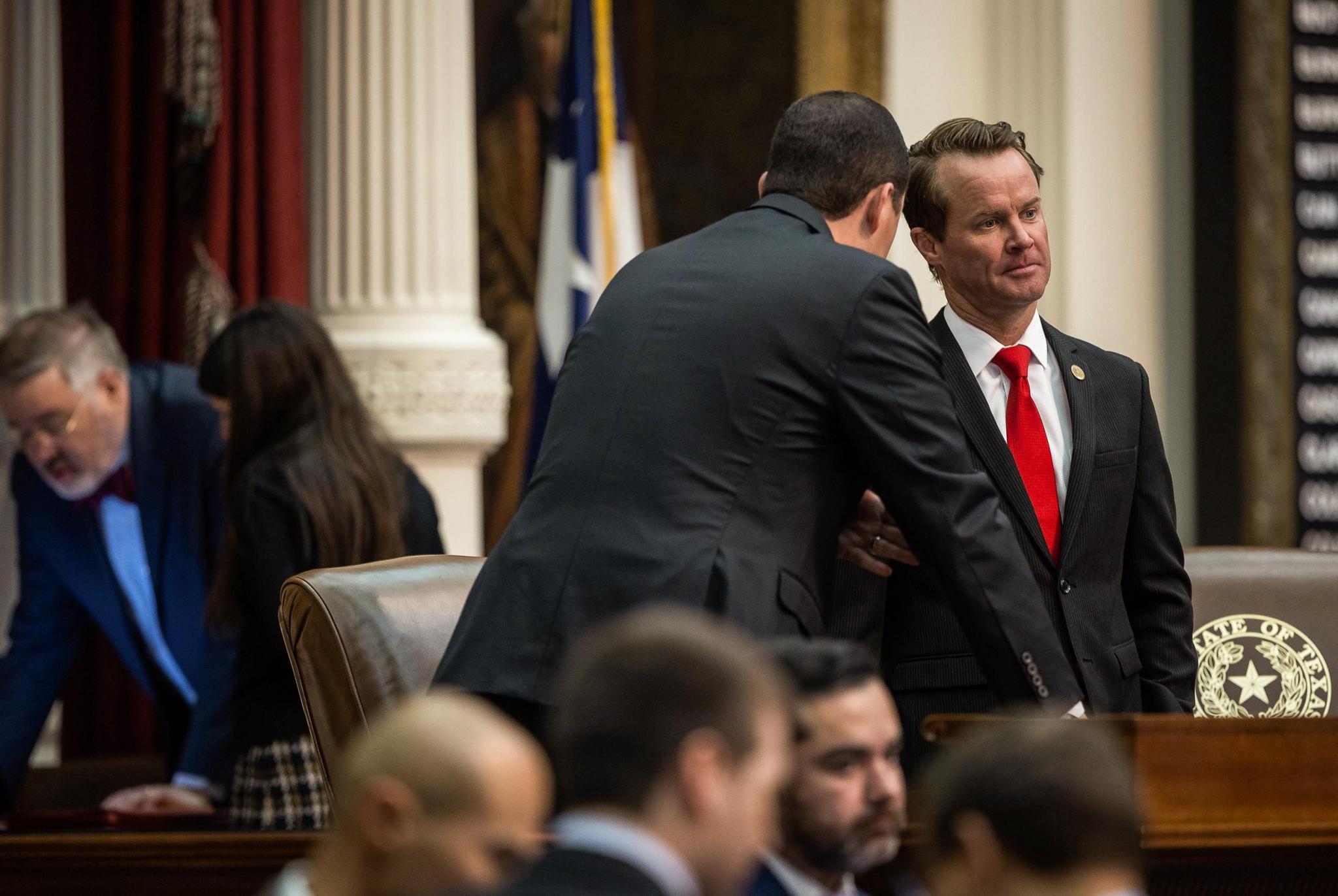 Texas House Speaker Dade Phelan listened to a colleague while presiding over the chamber Monday night, shortly before the Texas Legislature ended its third special session of the year. Credit: Evan L'Roy for The Texas Tribune

Texas legislators pass most — but not all — of Gov. Greg Abbott’s priority measures in final flurry of lawmaking

The Texas Legislature adjourned from its third special session of the year early Tuesday morning after a final flurry of activity that included agreeing on how to spend billions in federal COVID-19 relief funds, approving a negotiated new congressional map and signing off on a last-minute proposal that will put to voters whether to increase the homestead property tax exemption.

In an 11th-hour effort to deliver on property tax relief, Lt. Gov. Dan Patrick’s top priority for the session, the Senate fast-tracked a constitutional amendment to raise the state’s homestead exemption for school district property taxes from $25,000 to $40,000. That bill sailed through both chambers Monday evening with bipartisan support within hours of it being filed and heads to Texas voters in May.

For the average Texas homeowner, that would translate to roughly $176 in savings on their property tax bill, said state Sen. Paul Bettencourt, the Houston Republican who authored the legislation.

The primary focus of the most recent 30-day special session was to redraw the state’s political maps for the next 10 years, based on new population data from the census. But Gov. Greg Abbott also instructed the Legislature to pass laws on a variety of other priorities and unfinished business from previous legislative sessions this year.

While most of his agenda items were passed into law, state lawmakers did not heed his call to advance legislation to prohibit vaccine mandates by any Texas entity, including hospitals and private businesses. Abbott’s executive order banning the vaccine mandates, however, is still in effect.

House members also balked at Abbott’s call to increase the penalty for illegal voting. Earlier this year, the Legislature passed a sweeping elections bill that will reduce the penalty for illegal voting from a second-degree felony to a Class A misdemeanor, effective in December. But in late September, Abbott, who already signed the bill into law, asked lawmakers to reverse the change in the most recent special session.

Patrick, who presides over the Senate, rallied behind Abbott’s call and pushed the upper chamber to pass the bill quickly. But House Speaker Dade Phelan, R-Beaumont, hit the brakes on the measure, saying in a statement that his chamber would not relitigate the issue.

Abbott has given no indication so far of whether he will call another special session to tackle his unfinished agenda items.

He did not mention the end of the current special session and the fate of his priorities at a speaking event with the Kingwood TEA Party in the Houston suburbs Monday night.

Asked if a fourth special session would be necessary, Abbott declined to say.

One of the biggest tasks for lawmakers during the special session was to redraw the state’s political maps based on the latest census data.

Those numbers, which were delayed largely due to the pandemic, showed that people of color fueled 95% of the state’s population growth over the past decade. However, the negotiated maps for Congress, the House, the Senate and the State Board of Education did not add new districts where eligible voters of color would be the majority.

Instead, the new maps — which could change due to legal challenges that are already underway — are focused on solidifying the GOP’s stronghold across the state and protecting incumbents.

The Legislature sent to Abbott’s desk legislation that would restrict transgender student athletes from playing on school sports teams that align with their gender identity. The measure had failed multiple times during previous attempts this year.

Lawmakers also decided how to dole out roughly $13 billion in federal COVID-19 relief money to state agencies, employees and industries.

In the negotiated version of this session’s Senate Bill 8, lawmakers earmarked $7.2 billion for the state’s unemployment compensation fund, which was overloaded last year by record claims, along with $2 billion for surge staffing at hospitals and the operation of regional infusion centers. The legislation also included over $500 million for broadband infrastructure.

In other unfinished business, the chambers also agreed to provide roughly $3.3 billion to higher education institutions across the state for capital construction projects. The negotiated deal on Senate Bill 52 includes funding for a multipurpose education and training center at Texas A&M University-Commerce and an academic building at the University of Houston at Sugar Land, which were not in the Senate’s original plan.

Sen. Brandon Creighton, R-Conroe, said the deal hammered out by the two chambers will also create new guidelines for the allocated funds, which will be overseen by the Texas comptroller’s contract advisory team and be reported to the Legislative Budget Board’s contracts database.

It will also change the name of tuition revenue bonds to capital construction assistance projects.

“This legislation will forever change and reform the way we consider these capital projects in the future,” Creighton said.

Lawmakers were able to reach agreement on a bill to protect dogs from harmful restraints. The Legislature passed a similar bill earlier this year, but Abbott vetoed it saying its provisions were too specific and risked “over-criminalizing” dog owners who did not abide by the letter of the law.

On Monday, Sen. Eddie Lucio Jr., D-Brownsville, said lawmakers from both chambers had agreed to strip a House amendment that would have allowed dog owners to use chains to restrict their dogs. He said Senate Bill 5 would let law enforcement officials take immediate action to help dogs without having to wait the currently mandated 24-hour waiting period and would require tethered dogs to have adequate shelter in extreme weather.

“Please join with me in getting this long overdue legislation finally passed,” said Lucio, who has seven dogs.

Both Patrick and Phelan sounded as though they did not expect a fourth special session, with the speaker at one point joking that the bill filing period for the next regular session starts in 13 months.

And Patrick, acknowledging that lawmakers, who are usually only in session five months every two years, had been in session for nearly 10 months, wished the Senate a happy Thanksgiving and Christmas and congratulated the senators on their work.

“It was a masterful session. Everyone worked so hard,” he said. “You’ve accomplished a lot.”

Patrick Svitek and Joshua Fechter contributed to this report.

Disclosure: The Texas Comptroller of Public Accounts, Texas A&M University and the University of Houston have been financial supporters of The Texas Tribune, a nonprofit, nonpartisan news organization that is funded in part by donations from members, foundations and corporate sponsors. Financial supporters play no role in the Tribune’s journalism. Find a complete list of them here.

This article originally appeared in The Texas Tribune at https://www.texastribune.org/2021/10/19/texas-legislature-redistricting-property-tax-vaccine-mandates/.