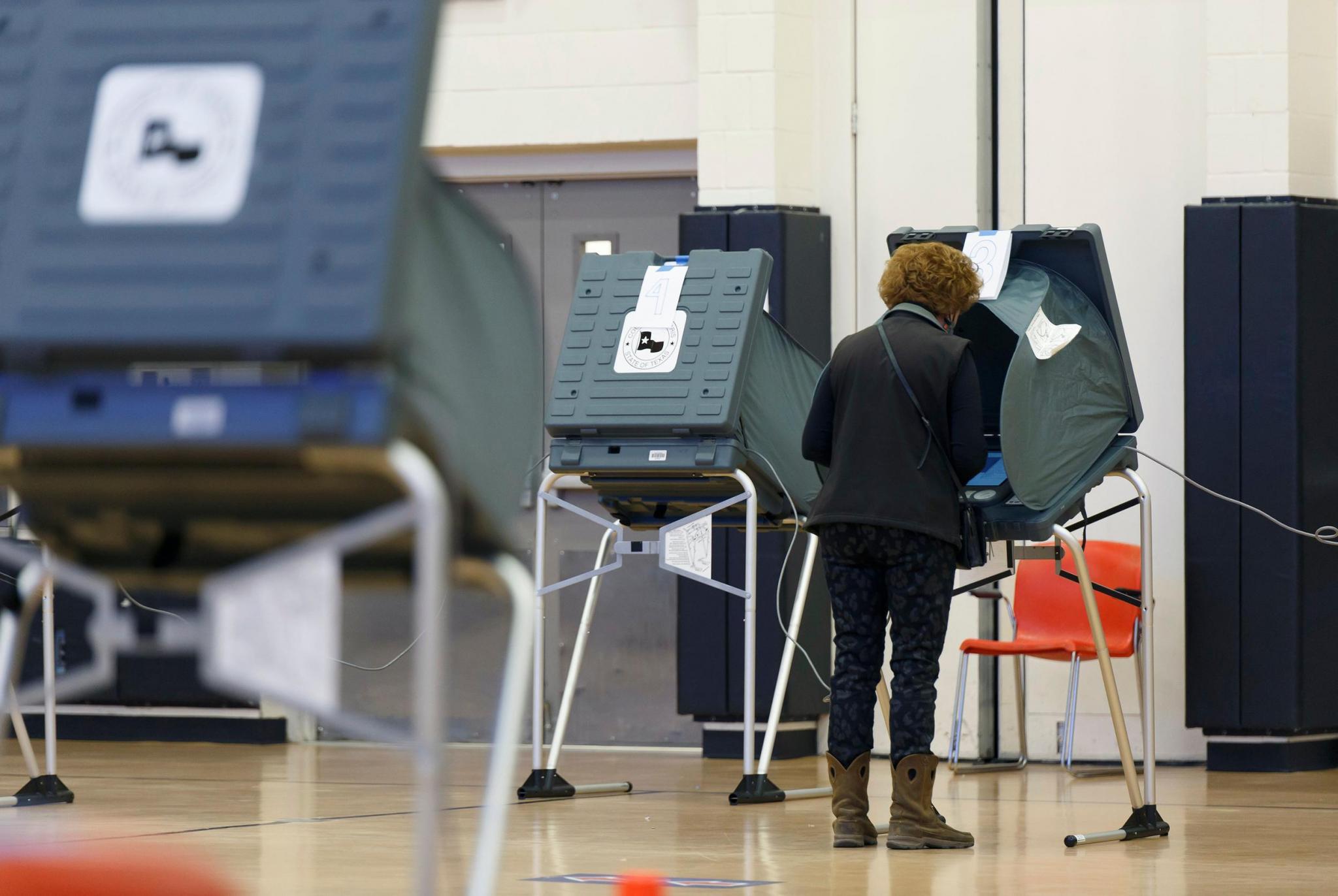 Like other proposals under consideration at the Texas Capitol, many of the restrictions in Senate Bill 7 would target initiatives championed in Harris County to make it easier for more voters to participate in elections. Credit: Michael Stravato for The Texas Tribune

In an overnight vote after more than seven hours of debate, the Texas Senate signed off on Senate Bill 7, which would limit extended early voting hours, prohibit drive-thru voting and make it illegal for local election officials to proactively send applications to vote by mail to voters, even if they qualify.

The legislation is at the forefront of Texas Republicans’ crusade to further restrict voting in the state after last year’s election. Although Republicans remain in full control of state government, Texas saw the highest turnout in decades in 2020, with Democrats continuing to drive up their vote counts in the state’s urban centers and diversifying suburban communities.

Like other proposals under consideration at the Texas Capitol, many of the restrictions in SB 7 would target initiatives championed in those areas to make it easier for more voters to participate in elections.

The bill — deemed a priority by Lt. Gov. Dan Patrick — now heads to the House for consideration after moving rapidly through the Senate. Just two weeks after it was filed, a Senate committee advanced it Friday. That approval followed more than five hours of public testimony, largely in opposition over concerns it would be detrimental to voters who already struggle to vote under the state’s strict rules for elections.

While presenting the bill to the Senate, Republican state Sen. Bryan Hughes said the legislation “standardizes and clarifies” voting rules so that “every Texan has a fair and equal opportunity to vote, regardless of where they live in the state.”

“Overall, this bill is designed to address areas throughout the process where bad actors can take advantage, so Texans can feel confident that their elections are fair, honest and open,” Hughes said.

In Texas and nationally, the Republican campaign to change voting rules in the name of “election integrity” has been largely built on concerns over widespread voter fraud for which there is little to no evidence. More recently, Texas Republican lawmakers have attempted to reframe their legislative proposals by offering that even one instance of fraud undermines the voice of a legitimate voter.

But Hughes was met by fierce opposition from Senate Democrats who took turns arguing the legislation would make wholesale changes to address isolated — and rare — incidents of fraud at the expense of voting initiatives that were particularly successful in reaching voters of color.

“As I see this bill, it’s a pure case of suppression. There are some things in here that are really offensive,” said state Sen. Borris Miles, D-Houston. “This hurts to the core.”

The bill originally limited early voting hours from 7 a.m. to 7 p.m., curtailing the extended hours offered last year in Harris County and other large counties where voting ran until 10 p.m. for several days to accommodate people, like shift workers, for whom regular hours don’t work. The bill was rewritten before it reached the Senate floor to allow for voting only between 6 a.m. and 9 p.m.

But those hours will still prohibit the day of 24-hour voting Harris County offered last November. The legislation would also outlaw the drive-thru voting set up at 10 polling places in the county for the general election.

While questioning Hughes, Democratic state Sen. Carol Alvarado of Houston referenced an analysis by Harris County’s election office that estimated that Black and Hispanic voters cast more than half of the votes counted both at drive-thru sites and during extended hours.

“Knowing that, who are you really targeting?” Alvarado asked.

“There’s nothing in this bill that has to do with targeting specific groups. The rules apply across the board,” Hughes replied.

In defending the portions of the bill that target Harris County’s initiatives, Hughes in part pointed to the limitations he claimed drive-thru and overnight voting presented for poll watchers’ oversight, characterizing them as the “eyes and ears of the public.” Poll watchers are not public watchdogs but instead inherently partisan figures, appointed by candidates and political parties to serve at polling places. And poll watchers did have access to observe drive-thru and 24-hour voting last year.

If passed into law, the legislation would broaden poll watchers’ access at polling places, even giving them power to video record voters receiving assistance in filling out their ballots if the poll watcher “reasonably believes” the help is unlawful. That provision has drawn particular concerns about possible intimidation of voters who speak languages other than English, as well as voters with intellectual or developmental disabilities who may require assistance through prompting or questioning that could be misconstrued as coercion.

The collection of civil rights organizations that have warned the bill could lead to disenfranchisement of voters of color and voters with disabilities did see one of their most prominent concerns addressed in the version of the bill passed by the Senate.

Texas allows people looking to vote by mail based on a disability to request a ballot for an individual election or apply once for ballots in every election in a calendar year. Originally, the bill would have required voters citing a disability to provide proof of their condition or illness, including written documentation from the Social Security Administration or a doctor’s note, to qualify for the latter. Hughes endorsed an amendment by state Sen. Judith Zaffirini, D-Laredo, to nix that requirement, citing the “confusion” it had created and feedback from advocates for people with disabilities.

But Republicans rejected more than a dozen amendments offered by Democrats to strike other portions of the bill and to clarify language on how local elections officials could make vote-by-mail applications available to voters seeking them. They also rejected an amendment that appeared to affirm the right to vote.

Just before the Senate’s vote to advance the bill, state Sen. Royce West of Dallas criticized Republicans for not listening to Democrats’ concerns about how the bill would harm communities of color represented by senators of color — all of whom are Democrats — who have faced a legacy of suppression when it comes to voting.

“I hope that one day you hear us — not only hear us but listen to us,” West said. “Passage of this bill tonight makes clear that on these issues you have not understood our plight in this country.”

SB 7’s prohibition on sending vote-by-mail applications to voters who haven’t requested them comes after a pandemic-era election that saw a significant increase in votes cast by mail as voters tried to keep safe from a deadly virus. Other Texas counties proactively sent applications to voters 65 and older, who automatically qualify to vote by mail, but Harris County came under Republicans’ scrutiny for attempting to send applications to all 2.4 million registered voters in the county with specific instructions on how to determine if they were eligible. The Texas Supreme Court ultimately blocked that effort.

Texas Republicans’ attempt to prevent a repeated of that echoes efforts in other states, including Georgia, where Republican lawmakers recently passed a similar prohibition. After voters of color helped flip key states into the Democrats’ column during the presidential election, Republicans have channeled their myth that the election was stolen into legislative pushback in state capitols across the U.S.

Hughes rejected Texas Democrats’ inferences throughout the debate that his bill is part of a national push from his party. He noted that aspects of SB 7 carried over from failed legislation proposed during the 2019 legislative session.

“If we focus on the provisions of this bill — not what the feds are doing but what’s in this bill and Texas elections — we’ll have to agree these are provisions that will apply across the board, they’re consistent, they’re fair,” Hughes said.

But Democrats pointed to the focus on increased voting regulations in diverse, urban areas. Beyond the restrictions targeting Harris County, the legislation would also set specific rules for the distribution of polling places in only the handful of counties with a population of at least 1 million — most of which are either under Democratic control or won by Democrats in recent national and statewide elections.

“It’s a strange, strange coincidence that all of these laws are being filed right now,” West said. “That’s all I’m saying.”

This article originally appeared in The Texas Tribune at https://www.texastribune.org/2021/04/01/texas-voting-restrictions-legislature/.