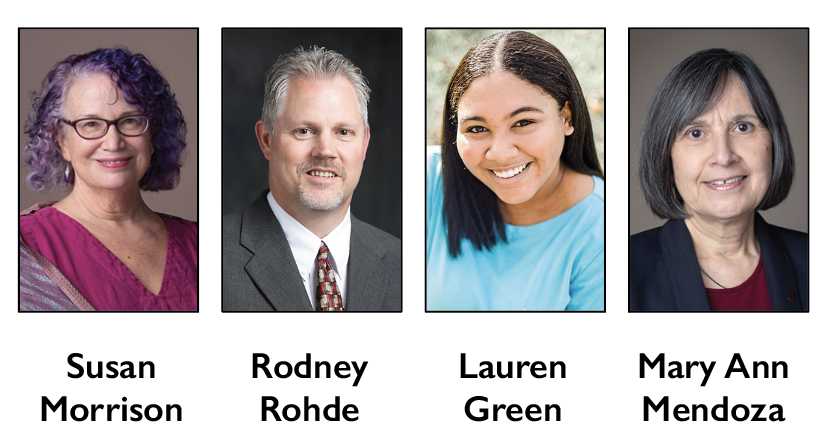 The board approved the honors during its quarterly meeting Nov. 18 in Huntsville.

The Regents’ Professor designation honors outstanding members of the System’s professoriate who have achieved excellence in teaching, research, publication and community service, while demonstrating an unwavering dedication to their students and university. Morrison and Rohde are the 19th and 20th TSUS Regents’ Professor to be honored at Texas State.

It is a lifetime designation bestowed by the Board of Regents upon tenured full professors who have been acknowledged as exceptional by their peers and students, and recommended by the TSUS Foundation Board of Directors, the chancellor and their university president.

Morrison came to Texas State in 1993 from California State University, Fullerton. She earned her A.B. degree from Swarthmore College, Pennsylvania, and completed her master's and Ph.D. in comparative literature from Brown University.

Morrison has published four books and monographs along with more than 45 journal articles and book chapters. She is the author of the novel Grendel's Mother: The Saga of the Wyrd-Wife and served as editor of Home Front Girl: A Diary of Love, Literature, and Growing Up In Wartime America and Another Troy.

She has garnered numerous awards and recognitions for her creative and scholarly work, including two Word on Wings Young Adult Book Awards and gold medals in College Nonfiction and Historical Young Adult publishing. In 2021 she was named Texas State University Distinguished Professor of English.

During her career at Texas State, Morrison has introduced more than 25 new courses to the curriculum, led study abroad programs in the United Kingdom and an exchange program in Germany; chaired or served on more than 40 master's thesis committees; and has been recognized with three Sigma Tau Delta Professor of the Year awards and four Alpha Chi Favorite Professor awards.

Rohde came to Texas State in 2002, having previously served as a laboratory scientist for the Centers for Disease Control and the Texas Department of State Health Services. He earned his B.S in microbiology, his M.S. in biology and his Ph.D. in education from Texas State University. He is a board-certified specialist in virology, microbiology and molecular biology by the American Society of Clinical Pathologists.

He has authored two books, 16 book chapters, more than 100 peer-reviewed articles and served on three editorial review boards. Rohde has been awarded more than $800,000 in external funding and presented more than 120 refereed conference papers. He has given more than 100 invited talks.

Rohde has garnered numerous awards and recognitions for his expertise, including being named to the 2020 Pathologist's Power List and receiving the J.V. Irons Award for Scientific Excellence in recognition of the elimination of canine rabies from Texas. In 2021 he was named Texas State University Distinguished Professor of Clinical Laboratory Science.

During his career at Texas State, Rohde has integrated his research and teaching to provide a rich learning experience for his students. He has taught a wide range of courses, supervising more than 150 undergraduate capstone projects and serving on six dissertation committees and seven master's committees. He has also received numerous national, state and local teaching and mentoring awards.

Green, the fifth Regents’ Scholar at Texas State, is a senior from Pearland. Regents’ Scholars are selected by the chancellor based on outstanding academic achievement and scholarship, leadership abilities, and contributions to the institution and their community. In addition to a framed resolution and medallion, Regents’ Scholars receive $2,500 credited toward their educational expenses.

Green has a cumulative grade point average of 3.85 and has earned Dean's List recognition every semester since spring 2019. She is an inductee into the Council of Scholars, was honored with the Texas State Boko Awards Program of the Year for spring 2020 and was named 2021 Student Employee of the Year.

Mendoza is the fourth Regents' Staff Excellence recipient from Texas State. The Chancellor of the Texas State University System annually selects an exceptional staff member from one member institution to receive the Regents' Staff Excellence Award. The award recognizes staff who excel in six areas: commitment to the university and its mission; job competency; collegiality; duration of service; community involvement; and exceptional achievement.

Mendoza came to Texas State in 1978 as a secretary, working her way up through the ranks from that position to administrative secretary, administrative assistant and ultimately executive assistant to the president. She has served the last five Texas State presidents and has organized more than 100 commencement ceremonies, 40 university convocations and dozens of TSUS Board of Regents meetings.

During her tenure, Mendoza has witnessed firsthand and contributed to Texas State’s impressive growth from a campus of 15,000 students to more than 38,000 students. She has demonstrated great attention to detail and has upheld the highest level of quality control and confidentiality. She is often the first person to arrive at university events and the last person to leave.

Mendoza, a Texas native, spent most of her life in Kyle, where she picked cotton as a child along with her siblings and attended schools where Hispanic and Anglo students were placed in separate classrooms. She has also demonstrated deep community involvement, serving as president of the Hays Consolidated Independent School District Parent Teacher Organization and volunteering with St. Anthony Marie de Claret Catholic Church.