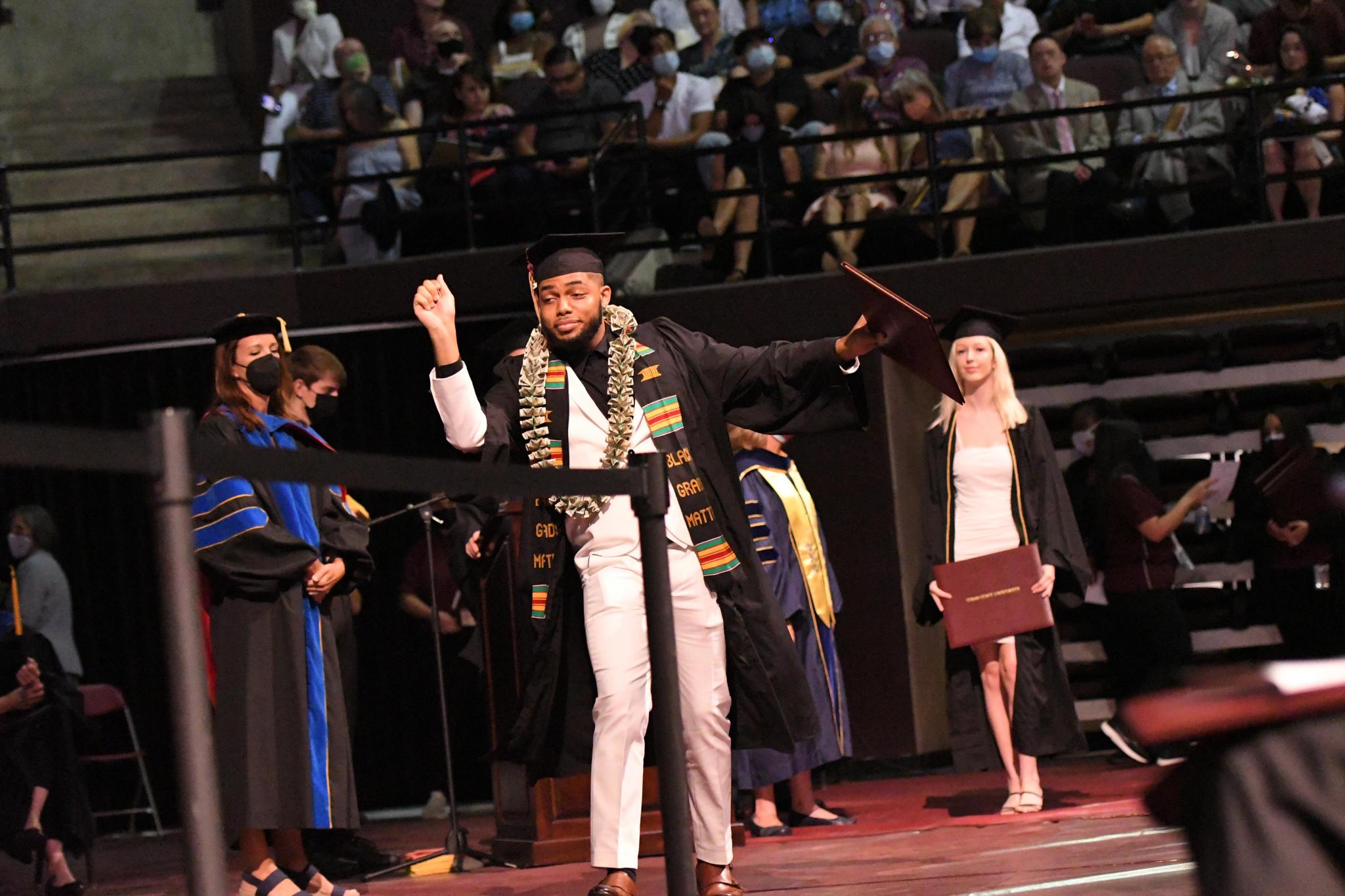 Texas State University is set to host three commencement ceremonies on Aug. 6 where over 1,400 candidates for bachelor's, master's and doctorate degrees will participate. Above, a graduate celebrates after receiving his degree in August 2021. Daily Record file photo by Gerald Castillo

Texas State University will host three commencement ceremonies where more than 1,400 candidates for bachelor’s, master’s and doctoral degrees are expected to participate.

Dr. Dionicio "Don" Flores — a member of the Texas State University System Board of Regents and a Texas State Distinguished Alumnus — will serve as the keynote speaker during the 10 a.m. ceremony on Aug. 6.

Flores received his Bachelor of Arts degree in journalism from TXST in 1973. Flores previously served as the chairman of the TSUS Board of Regents, past president of the Texas State University Alumni Association and a member of Texas State’s Development Foundation.

Flores earned Texas State’s Distinguished Alumnus Award in 1994. He was later named a member of the School of Journalism and Mass Communication’s Hall of Fame in 2004. The university awarded Flores with a Doctor of Laws degree, honoris causa, in 2015.

During his journalism career, Flores joined Gannett in March 1985 where he held editing and management positions at the Tucson Citizen in Tucson, Ari.; The Santa Fe New Mexican, in New Mexico; the Visalia Times-Delta in Visalia, Calif.; and Gannett West in Reno, Nev. He later received promotions and transfers to Iowa City, Iowa and El Paso.

Flores also served as a journalist and newspaper executive at the Iowa City Press-Citizen in Iowa City where he was the new outlet’s president and publisher. Flores formed Flores Media Consulting after he retired as vice president and editor of the El Paso Times in 2009.

Flores served as a past president of the National Association of Hispanic Journalists. He’s been an active member of numerous industry associations, including the American Society of Newspaper Editors. He served on the Accrediting Council on Education in Journalism and Mass Communications, and was a jurist multiple times in the Pulitzer Prize competitions.

Flores will speak during the commencement ceremony for degree candidates from the McCoy College of Business Administration, College of Applied Arts and Graduate College.

Degree candidates from the College of Liberal Arts, College of Science and Engineering, University College and Graduate College will attend the 6 p.m. ceremony on Aug. 6.

Texas State’s commencement ceremonies will take place inside Strahan Arena at the University Events Center. Transportation and parking information is available at txstate.edu/commencement.

The university said there will be no substitute for attending a commencement ceremony in person. Texas State will stream the ceremonies live over the internet for friends and family members who are unable to attend. The live-stream will be available on the Texas State commencement web page at www.txstate.edu/commencement.