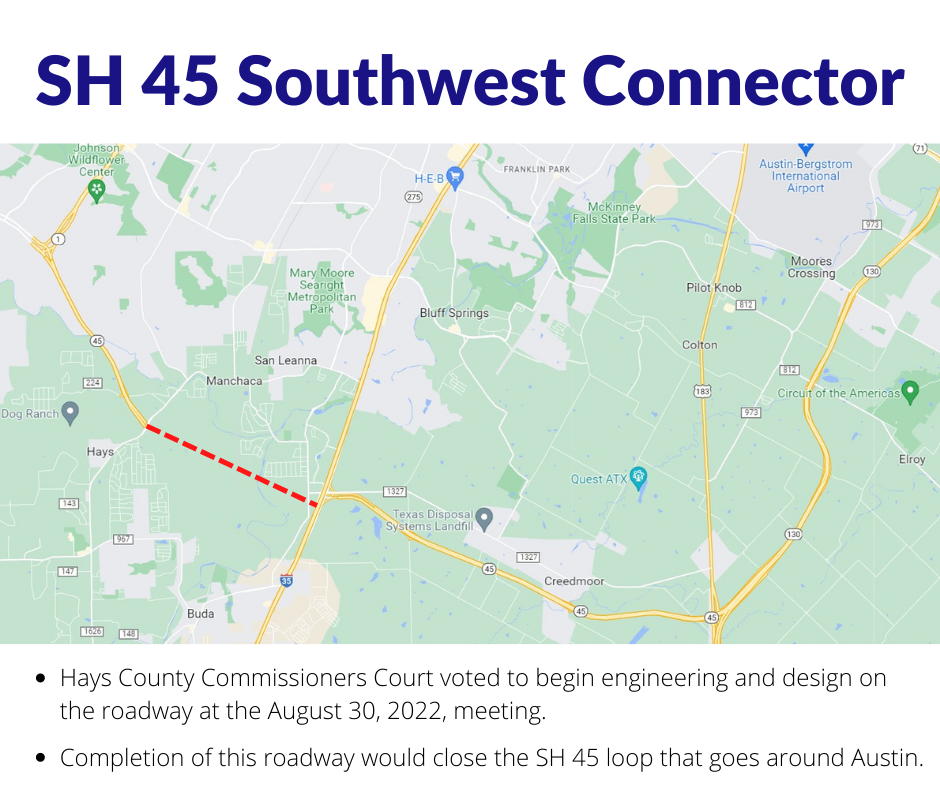 Above, a map depicts where the State Highway 45 Southwest connector would go. Hays County received a rebuke from Travis County for its plan to complete the roadway. Map courtesy of Hays County

Hays County’s decision to move forward with plans to complete the final section of State Highway 45  Southwest has been met with disapproval by the Travis County Commissioners Court.

The Hays County Commissioners Court approved, 4-1, with County Judge Ruben as the lone dissenting voting, to begin the design and engineering process for the roadway during its Aug. 30 meeting. State Highway 45  Southwest would connect the SH 45 loop at FM 1626 with Interstate 35 in Buda. The court selected CP&Y, Inc. to complete the approved services for an estimated $2.5 million.

Travis County, however, rebuked Hays County’s decision with its commissioners court approving to send a letter to Becerra and Hays County outlining disapproval of the project.

“Making the connection from I-35 to FM 1626 would effectively make Mopac an I-35 bypass, dramatically increasing vehicular and truck traffic,” Travis County’s letter reads. “The traffic impacts of this decision by Hays County would have a profound and detrimental effect almost entirely on Austin and Travis County. The fact that there has been virtually no effort to coordinate this action with either Austin or Travis County is unacceptable.”

“I would say very positive as well to the fact that the vast majority, I would say over 90% of the alignment is located in Hays County,” Smith said on Aug. 30. “That being the case, at least one of those members said specifically, ‘Well, it sounds like it needs to be y’all leading the charge on this and keeping us informed on what’s going on.’”

Shea added that while a majority of the road set to be constructed would be in Hays County, it would have a “dramatic and harmful” impact on Travis County and the City of Austin by funneling traffic to Austin through Mopac” and over the Edwards Aquifer and Barton Springs.

Travis County is asking Hays County to halt any progression on the project until it has an opportunity to collaborate with Travis County and the City of Austin to “better understand the regional impact of taking this action,” Shea said.

Travillion reiterated the importance of knowing how communities would be impacted before work is done on infrastructure.

According to the letter, “this connection will increase traffic over environmentally sensitive lands  that include Balcones Canyonlands Preserve lands, City of Austin Water Quality Protection lands, karst features, Edwards Aquifer, endangered species habitat, and conservation easements. The increased traffic and accompanying growth would put the region’s water quality and environment at greater risk.”

The SH 45 Southwest final connection would include two lanes in each direction and would be a toll road similar to the SH 45 connection from FM 1626 to South Loop 1 (Mopac) in South Austin. In a news release, Smith said he hoped the county would break ground on the project within the next two years.

Hays County stated that SH 45’s would be financed by the county and City of Buda to “reduce the burden on each entity.” The county also added that the final section of SH 45 is a part of its transportation plan.

“This has always been in [The Texas Department of Transportation’s] plan. It’s in [the Capital Area Metropolitan Planning Organization’s] plan,” Jones said during the Aug. 30 meeting. “This is something that people in Buda and Hays County have been waiting on a long time. I know they think it’s taken us longer to get here than it should but that’s just part of the process. It’s not going to take us 33 years like it did SH 45 but we’re pushing for it as hard as we can, as fast as we can.”

During Tuesday’s meeting, Shea also stated that she doesn’t believe Hays County is being transparent with residents of Kyle and Buda.

“It’s being sold to those people as a ‘solution’ to help them with their transportation problems,” Shea said. “But, I don’t think they’re conveying to them the reality that traffic from I-35 would then be able to flow through their communities with this connection. So, I don’t think there’s a clear communication of the impacts of connecting this portion of road and it’s being sold as ‘completing the gap’ so it’s a good thing. I understand that we have lots of transportation issues in the region but I don’t think the right approach is for one community to take action that would have a profound effect on the neighbors without having a more complete conversation about it.”