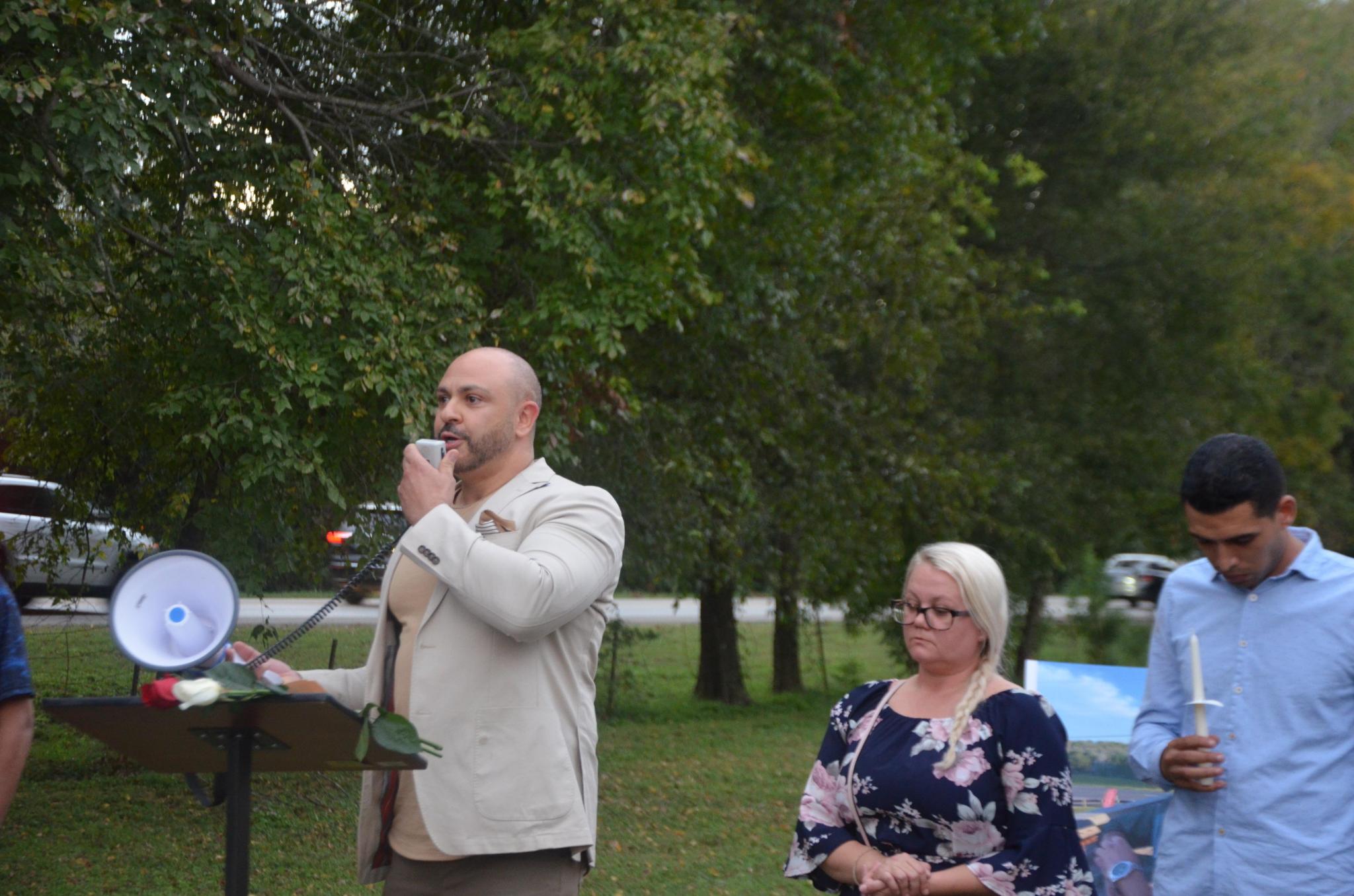 A vigil was held Sunday evening in Martindale to remember Adil Dghoughi who was killed in a shooting. Above, Mehdi Cherkaoui, an attorney representing Dghoughi's family, speaks to the crowd. Daily Record photo by Nick Castillo

'We will find justice for Adil': Family, friends hold vigil to remember life of man killed in Martindale shooting

Adil Dghoughi’s friends and family describe him as a man who loved his family dearly.

His favorite color was red, Dghoughi’s girlfriend Sarah Todd said. He took a cream and two sugars in his coffee. He loved to listen to Janis Joplin. Dghoughi immigrated to the United States from Morocco over a decade ago and obtained his MBA in finance.

Dghoughi was killed in Martindale after he was shot on Oct. 11. Terry Duane Turner, 65, was arrested Friday — charged with Dghoughi’s murder — by the Caldwell County Sheriff’s Office. He posted a $150,000 bond just hours after being booked into the county jail.

“Adil loved everyone and made friends with everyone he met,” Todd said. “He was so giving and so kind. Anything anyone asked of him, Adil would do … He did not deserve to lose his life in this manner. The meaning of Adil is justice — to be fair and just — and we will find justice for Adil and we will not stop until that justice comes to us.”

In a news release following Dghoughi’s death, CCSO stated that deputies responded to the 100 block of Tina's Trail in Martindale for a report of a shooting where they found one man who sustained a life-threatening gunshot wound and was transported to Ascension Seton Hays.

Officials said the shooting occurred after the homeowner confronted a vehicle parked outside the residence. Neither the shooter nor the victim were immediately identified.

According to an arrest affidavit, Turner told deputies that he woke up to use the bathroom and then proceeded to open his front door where he discovered a gray 2016 Audi parked in the driveway next to his pickup. Turner then ran to his bedroom, retrieved a handgun and ran back outside.

Turner told deputies the vehicle “rapidly” accelerated in reverse and he proceeded to chase the Audi. Turner struck the front driver’s side door window twice with his handgun and then fired the weapon, striking Dghoughi. He returned to his residence and called 911, where he stated “I just killed a guy.”

Turner claimed that Dghoughi, “tried to pull a gun on me, I shot,” and “he started racing away and I ran after him. He pointed a gun at me and I shot.”

Deputies, however, did not locate a firearm inside the vehicle or in Dghoughi’s possession, the affidavit stated.

“Self-defense is only a viable option so long as there is harm that is imminent,” Cherkaoui said. “If the harm is retreating, that becomes execution. That becomes cold-blooded murder.”

Cherkaoui said they are only asking for a fair investigation into Adil’s death.

“This is not about someone’s race or someone’s color,” Cherkaoui said. “This is just a human being. This is the bond that we share, we’re human beings. It doesn’t matter where you come from or what your color is. This person had no business doing what he did. So, we call for a fair and transparent investigation. And we call for this case be presented to the grand jury for the grand jury to return the indictment for felony murder and for this man to have his day in court.”

Othmane Dghoughi, Adil’s brother, thanked the crowd gathered just blocks away from where the shooting took place, asking them to pray for his brother.

“He was not a bad person,” Othmane Dghoughi said. “He was a donor, he gave his organs to save American lives. He loved the United States, and he was willing to die for it. Why are they going to take his life away just like that? And treat him like he’s just another life? We need to fight together ... We also need equality.

“I need to tell something to my brother,” Othmane added. “I love you. And, come talk to me from time to time like we always did my brother, I love you. I miss you.”