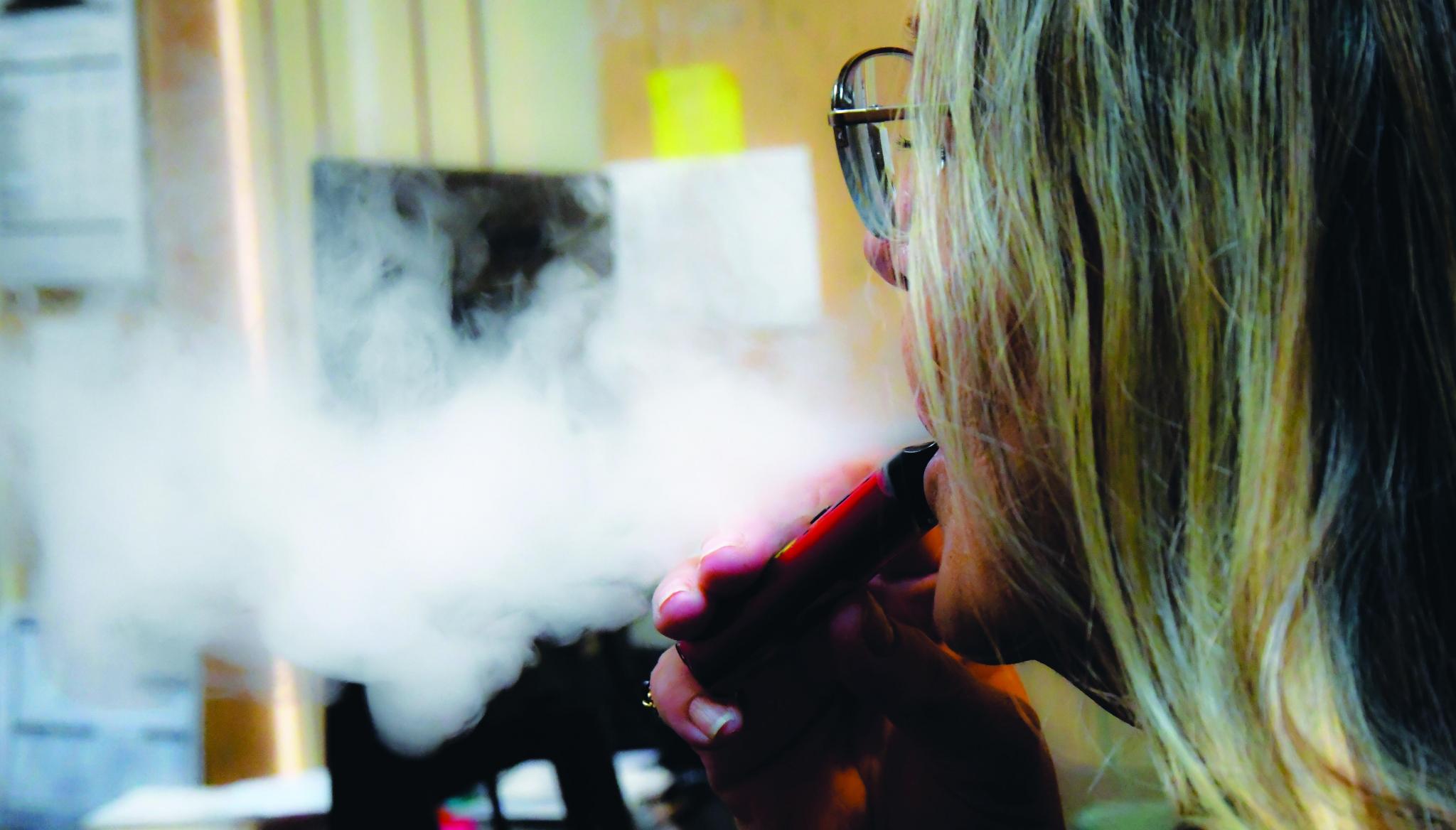 E-cigarettes work by heating a liquid to produce an aerosol that users inhale into their lungs, according to the CDC. The vape can contain nicotine, tetrahydrocannabinol (THC) and cannabinoid (CBD) oils, in addition to other substances. Daily Record photo by Lance Winter

When it comes to vaping epidemic, Hays County not left unaffected

When it comes to the vaping epidemic, Hays County is not left unaffected. Two suspect cases of severe pulmonary disease associated with vaping have surfaced in Hays County, according to Eric Schneider, Epidemiologist for the Hays County Local Health Department.

Vaping has been a cause of concern across the nation, as 1,080 lung injury cases and 18 deaths associated with using e-cigarette products have been reported to Center for Disease Control (CDC) as of Oct. 1. In a report released Oct. 7, the Texas Department of State Health Services (DSHS) confirmed one Texas death from pulmonary illness related to vaping.

Severe pulmonary disease is under investigation by the CDC, DSHS and others, as the “specific chemical exposure(s) causing lung injuries associated with e-cigarette use, or vaping, remains unknown at this time,” according to the CDC.

Though no single product or substance has been linked to all lung injury cases, the CDC reports that most patients report a history of using tetrahydrocannabinol (THC)-containing products.

“The CDC has confirmed that the majority of cases are affiliated with a chemical exposure that could be THC or any other kinds of oil that people are smoking, rather than just smoking the intended product in a vape pen,” Schneider said.

“There’s been decades of research that have been done on how cigarettes affect the body, as far as leading to heart disease, cardiovascular disease, stroke, or even cancer,” he said. “But when e-cigarettes and vape pens came out 10-12 years ago, there was no research that could have been done to find out what the long term effects would be of a human inhaling water vapor. And so now we’re starting to see what will happen when the human lungs take in water vapor since the lungs are not intended to take in water, period.”

The common agent in vaping devices is nicotine, which can be addictive and toxic, as well as increase heart rate, putting an individual at risk for a heart attack, according to Everal Garcia, director of cardio pulmonary services for Central Texas Medical Center. Garcia noted the effect of vaping on adolescents.

“But when it comes to adolescents, American Academy of Pediatrics recently came out with a study that speaks to how it impacts the brain development, which can impact learning and memory and then some long term effects as well,” Garcia said. “So it’s definitely something you don’t want to play with.”

Hays CISD, on the other hand, reported 129 vaping incidents in the 2018-2019 school year in which a student was caught with a vaping device, according to Tim Savoy, chief communications officer for Hays CISD.

“We are seeing incidents of vaping becoming more of an issue at our schools,” Savoy said in an email. “Our Board & Superintendent Student Advisory Panel (BSSAP) actually brought vaping to the attention of our superintendent last year as an area they would like to see more focus.”

Savoy said the district is in the early stages of a multi-prong approach to combat vaping, which includes a step to address the district’s need to be more uniform in the way it reports incidents of vaping.

Garcia encourages parents who have concerns about vaping to reach out to their pediatrician and have discussions with their children early on.

“The way that they’re marketing these vaping devices, I think they have like flavors and things like that, so it’s quite appealing for the kids,” Garcia said. “And so having those discussions early and you know, getting better information from your pediatrician definitely makes sense. I would highly recommend that.”

More information about vaping related illnesses can be found at https://www.cdc.gov/tobacco/basic_information/e-cigarettes/severe-lung-d... and https://www.dshs.texas.gov/vaping/.