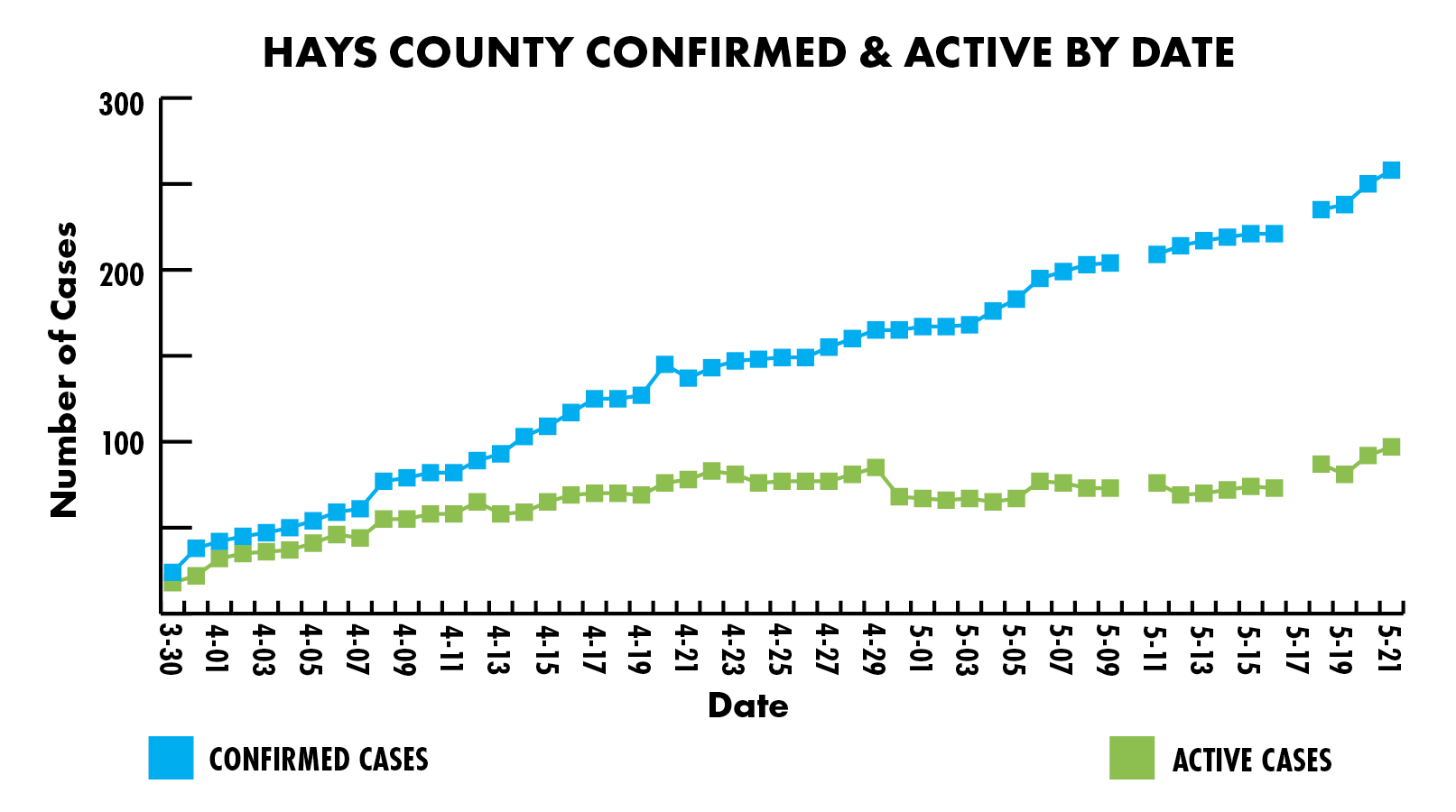 Where is Hays County on the curve?

Hays County Epidemiologist Eric Schneider urges residents to wear masks and reduce activity as much as possible as the COVID-19 pandemic continues, despite broad strokes to reopen coming from the state.

“I understand we have to open businesses and get the economy going but people need to understand this is not over,” Schneider said after Hays County reported its second highest single day of new cases Monday at 14.

The county data shows daily case counts are not slowing down, Schneider explained. As the state opens up more businesses and residents venture outside their homes more often, he expects to see another wave of high rates of viral spread and infection.

City of San Marcos Emergency Management Coordinator Rachel Ingle was not available for comment but has said in several previous interviews that she expects to see another wave of viral spread later in the summer.

While there have been reports showing Texas is one of four states including serology testing in their data, Schneider says Hays County for the moment is only including molecular testing in their counts. Combining the molecular and serology test results in one total could provide an inaccurate picture of where and when the virus spread. The combination also could also overstate a state's ability to test and track active infections which is a key consideration as states ease coronavirus restrictions.

Hays County may begin including serology results in the future by including a separate column in the near future for serology tests as “probable cases.” Since Hays County is not conflating test results, it does have as accurate a picture as it can, considering only 1.3% of the population has been tested. As of Thursday, 3,454 tests have been received by the Hays County Local Health Department. The county has had 258 total cases and has 97 active cases. Twenty-eight county residents have been hospitalized by the disease. Three residents have died since the first diagnosis of COVID-19 within the county on March 14.

Testing closer to 10% of the population is what is needed to have an accurate idea of how deeply the virus has penetrated a community, according to Dr. Rodney Rohde in previous interviews, Chair & Professor of Clinical Laboratory Science (CLS), at Texas State.

Based on the limited data available, Schneider does not believe Hays County has reached its peak infection yet, all the more alarming as it appears the public seems to have gotten an entirely different signal from the reopening; to increase activity and decrease use of wearing masks.

Social distancing initially appeared to help slow down cases mid to late March and flatten the curve locally, Schneider said. He warns that with more and more people going out without masks, and businesses opening where social distancing is impossible like nail salons and barber shops, Hays County will likely see an increase in cases that will defeat the purpose of all the hard work done by the community last month.

The purpose of limiting activity and staying home, or “flattening the curve” is to slow the spread of COVID-19 so the number of people needing hospital care remains below hospital capacity. Increased rates of death were seen in countries where hospitals were overwhelmed.

The reopening indicates the state believes its counties and hospitals can handle another wave of inflection at this point, Schneider confirmed.

Hays County hospitals currently have plenty of bed capacity, Schneider said. If a Hays County resident tests positive for COVID-19 they are transferred out to another hospital depending on the hospital affiliation, usually to San Antonio, Austin or Temple where there is even more capacity.

“This is not over. It’s going to be a few more months before we see a decline,” Schneider said. “I encourage people to wear a mask whenever they are in public. When you put the key in the ignition, ask yourself is that absolutely something you have to do right now? Can it wait a day?”