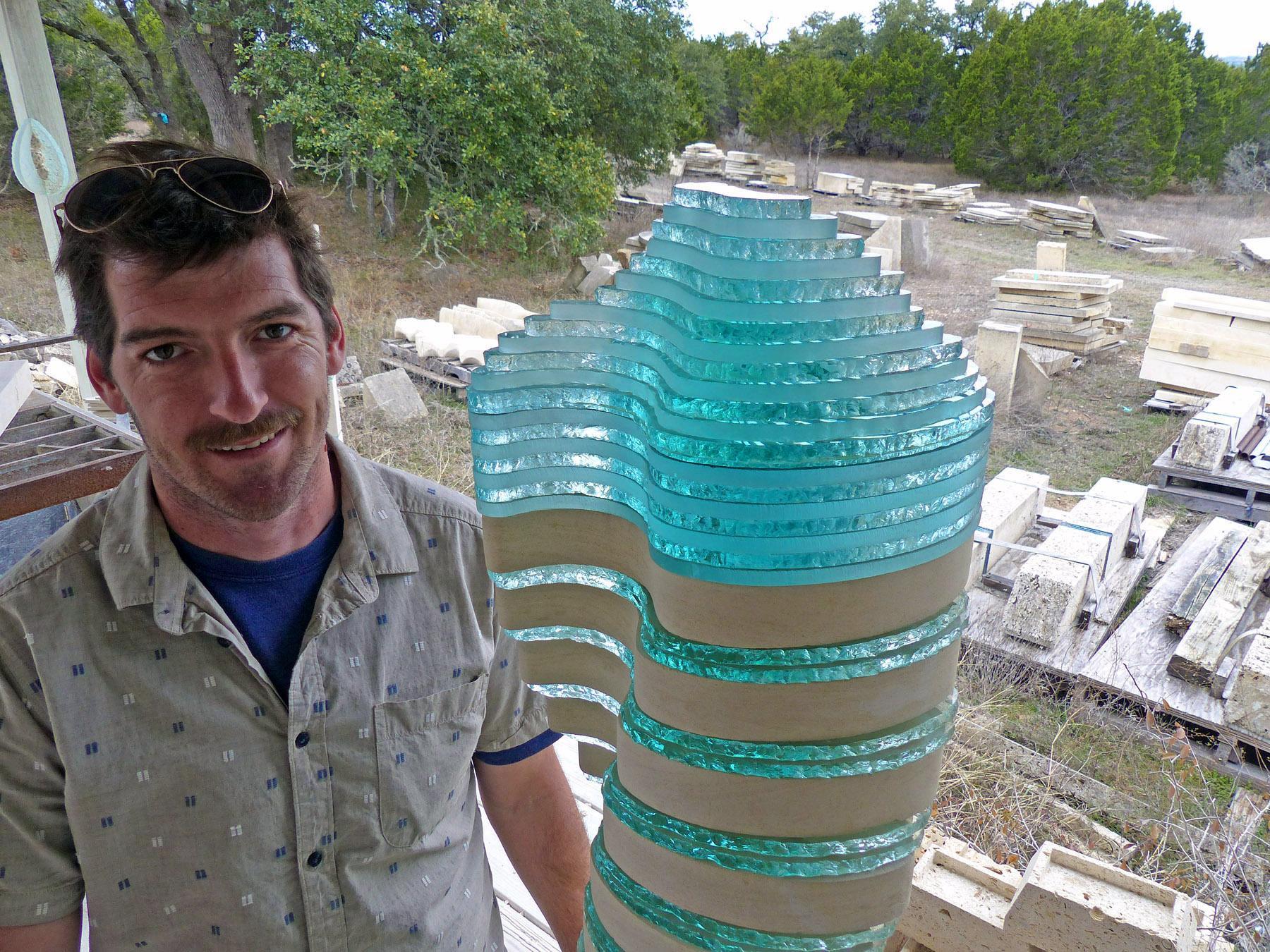 Sculptor J.J. Priour with one of his sculptures on the porch overlooking his limestone boneyard. Photos by Sharon Carter

It wasn’t a week after Wimberley’s epic Memorial Day Flood, when a small group met at the SIP coffee house on the Square, and dedicated themselves to a heartfelt mission.

The mission was to provide a commemorative sculpture as a worthy memorial of the significant trauma and loss of lives swept up in the wake of the Blanco River’s unprecedented flash flood on the night of May 23, 2015. It would also symbolize miraculous survivals and heroic rescues by Hill Country residents who joined hands to “bail out” their river neighbors, and extend goodwill. It reminds us, in a gentle way, to never take for granted the lovely river, which invites us into its crystal clear living waters to cool off and play. The river belongs to all of us.

The Blanco River Monument was intended to belong to the river.

The monument group, led by Jan Fitzhugh and Don Minnick, represented a tiny fraction of the outpouring of 6,000 Wimberley volunteers — many who put their livelihoods on pause for weeks while they literally dug-in and helped the riverfront homeowners clean-up the massive unsanitary jumble of destruction which transformed 350 properties in the river’s angry path, as it rose nearly 45 ft. in just four hours.

Most of the town’s volunteers went back to business-as-usual in the next couple of months, but the monument group continued working to find a riverfront location — for the next four and a half years. The vision was to place the monument in a serene location overlooking the Blanco’s calm bending stream, exposed and sparkling in the sunshine — after the loss of 15,000 trees.

But the riverside vision has been a difficult journey.

Immediately after the 2015 flood, a call was sent out for sculptors, and 20 artists responded. Jurors looked at the designs, and selected 12 to consider for the monument. These artists were given funds to create their models, in due respect for their time and talent as a means to earn a living. Next an event was held at the Wimberley Community Center where the 12 sculptors were present with their model designs on display, and the public was invited to vote.  Each community member was given a dollar to cast as their ballot. 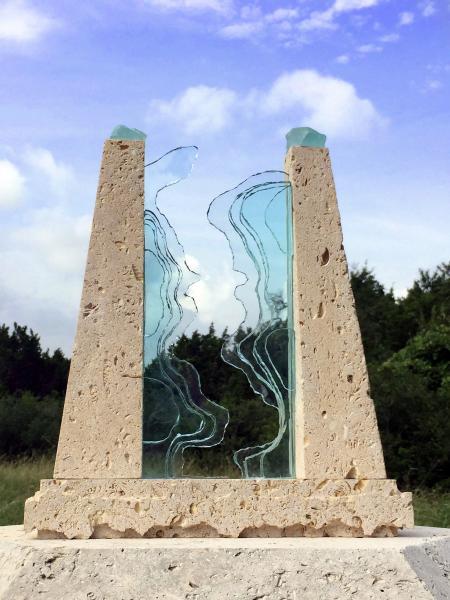 This competition narrowed the favorites down to six.  Fitzhugh and Minnick continued to introduce memorial candidates with their model sculptures in other events to gain votes. During this period, the public was asked to use their own dollars. The picks were narrowed down to three, and the strategy continued in this way for six months, as dollar per dollar was raised for an artist. Generosity was also extended by donors.

J.J. Priour became the community’s chosen artist to create the sculptured monument, which has been “on hold” since early 2016. His beautifully crafted model represents the Blanco River’s flow as sparkling aqua glass flanked on either side by a limestone bed. Raised like pillars, the carved limestone salutes the strength of the earth and the Wimberley community. The piece is finally in production.

“Since it has been so long, I did feel like the project had fallen off the map, but I am very glad that folks still care about it, and I can move forward in providing this symbol for the community,” said Priour.

This local young artist grew up on his parent’s ranch on Hamilton Pool Road, where he got involved, at an early age, with the limestone/glass creations produced by his father.  As the son of nationally renowned Texas sculptor Damien Priour, J.J. continues in his father’s tradition, devising his own sculptures in his late father’s studio workshop on the property. Even though he earned a degree in International Business, J.J. determined that he found his true calling as a sculptor with these materials. “Creating gives me a feeling of freedom,” he said.

The typically historic Texas pole shed workshop holds a large inventory of sculptures, a wall covered by tools, diamond-bladed saws, and heavy equipment, which surround two glass/limestone chairs, side by side - each built by father and son. The building’s porch overlooks a wooded patch of land stacked with quarried blocks of fossilized limestone, the same substance which forms the hilly ground of this part of Texas, shaped by ancient aquatic life.

While the Priour ranch commands a view of Texas Hill Country now being transformed by development, J.J. says the ranch will never be sold. The natural land provides the beautiful material and inspiration that creates a meaningful bond embraced by the Priours. 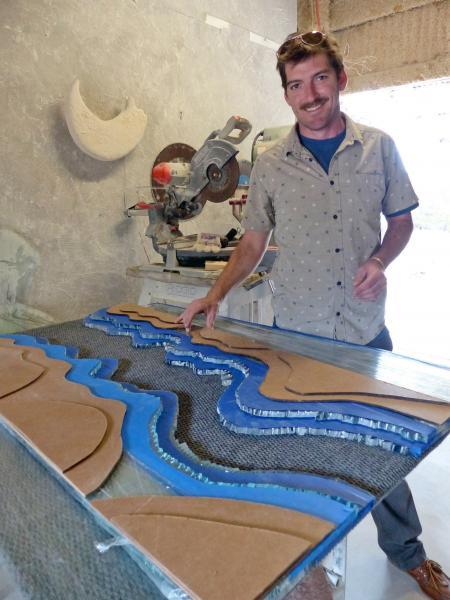 Priour layering the glass to be cut with the templates for Monument.

QUEST FOR A LOCATION:

The search began in 2015 for a landowner along the river who would eagerly accept the beautiful sculpture. However, the quest for a riverside spot, for the monument to be placed, turned into a long journey of highs and lows with as many bends as the Blanco.

It is unfortunate that there is no property along the Wimberley portion of the Blanco offering public access to the river.  Ensured and protected by the Texas State Constitution, the river belongs to the public for use. Other states often require private property owners along water to provide an avenue of access for the public, however Texas does not. [Texas Parks & Wildlife has an overview of Texas River Law; principally, a river acts as a public “right-of-way,” whether bathing, boating, tubing, or walking a dry bed, as one stream joins another.]

Since all property along each side of the river is privately held, with no freely provided public access, this placed the fate of the monument at the mercy of “goodwill.” At first, finding a private property owner to embrace the memorial did not seem to be a hurdle to Fitzhugh and Minnick. After all, 6,000 volunteers had rallied in “goodwill” to rescue owners and clean up their damaged properties. So with a positive attitude, Fitzhugh and Minnick set out contacting property owners near the Blanco River Bridge and riverside locations to ask for placement of the sculpture in some way.

About five property owners responded to the call, and at times Fitzhugh thought they had a promise. It could take a year or more to negotiate with an owner before a placement for the sculpture fell through. Some property owners would be traveling, or would only communicate in person — not email or phone calls. In almost every case, multiple family members became involved, and regardless of the number who favored acceptance, vetoes prevailed.

Former Mayors Steve Thurber and Mac McCullough helped out along the way, and in particular, made an effort to assist the monument group in securing a tract of land adjacent to the Blanco River Bridge, which had been for sale for some years. The Wimberley property owner extended obliging goodwill and considered donating his riverside lot for the memorial.  Working with the mayors and the owner, Fitzhugh and Minnick made big plans. These plans included a flood education center, and architectural designs were produced by Rick Burleson. Arborists were brought out to care for the mighty 300 year-old live oak perched on the tract above the water. The tree would tell the story of life on the river. Busloads of school children would visit. Visions and heads swelled.  But, as had happened before, the property owner changed their mind. Goodwill took a dive into a hot mess.

Other venues were considered, with the generous aid of various citizens involved with the monument group. These included the vision of Bert Ray’s walkway along the tree tops to a small park along Cypress Creek; Cypress Creek Nature Trail Park; the RR12 Roadside Park near the Junction; the Triangle by Ace; and remote spots further up or down the river.  Each of these had drawbacks or conflicts, which took the monument far from the river locale vision.

Because the search went on for so long the Wimberley Valley Arts & Culture Alliance, guardian of the necessary funds for this project, ceded the project to the Wimberley Valley Art League.  By this time, it seemed exhaustive. Now EmilyAnn Theatre & Gardens has offered to accept the Blanco River Monument to place along side its US Veterans Memorial. This may happen before the Butterfly Festival in April, when the sculpture is completed. Keep Wimberley Beautiful has been gifted with a large donation to landscape the area around the monument, wherever it is placed.

Because EmilyAnn is far from the river, the possibility of a riverside location remains open until then.