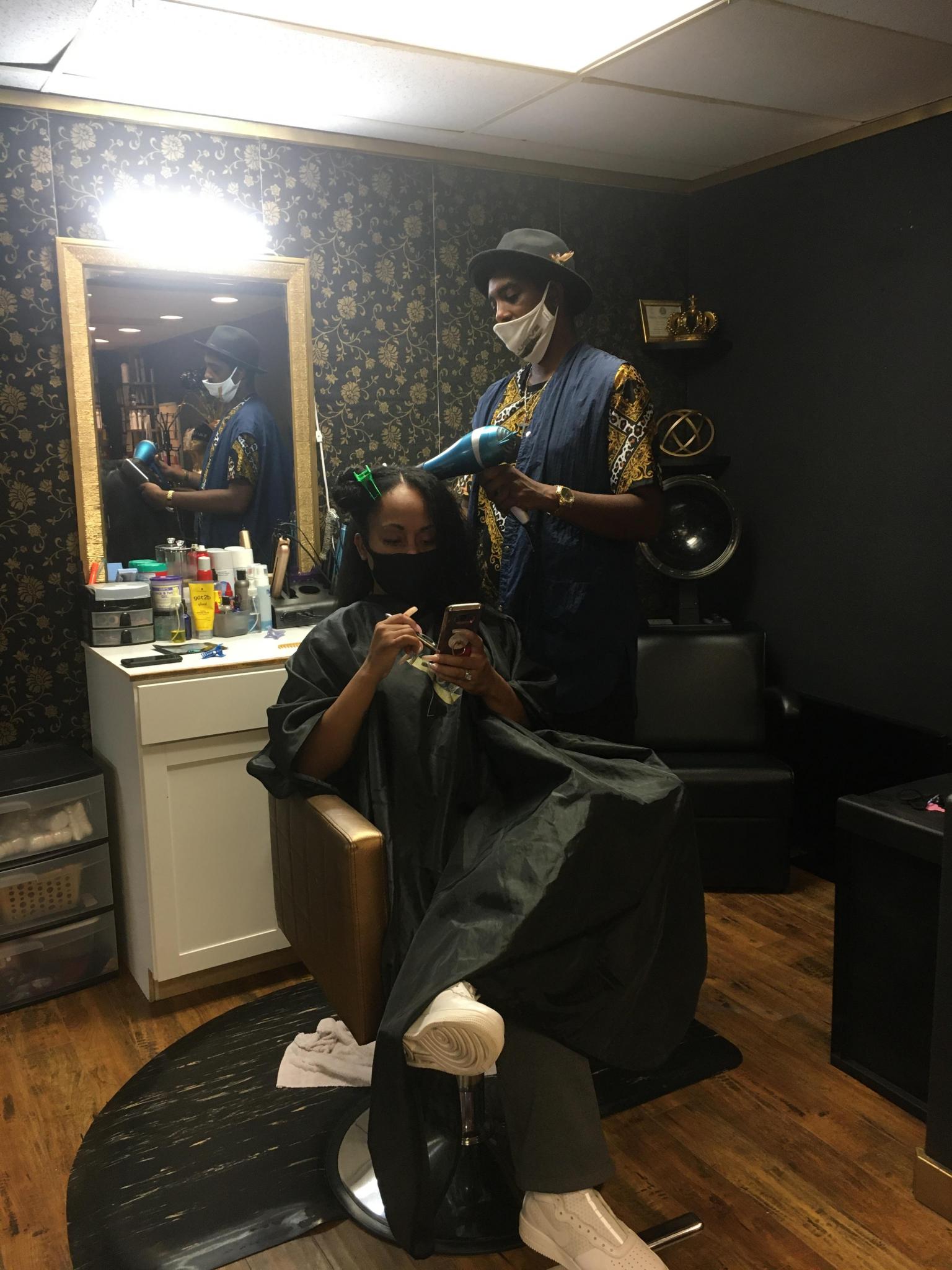 Editor’s note: This story is the second story in a series highlighting Black-owned businesses in San Marcos. If you are interested in being featured, please contact sgates@sanmarcosrecord.com

San Marcos’ only black owned hair studio is celebrating its first year in business, but owner Maylan Buffin has been in the business of making people feel their best for 20 years. He and his spouse Marcus Brown opened X’Clusive Hair Studio in July 2019.

Buffin started out doing his little sister’s hair, learning to plait when his mom was working two jobs. After graduating from San Marcos High School, he trained at a salon in Austin and loved being, “out in the real world doing hair.”

“I love working with people,” said Buffin, “so I’ve always wanted that salon atmosphere talking with different people about different opinions and their different backgrounds.”

Originally from San Antonio, Buffin returned in 2015 and opened a salon called X’Clusive We to be his own boss.

Buffin gathered quite a following over the years, in Austin, at his San Antonio salon for 2 years and in Dallas for six months.

San Marcos resident Regina Henderson has been a client for more than 10 years, “I followed him wherever he went because he is just that good. I did the San Antonio location, and if he was in Dallas, he would come down and take care of me whenever I needed my hair done.”

Buffin has been working on Henderson’s and her daughter’s hair for years but he doesn’t have their business solely because of his talent.

“He really listens to you. I can tell him exactly what I’m looking for and what style I need,” Henderson said. “He is a really good kind hearted person. He listens and he cares, his focus is to make you look as fabulous as you want to look.”

After a brief stint in Dallas, Buffin’s daughter was diagnosed with Lupus. His time there was cut short by a decision to return home to San Marcos to take care of her.

Buffin was welcomed home by overjoyed clients when they got wind that their favorite hairdresser was finally settling down locally and opening X’clusive Hair Studio, San Marcos’ only Black owned hair salon.

Britney Ralph has been a client for years and known Buffin since she was a little girl. “Every time I go in there it's always a pleasure. He does a great job and I’ve followed him everywhere. It's a convenience for me and my family to have a black owned hair salon in San Marcos.”

Ralph is thankful they opened in San Marcos because not every small Texas community has a multicultural hair salon, she said.

Buffin sees his job as much more than working on outward appearances.

“I love being able to transform someone from feeling insecure about themselves to feeling a little bit better about themselves,” Buffin said. “Doing hair is about making people feel beautiful all the time and without insecurities.”

X’Clusive Hair Studio is a multicultural salon and is versatile in doing all types of hair. Buffin specializes in extensions which is their most popular service, as well as cuts and color.

Elise Kinney, a client of 20 years, was getting her hair done during our interview. She said, “I don’t let anyone else touch my hair. I like that they are multicultural and don’t just do Black hair.”

X’clusive Hair Studio suffered a loss for three months during COVID-19 shut-downs and they are now playing catch-up, Buffin said. Just like most other businesses, they have pivoted to an appointment-only, mask-on model.

“We are in the business of protecting our clients,” Buffin said. “We went to school to know sanitation and protect the scalp, and we now have to be even more careful. We take the extra steps just to make sure that our clients safety is okay and we are safe as well.”

Another way clients have adapted to less frequent services is with units, what used to be called wigs.

“A lot of people are choosing to put less stress on their hair, with what they call units now, it's what most people are doing now. One of the reasons is that we use a lot of heat and that damages the hair,” Buffin explains. “We have to use a lot of conditioner to make it healthy. Some people don’t want to put that stress on their hair anymore and so I make custom units for my clients called quick units that get them through the months when they don’t want to have stress or heat.”

X’Clusive Hair Studio is expanding to include a small boutique in their salon with purses, dresses, sunglasses and jewelry which should be open next week.

They also plan to expand to a catering business offering sweet treats, as part of co-owner and spouse Marcus Brown’s passions.

Brown is a chef who put his career on the back burner to help Buffin promote the salon and has been working tirelessly on this project since its opening.

Brown and Buffin hope to return to their friendly, open door walk in model once it's safe. In the meantime they will continue to serve their community with fabulous hair styling, confidence boosts and now clothing and accessories by appointment.

You can call 512-392-2511 to book an appointment at X’Clusive Hair Studio located at 1904 Old Ranch Rd 12 in San Marcos. For more information visit https://www.bestprosintown.com/tx/san-marcos/xclusive-hair-studio-/.