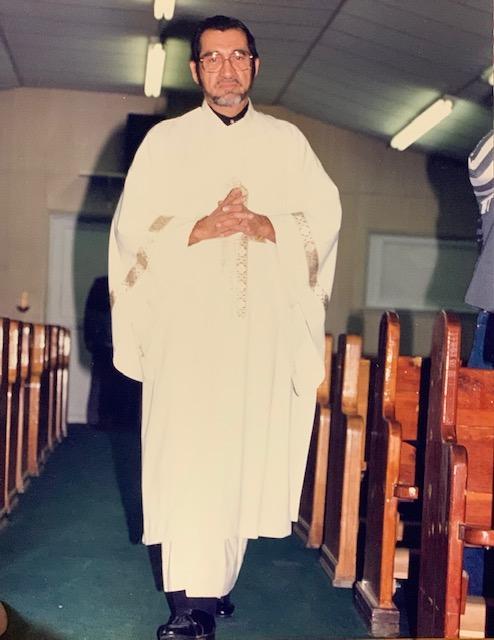 Deacon Everardo “Lalo” Duran of San Marcos, Texas, went to be with our heavenly Father in the early morning hours of Sunday, September 6, 2020 at the age of 92.

He is survived by his loving wife of 69 years, Lupe Duran, along with his children, son, Michael A. Duran Sr. and daughter, Patty Duran Cano with her husband Jimmy Cano. He is also survived by his sister, Olivia Ramirez, of Hondo, Texas.

Lalo was born on December 13, 1927 in Hondo, Texas to the late Manuel Sr. and Maria de Jesus Duran. He left high school early to join the Army for one year before transitioning over to the Air Force in 1946. He served 12 years and was honorably discharged at the rank of Staff Sergeant.

Lalo’s journey in life is one of many stories. He retired from Sears after 25+ years of service. He was involved in various volunteer organizations: Sociedad de Juan Diego, Sociedad Guadalupana, Guadalupe Jamaica Chairperson, Knights of Columbus, La Sociedad Cuahtemoc, Santo Nombre, Crusillos, The Draft Force, and Volunteer Firefighter for Hays County, to name a few.

Wanting to become a servant of our Lord in the Catholic Church and its people, he was ordained a deacon on July 14, 1984 at St. Luis Catholic Church in Austin, Texas. Lalo was assigned as the administrator for St. Michaels Catholic Church in Uhland, Texas for 5 years. His services seemed limitless in the San Marcos area. Lalo would perform marriage, baptismal, and funeral ceremonies, administer the eucharist to the home bound and medical facilities, taught Theology and Catholicism, volunteered at area prisons, and recited rosary services for various occasions.

Lalo is known to be a humble, kind man and his patience was a gift from God like no other. His kindhearted, generous ways were inviting to those who he encountered, and his contagious smile would brighten anyone’s day. Lalo was a huge Dallas Cowboys fan, Lupe would tease him and say “not even wild horses could drag him away from the T.V. when the Cowboys were playing.”

Lalo’s greatest gift was his faith and passion for our Lord and family. Lalo received a letter of recognition from Pope John Paul II for his contributions and hard work, which was one of the most humbling and proudest moment in his years of service as a deacon. In addition, Lalo was able to experience the Pilgrimage of Pope John Paul II in September 1987 in San Antonio, Texas.

Lalo lived a full and happy life with no regrets and lived to spend eternity with his Boss our Lord in Heaven.

Visitation will take place on Friday, September 11 from 3 to 5 p.m. at Thomason Funeral Home in San Marcos. The Rosary is scheduled for 7 p.m. at St. John the Evangelist Catholic Church in San Marcos.

A Celebration of Life and Catholic Mass service will take place Saturday, September 12 at 10 a.m. at St. John the Evangelist Catholic Church, followed by interment at San Marcos City Cemetery where he will be laid to rest next to his grandson, Mark Anthony Duran Sr.

Services are under the direction of Thomason Funeral Home. For more information and to sign the online guest registry, please visit thomasonfuneralhome.com.

“The Lord is my shepherd, I shall not want; he makes me lie down in green pastures.”